Screw Christmas. Forget Hanukkah. To hell with New Year's. There is only one holiday we celebrate in the dank, windowless labs of Movieline's Institute for the Advanced Study of Kudos Forensics, and that is Oscar Night. Thus the latest edition of Oscar Index, offering all the festive year-end joy you can possibly stand. Let's get to it! 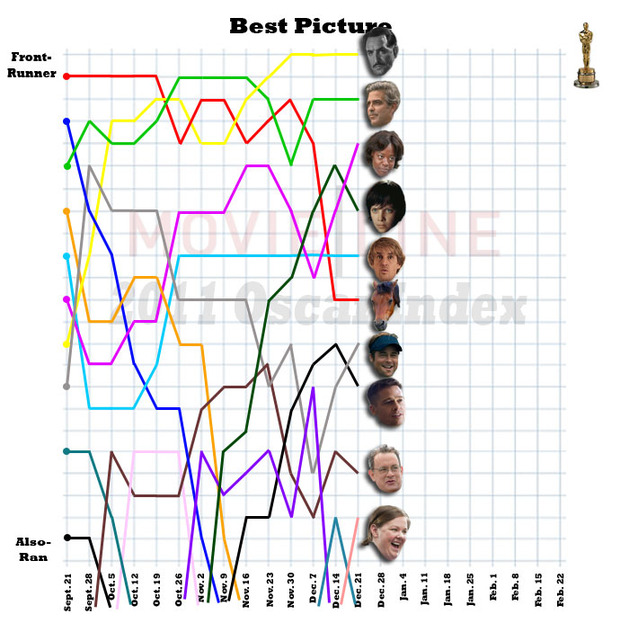 Outsiders: The Girl With the Dragon Tattoo; The Ides of March; Drive; Tinker, Tailor, Soldier, Spy; My Week With Marilyn; Margin Call; Harry Potter and the Deathly Hallows - Part 2

First things first: As usual, the Oscar Index reflects buzz and chatter among the awards cognoscenti. But honestly? Bridesmaids is not going to be nominated for Best Picture at the Academy Awards. OK? It is not going to happen. The only reality I take away from reading such suggestions at Gold Derby is that the likes of Tom O'Neil, Dave Karger, Peter Travers and a handful of others claiming to be that site's "Oscar experts" are in fact garden-variety lushes on their 146th glass of egg nog at the office holiday party. Back away!

Yes, it drew a Best Picture - Musical Comedy nomination at the Golden Globes -- because that's what the Musical/Comedy category is for. Bridesmaids is a very funny and successful (if overlong, but hey) film, and this is the Golden Globes. It is not the Academy Awards, where it would face the likes of The Tree of Life, The Girl With the Dragon Tattoo and Extremely Loud and Incredibly Close (which we'll get to in a second) and even The Ides of Freaking Golden Globe-Hustling March in the scramble for a Best Picture Oscar nod. Not to be a snob about it, either -- the numbers don't even add up! Let Steve Pond explain:

It'll take about 60 first-place votes (actually, closer to 50) to get through the first round. Even if it does that, it'll need about 250 votes to get a nomination -- and with a new system that severely limits the opportunities to move up if you don't have the votes right away, those 250 votes are going to have to come from the #1 and occasionally #2 spots on the ballot. Even the people who like it don't like it that much, it's not gonna happen.

Thank you! Anyway, you will no doubt hear many more rumblings of this sort emanating from the awards conversation in the weeks to come, and they'll all dutifully echo the talking points found at places like The Carpetbagger ("In the coming weeks, as nominees for the Writers Guild and Producers Guild awards are announced, the volume of affection for Bridesmaids in Hollywood will be revealed..."), and culturally speaking, you'll think, "Huh! What if?" But logically speaking -- hell, mathematically speaking -- there is only one appropriate response, one you will find yourself repeating and repeating throughout the bleary-eyed days to come: Give me a fucking break.

Now that that's out of the way, what are we to make of the true impact of last week's Golden Globe Award nominations on this year's Oscar race? It's the ageless question, really, resulting in the equivalents of everything from ruminative chin-scratching to dismissive jerk-off motions. Honestly, as THR's Scott Feinberg and I discussed in his podcast this week, there's only so much you can slam the Hollywood Foreign Press Association. So what if they sold a table to recognized the team behind The Ides of March? The film is good! Why shouldn't it wind up back in the mix, however compromised we consider its HFPA loyalties?

Moreover, why shouldn't we read the continued wide-scale oversights of Extremely Loud and Incredibly Close -- an 0-fer among both the SAG Award and Golden Globe nominations -- as an indication of its stillbirth in the race? The campaign's defensiveness is clear from the inside out; after all, less than two weeks ago we had producer Scott Rudin blowing off the awards-bait speculation as irrelevant ("It's a movie, not a worm on the end of a hook," he told the NYT). Then two days ago, not long after ELAIC's less-than-optimal Academy screening ("[I] can't see it advancing much if that's the kind of reaction it's getting from members," one voter told Pond), along comes another NYT piece laying out just how ELAIC can backdoor its way into Best Picture contention with the minimum amount of time and votes. Never mind the intellectual dishonesty of it all; this the Oscars we're talking about, not the Nobel Prize for Economics. Just take a moment to breathe in the panic as The Girl With the Dragon Tattoo and War Horse launch into the holiday-movie consciousness while the ELAIC crew still fiddles with their fuse. I mean, it's almost Christmas, and we're still talking about Bridesmaids, for Christ's sake.

Meanwhile, Moneyball enjoyed a slight boost, with more love for Brad Pitt and Jonah Hill nudging it just over Pitt's other Best Picture hopeful The Tree of Life. Elsewhere, it also bore noting that no film since Braveheart has won a Best Picture Oscar without first earning a Best Ensemble nomination from the Screen Actors Guild. That's not especially good news for Hugo, which nevertheless retains all the signs of a sure Academy nominee. But with The Help collecting seven total acting nominations between SAG and the HFPA, a momentum shift is afoot. And I know what you're thinking, Team Bridesmaids -- "But what about our ensemble nomination?" What about it? You're drunk. Go pass out, already. You won't remember any of this in 2012, and I promise not to remind you. 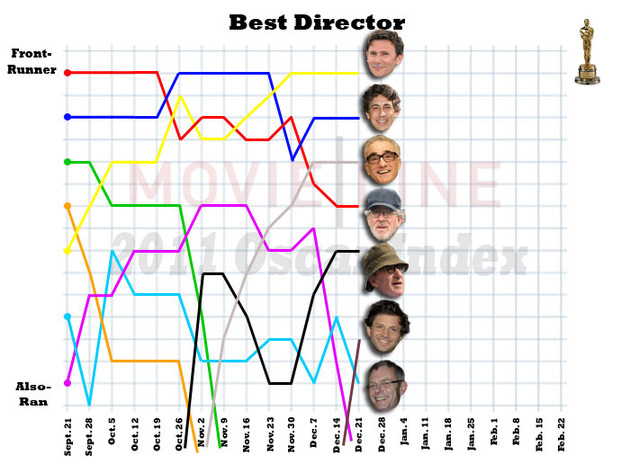 Congrats to Miller for his first Index appearance of 2011-12, which, despite Allen's redoubtable hold and the perennial lurking of Daldry and Fincher, I doubt will be the Moneyball filmmaker's last. Other than that, this "race" is about as allergic to interesting as it's been all year.