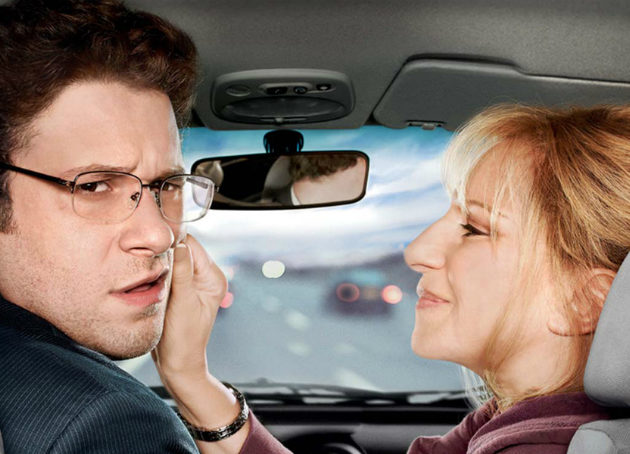 The Guilt Trip is a film as familiar as a mother’s voice, in more ways than one. Playing a frustrated son and his overbearing mother, Seth Rogen and Barbra Streisand elevate a formulaic script with their easygoing chemistry in this road-trip mom com. They produce as many laughs as they do cringes, but the film’s feel-good message is undermined by its ultimate purpose: As a vindication of the rights of Jewish mothers to annoy their children as much as they please.

Rogen plays Andy, a schlubby organic chemist who’s having trouble selling his invention, a nontoxic cleaning spray. The product, clumsily named Scieoclean, is a would-be bestseller, but Andy makes a worse salesman than Tiger Woods shilling monogamy. With the last of his savings he plans a last-ditch effort to drive across the country pitching Scieoclean to several big box stores.

Andy spends the day before his Jersey-to-Vegas trip with his well meaning but tirelessly chatty mother. Joyce (Streisand) is the kind of older widow who’s found a routine that’s nice and busy enough for her post-retirement years, but one that doesn’t include the emotional risks of dating. Over dinner, Joyce confesses to Andy that the love of her life was the boyfriend she had before meeting his father. A quick Google search shows that this long-lost beau also happens to be an advertising exec in San Francisco, a discovery that leads Andy to suggest Joyce join him on the eight-day trip. Of course, he casually leaves out the detail that their final destination has been moved to California, and that he hopes her ex-boyfriend will help him market his floundering product.

Joyce and Andy’s travels lead them through some very familiar road-trip movie situations. Their car breaks down during a freak snowstorm, one of them takes up the challenge to eat a big chunk of cow in a Texas steakhouse, and they wonder aloud about how long they’re supposed to respectfully marvel at the Grand Canyon. These are pleasant diversions, made enjoyable by Rogen’s gregariousness and Streisand’s twinkling, gamine eyes, but amount to very little.

Their journey finally gets into gear when Joyce stops her mindless nattering about sock sales at the Gap and confronts her son about his semi-hidden scorn for her. Again, the emotional beats are entirely predictable, but the rapport between the actors make them convincing. Rogen has more to work with: Andy’s a focused and ambitious adult who hasn’t yet realized that he has more growing up to do. He has a lot of hurt in his life, and it doesn’t help that Joyce’s idea of keeping in touch mostly consists of her (unknowingly) reminding him of his professional and romantic failures. Rogen also does the comedic heavy lifting here. His sarcastic one-liners are so spontaneously and perfectly delivered they have to have been improvised on the spot. (Streisand reportedly improvised some of her lines too, but she lacks her co-star’s effortless droll wit.)

Streisand has much less to do, but manages to add spark to her limited material. She sells Joyce’s phobia of dating with just a few gestures and skillfully mines the character’s contradictions. There’s a lovely moment halfway through the trip when a handsome stranger approaches to court her. Andy watches the scene unfold from some distance and gently teases her about it afterward. Flustered by the unexpected male attention, Joyce squeaks out an admonishing but embarrassed, “Don’t be disgusting,” even though she’d shown nothing but eagerness to discuss his girl troubles. The script needs more of those intimate, role-confusing moments to pull the character out of her shell and make her more than just “Andy’s mom.” That we have no idea what Joyce has done in the three decades since meeting Andy’s father and taking this trip is a particularly glaring omission.

Though Andy undergoes the bigger transformation, it’s safe to say it’s the Jewish mother — the archetype, not Joyce — who gets her revenge in the film. She fights dirty too, by appearing in the guise of a nice, attractive sexagenarian without a sadistic bone in her body. As the latest iteration of the Oedipal nightmare that is mothers who try to stuff their sons back into their wombs, Joyce is only an honorary member in that pantheon of disapproving control freaks. She isn’t a Talmudic scholar on the art of maternal passive aggression like Debbie Reynolds in Albert Brooks’ Mother or the sharp-eyed crones in Woody Allen films — she’s much too harmless and boring.

But if Joyce isn’t much of a scold, the film sure is. In fact, The Guilt Trip can feel like one long, occasionally funny, occasionally haranguing reminder to love your mother. It dings Andy pretty hard for being exasperated by his mother’s penny-pinching and cluelessness, and the basic lesson he learns from their week together is that his mother has all the right answers to everything. The film even lays the source of Joyce’s most wounding behavior, her inadvertent twists of the knife already lodged deep in Andy by life and failure, at his feet. If you’d only call, the film says, I’d know not to hurt you. Oy vey.