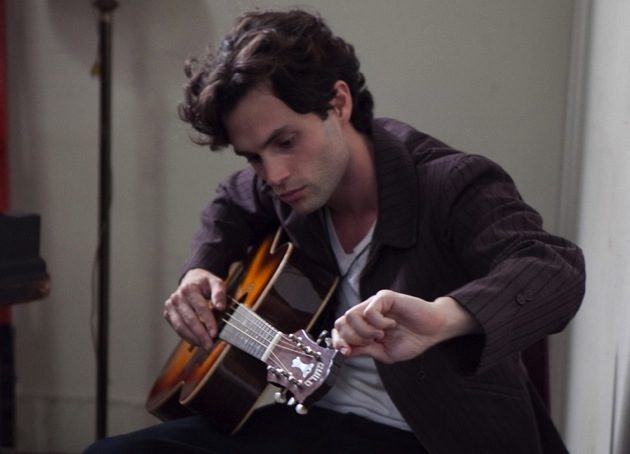 If you think of Penn Badgley in terms of Dan Humphrey, the character he played for five years on the CW Network's Gossip Girl, prepare to have your world rocked. The actor is about to make the transition from television to film look easy with a big performance in a small film:  Greetings From Tim Buckley, which opens in New York and Los Angeles on May 3 and in other select markets later that month. Badgley plays Jeff Buckley, the remarkably talented musical artist known for his album Grace and a much-adored interpretation of Leonard Cohen's "Hallelujah", who, like his singer/songwriter father in the movie's title, died much too young. Directed by Daniel Algrant (People I Know),  Greetings From Tim Buckley is about Jeff's attempts to get out from under the long shadow cast by his late dad (played by Ben Rosenfield).  Buckley pere died from a drug overdose at the age of 28, but, despite his short life, left behind a substantial, mostly critically acclaimed body of work, including nine studio albums. Jeff was working on his second album in Memphis, Tenn. when he drowned while swimming in the Wolf River there in 1997. He was 30.

The story is a rich one, but Badgley was at a distinct disadvantage from the get-go. Greetings From Tim Buckley did not have permission to use Jeff's music in the film — a second planned Buckley biopic, Mystery White Boy, will have that privilege — which meant that the actor had to convey the singer's immense talent and charisma without tapping into his songs. He more than rises to the occasion thanks to a tour-de-force a cappella performance at a record store that moviegoers surely will be talking about in the weeks to come.

I spoke to Badgley late last year after I saw Greetings From Tim Buckley at the Toronto Film Festival. With the movie premiering at the Tribeca Film Festival on Tuesday and opening commercially, it's a good time to hear what he has to say.  The actor spoke candidly about how he came to his interpretation of the singer, how falling in "real, true earth-shattering love" with actress Zoe Kravitz helped his performance, and why he says he's "done" with TV.

Movieline: What made you want this part so bad?

Penn Badgley:  Jeff was seductive and alluring and daunting and huge in my mind, but ,specifically, the story appealed to me.  The film obviously doesn't have a lot of his music in it, and there's so much about his father whom I didn’t know anything about. But it was very clear that the screenwriters had captured his voice. They had captured his essence and his soul and his art and where it all came from.  The quiet, organic snapshot of him felt very right.

The scene that everyone will be talking about is your a cappella interpretation of the Led Zeppelin III album in the record store.  I understand that was part of your audition tape.

Well, yeah, it was included among the audition scenes that they sent to everybody. And I remember reading it and thinking Jesus, this is certainly bizarre and specific. I couldn’t imagine that many people knew what to do with it. But, there was something about that scene that spoke to his voice and spoke to his qualities so beautifully. I knew that if I didn’t do it for my audition scene I would still have to do it later if I remained in the running for the role. So, I just knew: I've got nail this.

You certainly do in the movie.

It’s one of those performances that you really can’t rehearse. It has to be vulnerable and exposed and unabashed.  I did it in the audition the way I did it in the film because there’s really no other way to do it. And when I finished, I remember thinking, “Holy shit, I might have just gotten this thing.”

How many takes were required during filming?

We did three takes total. They were all different but all evoked the spirit of that scene. And there really was no way to prepare for it.  Thankfully, the thing that saved me is that I knew the material. I went through a Led Zeppelin phase as a teenager, and I was really familiar with that stuff. Honestly, if the scene had required me to sing something that I didn’t really know, I don’t know how I would have done it.

Buckley had a five-octave range. I'm not musically trained, but you seemed to be moving through the octaves without any trouble. Do you have a similar range?

I think I might.  I don’t know my actual range but it’s similar. I just happen to have a deeper voice. So, Jeff could go higher than I can.  But I can go lower than he could.

In terms of the speaking voice you use in the movie, you're interpreting Buckley, not mimicking him.

I  knew that I couldn’t mimic him, because Jeff had this beautiful, high, lilting speaking voice. If I had to do just three minutes of Jeff Buckley, I guess I could have tried to do more of an impersonation, but  I felt that if I had to augment my voice in every scene I wasn’t going to be able to be that free. So, I thought, okay, why is it important that he has a high speaking voice?  If he had a low voice, people would have said he had a beautiful, low, lilting voice. So, I chose to figure out what was it about him that made people respond the way they did and work with those qualities in a way that was totally honest with myself.

What did you end up deciding was essential about Buckley?

He was a quiet, ecstatic, gentle and, yet, full of rage.  He was also in some ways very immature. The way that he seemed to interact with people was infinitely endearing but, at the same time, on paper, it should have been almost annoying.  It’s like he was always on a tightrope as an artist and as a person. I think because of the talent that he clearly had, he believed in himself so much that he almost had this certain arrogance.  At the same time he was painfully, painfully self-conscious and self-aware. Everybody is full of contradictions but he was an extreme case of that. It's like all of those strange contortions of his voice and his body and his face were expressions of the tension between those contradictions. It was him acting out, and so we're telling part of the story through my body language and voice, too.  It was like adopting he body language of feral cat.

Is there a musical album in the cards for you? You've got the chops.

It’s something that I’ve been madly in love with and dreaming about for two decades, but until recently, I didn't really know any other musicians. What’s beautiful about this movie is that, because of it,  I now have a lot of friends who play.  In fact, almost all my friends in Brooklyn are musicians and they’ve been inviting me to play little opening sets for them – just unannounced  little gigs.  And I definitely am going to pursue it.  I’ve always been quietly writing and playing in private, and it’s like everything that I was experiencing before and during the shoot allowed me to finally realize some of my own music.  So, yeah, I think I will definitely be doing something soon.  I don’t know about an album.  I mean, the music industry is in a weird state. What I really want to do is play live and create an experience in a room that you can’t necessarily capture and play again.

The first time you and I talked,  you said that falling in love with Zoe Kravitz at the time you were playing Buckley helped you really put yourself out there for the part.  How so?

At that time I was falling madly in love in a way that was changing me and opening me up.  And it was an integral part of playing Jeff. Technically, I could probably play guitar and sing better now because I have a year of consistent experience under my belt, but, at the time, I was kind of going through what Jeff was going through emotionally in the movie in the sense that the worlds of music and love and women and art were opening up to me. Honestly I needed it.  It was like this cosmic intervention where, if you're going to play somebody like Jeff you've got to at least be in love, you know?

The universe answered you.

Yeah, very much.  And being in love, real, true, earth-shattering love – even though it sounds hyperbolic I really was going through it — helped me be as good as I could be.

I suspect this role will lead to more film offers for you.  After so many years in television, are you now concentrating on movie roles?

For me, this movie is a beautiful step forward. Gossip Girl has given me everything that I have now. It gave me the opportunity to live in New York and to be in a position to get this role. It also put me in New York City so I could meet Zoe.  And it’s put me in a place where I haven’t had to do a bunch of other shit just to make money.  I'm super grateful for it, but this movie has come at the right time to take a step forward. I have been working in television for 13 years now, and you know, I'm just done with it. I have nothing against television, but I'm done.