REVIEW: Arnold Schwarzenegger Is Back In Dumb, Fun 'Last Stand' 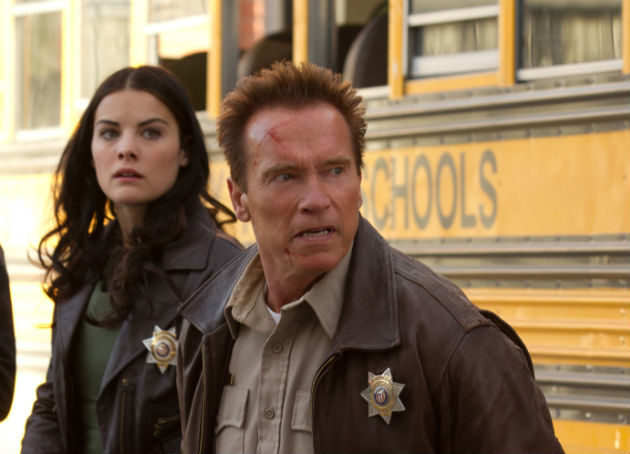 “Welcome to Sommerton!” growls Arnold Schwarzenegger in his comeback flick, the ultra-bloody shoot-em-up The Last Stand. As Arnie catchphrases go, it's no “Hasta la vista, baby” — hell, it's not even a “Consider this a divorce” — but it's been 10 years since the Terminator starred in a movie and we'll take what we can get.

In this violent modern Western, Arnold plays Sheriff Ray Owens, guardian of Sommerton Junction, a hamlet on the Arizona border that's just a corn field away from Mexico. (Casting a bodybuilder with an impenetrable Austrian accent as a small-town American sheriff seems like a stretch until you remember that in real life, Californian voters cast one as their governor.) As in every Schwarzenegger flick, the residents of Sommerton never quite seem to notice that Sheriff Ray is big, strong and scary. The mayor treats him like he's Paul Blart: Mall Cop and the waitress at the diner on Main Street pesters him at 4 am to ask why the milk man is late.

But Ray takes these insults in stride: he's old, and he doesn't care who knows it. As did Sylvester Stallone's Barney Ross in the first Expendables, he tempers expectations by being the first to declare — repeatedly — that his deltoids have seen better days, like he's a King Lear who's forced to kill. The world weariness plays better here, as unlike Stallone's paid mercenary, Sheriff Ray, an ex-LAPD narcotics officer, just wants to keep the peace. When he sighs, “I've seen enough blood and death,” you believe him.

The set-up of Andrew Knauer's screenplay is classically simple: Three hundred and fifty miles away in Las Vegas, evil drug baron Gabriel Cortez (Eduardo Noriega of the Spanish twister Abre los Ojos) has escaped FBI custody with the help of a giant magnet (seriously) and is zooming toward the Mexican border. Cortez has lined the freeways with hired goons who've out-thought the Feds' panicked responses — the way he bursts through a police blockade in a speeding car is worth the price of admission — and now the only thing standing between North America's most dangerous cartel boss and his freedom is 250 lbs of Austrian, er Arizonan, muscle who has just hours to prepare for a bloody showdown on his town's literal Main Street.

South Korean director Kim Jee-woon has toyed with wild west conventions before. His slapstick 2008 film The Good, The Bad and the Weird was like a Clint Eastwood movie with a pounding soju hangover. The first third of The Last Stand is a bit of a slog — Arnold still can't act, but who cares? — and Kim doesn't spring to life until people start dying. His favorite kill? The headshot. For a film that doesn't star Tobin Bell, the screen is drenched in brain goo (too bad Stallone already squatted on the title Bullet to the Head) and when the plot starts running out of craniums Kim summons a pick-up truck full of watermelons and takes aim.

The Last Stand is an ill-timed love letter to weaponry. It's so trigger-happy that a man gets shot in mid-air when he's already falling to his death. There's a gun so big that it's simply referred to as “The Gun,” another that's affectionately called a “little bitch,” and when a gun's not in reach, there's a flare gun handy. It makes sense that Kim might be pro-militia; unlike the current members of the NRA, Kim's actually lived through a coup d'etat in his home country. Still, there's something queasy about a film that celebrates local nut Johnny Knoxville's illegal gun stash — and as someone who hopes Barack Obama's gun control bill gets passed, I felt guilty cheering when a bonnet-wearing granny whips out her personal shotgun and gets in on the action.

Besides Knoxville, who doesn't get enough screen time to be annoying, Schwarzenegger teams up with fellow cops Luis Guzman and Jaimie Alexander (Lady Sif of Thor), while Cortez's crew is headed by a hilariously accented Peter Stormare, who sounds as convincing as a Southern trucker as Guzman would mimicking Queen Elizabeth. But Arnold's real co-star in The Last Stand isn't one of the humans hanging around in the margins. It's Cortez's escape car: a $120K Corvette with a fictionalized horsepower of 1000, 30 percent mightier than the fastest Lamborghini on the market. The Corvette's curves are so seductive that you'd rather gawk at the dashboard than sexy hostage Genesis Rodriguez, who's strapped into the passenger seat, and when it blitzes by a donut-eating cop (the flick traffics cheerfully in cliches), he mistakes it for a plane. Kim doesn't just sit back and watch it roar — he gives the Corvette a true star moment with an inventive car chase set in a disorienting corn field. Fast and the Furious 6 (or as I prefer, Fa6t 6ix): your move.

A machine himself, Schwarzenegger is using The Last Stand to scrape the rust off his reputation. It's a smart choice: it's just bold enough, brutal enough, and dumb enough to feel like a return to form. In 2002, the year before Arnold took office, Jason Bourne kick-started ten years of soul-searching, shaky cam hijinks that annoyed action fans who like to appreciate blood squibs and stunts. But in The Expendables 2, Jack Reacher, and now this, we're seeing a cinematic return to men who crack quips, fight with their fists, and swagger around without having to carry the weight on the world on their over-developed shoulders. Is it a coincidence that classic action is making its comeback at the same time Schwarzenegger is making his own? Hey, he warned us he'd be back.