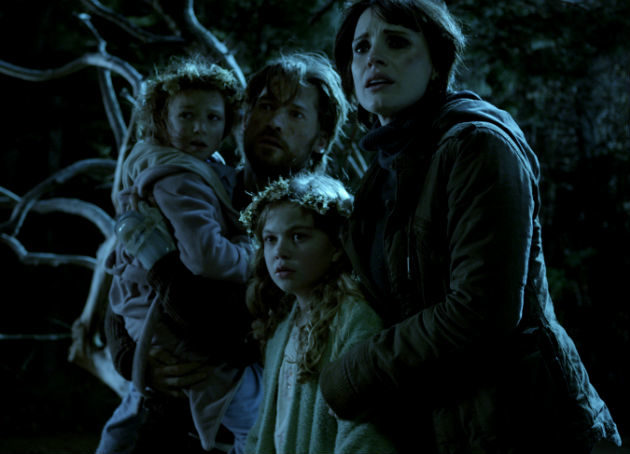 In Tree of Life, Jessica Chastain played a mother who could float. In Mama, she's attacked by one. Chastain shot this dignified little thriller in fall 2011 during the stretch when literally every arthouse theater played at least two of her pictures—between Tree, Coriolanus, The Help, Take Shelter, Texas Killing Fields and The Debt, she was indie cinema's inescapable new queen. Universal intended to release the Guillermo del Toro-produced Mama last October, but shelved it until the week after Chastain was nominated for an Oscar for Zero Dark Thirty. Is this her reputation-besmirching Norbit? Pshaw — for my money, it's her best performance yet.

Mama starts with a child's hand scrawling “Once upon a time,” words that send us all the way back to, uh, the financial collapse of 2008. A Wall Street bigshot (Nikolaj Coster-Waldau) has a nervous breakdown: He shoots his co-workers, shoots his wife, and kidnaps his two girls, ages 3 and 1, with the intent of hiding out and shooting them, too. (Alas, murder-suicide is today's version of parents in the Brothers Grimm casting out their children to survive in the forest.) The place he chooses to pull the trigger is a cabin in the woods that belongs to "Mama," a ghost who doesn't take kindly to deadly dads. Side note: Why is Hollywood newly obsessed with monsters who are painfully thin and flexible? It's as if our entire generation grew up having nightmares about a double-jointed Karen Carpenter.

As the opening credits roll, kiddie crayon sketches show us what happened next: The scared blonde tykes cling to their new ghost mommy and revert to crawling on all fours and eating rats. It's a feral child fairy tale! Cut to the present where we first meet rocker girl Annabel (Chastain) beaming at an EPT test, overjoyed that her boyfriend (Coster-Waldau again) hasn't gotten her pregnant. Alas, her guy turns out to be the girls' uncle, and his detectives have finally found Mama's lair. Surprise! Annabel's about to be the adopted mother of two crab-walking nightmares, and she really doesn't want to meet their babysitter.

Every beat in Mama is familiar, down to the exact moment you need to close your eyes to dodge a jump-scare, and there's a goofy child psychiatrist (Daniel Kash) whose actions make about as much sense as Claire Danes in Homeland. But damned if Mama doesn't transcend its nonsense. As in Paranormal Activity 3, the girls — now 6 and 8, but psychologically closer to wildcats in captivity — spend a lot of time in their bedroom playing tug-of-war with their spooky spectral caretaker and humming creepy hymns. Young actresses Isabelle Nelisse and Megan Charpentier are excellent, with Nelisse frighteningly primal, and Charpentier as her guilt-stricken and watchful older sister. The best call in the script is the slow wedge that's driven between the girls, the real world, and the world only they believe in. The kids are scary but they don't thrill to see Chastain scream. Instead, their loyalty is torn between the only mother they've ever known and, you know, the one who doesn't look like an anorexic hellbeast.

One standout chase sequence shows us Mama's back story in a retro filmstrip style that looks like one of D.W. Griffith's nightmares. But Mama's smartest choice is the decision by helmer Andres Muschietti (who also co-wrote the script with Barbara Muschietti and Neil Cross) to cast Chastain for insta-class. Chastain has carved out a career in shockingly fast time, but she's been oddly ill-used by her directors, who tend to see her as a figurehead, not a woman. She's been shoehorned into archetypes: The fragile doll, the vision of womanly perfection, the sexless drone. It takes this slight but ambitious horror flick to let her be flesh-and-blood fun. Her Annabel is a tough, short-haired dame who's inked with tattoos under her Misfits t-shirts. She plays guitar in a '90s-esque girl band — god, I wish we had more of those today — and her cellphone voicemail barks: “This is Annabel. Leave a message at the beep. Fuck you — beep.”

As she warms, slowly, to the beast-children, Chastain gets to play an arc, not an archetype, and Mama becomes an honest-to-god film instead of a quickie horror cash-in or a bone-dry drama that relies on Chastain to do all the heavy lifting. Kathryn Bigelow, take note: Surround Chastain with an actual movie, and you might get a Oscar nod the next go-round.