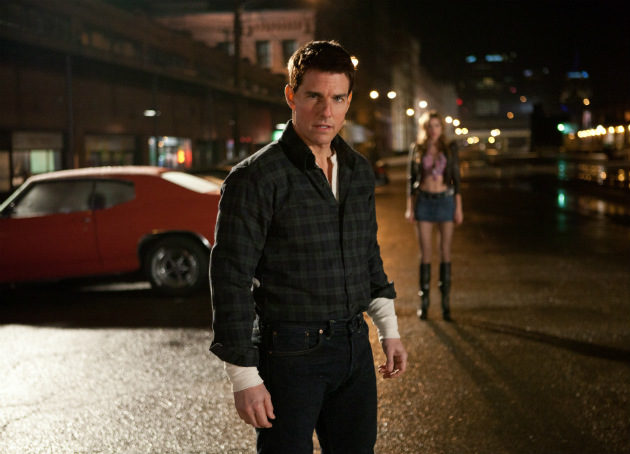 Jack Reacher, protagonist of Lee Child's brilliant series of airport pulp, has sold nearly 40 million books. He's also blonde, ugly, 6'5” and 250 lbs, which means the difference between the Reacher that fans love and Tom Cruise, who plays him in his long-awaited film debut, is literally sizable: Ten inches and 90 lbs, to be exact, and a whole lot of handsome. Child's Jack Reacher is homeless, and for the well-coiffed Cruise, playing a guy who shops as Goodwill is as much of a stretch as hoping no one will notice his larger-than-life ex-military cop is barely taller than his co-star Rosamund Pike. (Which in real life, he's not — Pike towers over him by two inches.)

In the original novel, One Shot, Reacher spends half of the book pacing the surprisingly mean streets of a sleepy Midwestern city trying to unravel a shocking sniper attack that left five civilians dead. The flick opens with the crime — watching through crosshairs as the killer selects his targets is agonizingly tense — and in eight minutes, it's solved and the murderer is in prison. Unlike in the book, McQuarrie shows us something the police don't know: the face of the killer is different than the man behind bars. Yet not only is the evidence against the accused so perfect that his lawyer (Pike) merely hopes to get his sentence reduced to life in prison, here comes Jack Reacher, the accused's old enemy, rolling into town on a Greyhound bus to make sure he gets the death penalty.

Reacher is a brute with an odd moral code. When someone has what he wants — be it information he needs or a sports car he wants to borrow — he'll twist their arms (literally) until it's his. And he's not just mean to men: he'll leave women alone in dark alleys, and he'll call a barely legal bimbo a “slut.” But if someone hurts that slut — at least, someone besides him — he turns into a heat-seeking missile of muscles, a jackal who won't stop running until he catches his prey.

So bringing Jack Reacher to the screen means Cruise has a lot to measure up to, but instead of swinging for the fences, he bunts. His Reacher is like every other character Cruise has ever played: Tough, cocky, and the smartest guy in the room. It's the Tom Cruise paradox; he's a great actor who's stopped acting. He can't vanish into a role, but then he doesn't have to. Audiences show up to his films just to see his latest ass-kicking adventure, which makes Cruise the inverse James Bond — instead of different actors playing the same character, he's one actor who plays the same character under a dozen different names. You could pretend his entire last decade onscreen is just Ethan Hunt going deep undercover to save the day.

Luckily for director Christopher McQuarrie, Jack Reacher is also tough, cocky, and the smartest guy in the room. A former Army policeman and genius investigator, he's always three steps ahead of his rivals and he loves making sure they know it. He's so physically gifted that he makes his attackers look like the Three Stooges, and so mercilessly aggressive that he aims straight for his enemies' eyes, knees and groins. Even hanging up a payphone, his elbow snaps like he'd rather be breaking someone's neck. And yet, even this film's last minute name change from One Shot to Jack Reacher does nothing to convince us that we're watching a fictional Army vet named Jack Reacher — we're watching Tom Cruise, and for fans of his, that's enough. For fans of Child's books, however, the pleasures are more complicated.

With, oh, 100 of the book's 376 pages occupied by Reacher's inward deductive reasoning, McQuarrie faced the risk of a flick that was all voiceover. Instead, he flips the script; Cruise silently pads around looking smart and we're meant to see his the gears in his head grinding. The film's more fun when he finally opens his mouth to insult his ever-growing list of enemies, including a sour DA (Richard Jenkins), a cop who accuses him of murder (David Oyelowo), some rednecks (Alexia Fast and Josh Helman), a couple of vicious hitmen (Michael Raymond-James and Jai Courtney, co-star of the next Die Hard) and the big boss, a four-fingered Gulag survivor named The Zec (Werner Herzog). Herzog is perfect for the role: he's made a career of grimly muttering “death” and “murder.” He's only in the movie for ten minutes — far too short — but he has one stand-out scene where he orders an underling to bite off his own thumb or get shot in the head, an at-any-cost survival instinct that Herzog's been hunting for in his own films for decades.

Alas, the weakness of the film is the weakness of the book. The Zec's evil plan is both byzantinely complicated and pifflingly mundane. We already know the face of the killer. What we don't know is why, and the big reveal is more of a “Huh?” McQuarrie, the writer of The Usual Suspects who also adapted One Shot himself, is still finding his legs as a director. Jack Reacher has the bright and empty look of television and is a bit unsteady as it wavers between action and laughs. But the flick is great entertainment as Reacher headbutts his way to the Zec, dutifully and casually giving nods to devotees of the books, even casting Lee Child in a cameo as a police officer who returns to Reacher the only thing he owns: a portable toothbrush. (Explains Reacher in the book Bad Luck and Trouble, “I carry a spare shirt, pretty soon I'm carrying spare pants. Then I'd need a suitcase. Next thing I know, I've got a house and a car and a savings plan and I'm filling out all kinds of forms.”)

Beat by beat, Jack Reacher is just like Child's paperbacks in the best possible way: it's fast, fun, and smarter than it looks. Will it give Tom Cruise another hit action franchise? It deserves to. Hollywood has 17 other Jack Reacher books to pick from, any one of which would fit seamlessly into the Cruise canon. But for Child, the real question is, how many hit films will it take for Cruise fans to remember Jack Reacher's name?