These Iron Man 3 posters are a lot more interesting to look at than that bizarre Oscars telecast bit with Robert Downey Jr. and his fellow Avengers cast members. They make more sense, too.. In addition to the Gangnam Style poster of the Mandarin I wrote about last week, there's now a poster of Pepper Pots (Gwyneth Paltrow) holding a cracked Iron Man face plate as well as one featuring Guy Pearce and that artist's rendering of Downey falling from the sky.  For the coup de grace, there's a cool text-free picture of the film's star suited up on the cover of Empire magazine.

For my money, the pre-Oscars red-carpet pageantry is the best part of Hollywood's biggest night. The envelopes haven't been opened yet, so everyone's still a potential winner. And they look like winners, too. Here's just a small sample of the celebrities who made the scene on Sunday. All photos by Getty Images.

Dave Grohl and his Foo Fighters rocked Sundance Friday night with a star-studded group of rockers that included Stevie Nicks, John Fogerty, Rick Springfield, Cheap Trick's Rick Nielsen and former Nirvana bassist Krist Novoselic. Here are the opening moments of the show with Queens of the Stone Age member Alain Johannes. Looks like Getty Images may have had to observe the three-song rule in which concert photographers are permitted to shoot the first three songs of a show then take a hike. But if we get more shots of the band performing with Springfield, Nicks and the others, we'll add them.

Jennifer Lawrence, Josh Hutcherson, and Liam Hemsworth are back hungering for more action in Catching Fire, the Francis Lawrence-directed sequel to The Hunger Games which will see Katniss & Co. return to the arena for an all-new battle royale. See the first images from the November 22, 2013 release, including a look at newcomer Sam Claflin as the charismatic fellow Games victor Finnick Odair.

PHOTOS: See Who Sizzled At The Golden Globes 2013 Awards!

Stars hit the 2013 Golden Globes red carpet and we've got the pics! Who wore it best? Who worked that canned banter the hardest? Devour these Golden Globes photos!

Quvenzhané Wallis was savoring a chocolate-covered strawberry when we asked her to name her favorite part of awards season. "All of it," said the precocious star of Beasts of the Southern Wild as she took in the starry crowd at the National Board of Review Awards dinner at Cipriani 42nd Street in New York on Tuesday night. Wallis, who received the Breakthrough Actress award was among a group of honorees that included Bradley Cooper (Best Actor), Ben Affleck (Special Achievement in Filmmaking for Argo), Leonardo DiCaprio (Best Supporting Actor), Kathryn Bigelow (Best Director) and Jessica Chastain (Best Actress)

Zero Dark Thirty also took Best Film honor and, despite the presence of nine-year-old Wallis in the room, Chastain's often-repeated line from the movie, "I'm the motherfucker that found this place, sir," — a reference to the compound where Osama bin Laden was hiding — was riffed on all night, with awards emcee Meredith Vieira declaring at the beginning of the ceremony that she was "the motherfucker" running the show. From there, the f-bomb was dropped freely and frequently by Chastain, Affleck, James Gandolfini and the refreshingly bawdy Vieira, who was one of the highlights of the night. After Daniel Craig joined James Bond franchise producer Barbara Broccoli onstage for a tribute to 007, Vieira told the crowd: "So James Bond is 50 and he still looks good. I'm 59 and I feel like Dead Pussy Galore."

Chastain got the night's highest compliment from Al Pacino, who worked with a then-unknown actress on Broadway in Salome in 2006. The Hoo-ah! King told the crowd that the red-headed beauty is the "incarnation of Bette Davis" and predicted she'd have a career as fruitful as Meryl Streep.

Bigelow also continued defending the depiction of torture — and its effectiveness in extracting information leading to the whereabouts of bin Laden — in Zero Dark Thirty, with a single koan-like sentence: "Depiction is not endorsement" that is bound to draw some blowback in and of itself.

What better way is there to dive back into the action game than taking your own personal tank for a weekend spin? Former California Governator Arnold Schwarzenegger did just that at Melody Ranch, cigar in hand, when he regaled press with tales of his Austrian Army days, casually demolished a Mercedes, and praised Korean director Kim Jee-Woon (I Saw The Devil), whose English-language debut actioner The Last Stand (in theaters January 18) marks Schwarzenegger's first lead role in a decade.

Okay, so Star Trek Into Darkness director J.J. Abrams is keeping us guessing about whether Benedict Cumberbatch — whom he's calling by the very generic name of John Harrison — will morph into one of the canon's most notorious villains, but here's a different opportunity to satisfy some of your curiosity and anticipation. Paramount has just released a cache of 10 photos from the film featuring many of the franchise's regulars — John Cho's Sulu is sadly missing, though — and some new faces, including Alice Eve as Dr. Carol Marcus, Kirk's future baby mama if Abrams & Co. adhere to the Star Trek canon. Look long and prosper.

Robert De Niro sounded just like his Philadelphia Eagles-loving character from Silver Linings Playbook, Pat Solitano Sr. when we asked him what he made of the more hectic-than-usual awards-season jockeying going on right now. "Gotta get in there and fight," said the stubbled actor, who was uncharacteristically approachable at the party that Dr. Mehmet Oz, director Barry Levinson and De Niro's Tribeca Productions partner Jane Rosenthal hosted for the actor and his director David O. Russell, who are both generating Oscar buzz.

While reports swirling that Massachusetts Democrats were considering drafting Ben Affleck to run for the seat that Sen. John Kerry will vacate if President Obama taps him to replace outgoing Secretary of State Hillary Clinton, the actor and Argo director actually met with Kerry when he traveled to Washington to testify on security issues relating to the Democratic Republic of the Congo. Here's a look at Affleck in action:

'Stand Up Guys' Premieres At MoMA 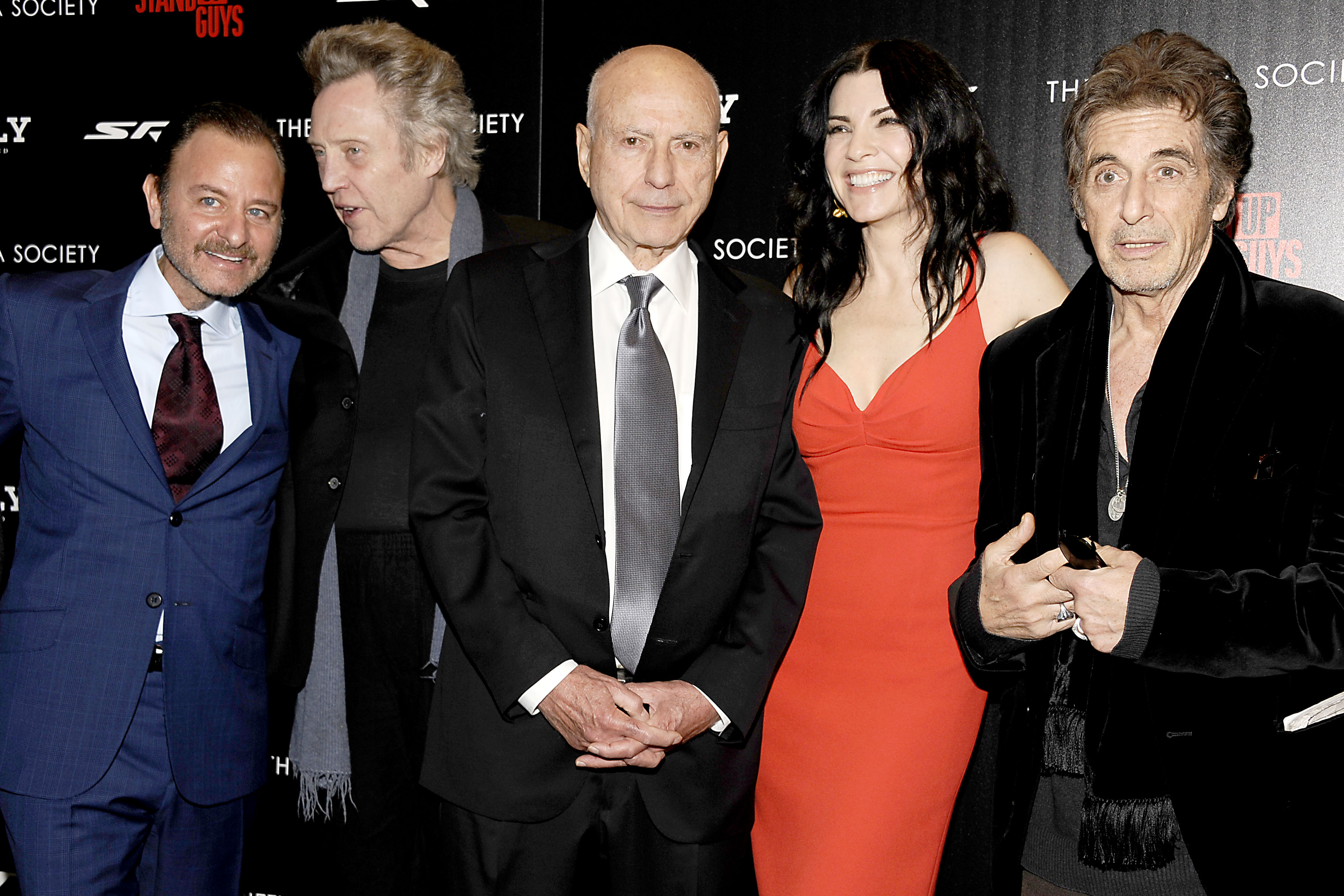 The Cinema Society hosted Fisher Stevens, Christopher Walken, Alan Arkin, Julianna Margulies, Al Pacino (pictured) for a New York premiere screening of Stand Up Guys over the weekend, also hosted by Chrysler & Bally at MoMA. Directed by Stevens the film centers on a pair of aging con men try to get the old gang back together for one last hurrah before one of the guys takes his last assignment — to kill his comrade. Other guests at the screening and after-party at the Plaza Hotel included Ben Stiller, Liev Schreiber, Sam Rockwell, Jeremy Piven, Matt Dillon, Mariska Hargitay, Trudie Styler, Ronnie Wood (Rolling Stones), Gina Gershon, Alan Cumming and more.

NYC Takes A Bite Out Of 'Breaking Dawn 2' 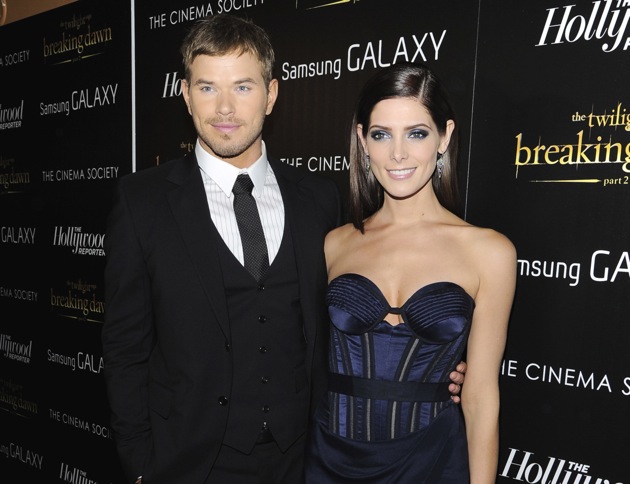 New York's Twilight Saga: Breaking Dawn Part 2 premiere may not have had the mega-splash that L.A.'s did earlier in the week, but fun was definitely to be had Thursday night where the final installment of the megawatt franchise had its official send-off. The Cinema Society, Hollywood Reporter and Samsung hosted the event at the Sunshine Theater in downtown Manhattan followed by a gothesque party at night-space Finale. Ashley Greene, Kellan Lutz, Dakota Fanning, Peter Facinelli, Elizabeth Reaser, Maggie Grace, Mackenzie Foy (cast), Lisa Howard (cast), Casey LaBow (cast),Howard & Beth Stern, Robert Buckley, Oliver Plat and more turned out for the screening, and guests took pics with Twilight-looking characters between Grey Goose cocktails at the party. Pictured here are Twilight stars Kellan Lutz and Ashley Greene. The film, of course, opens this weekend.