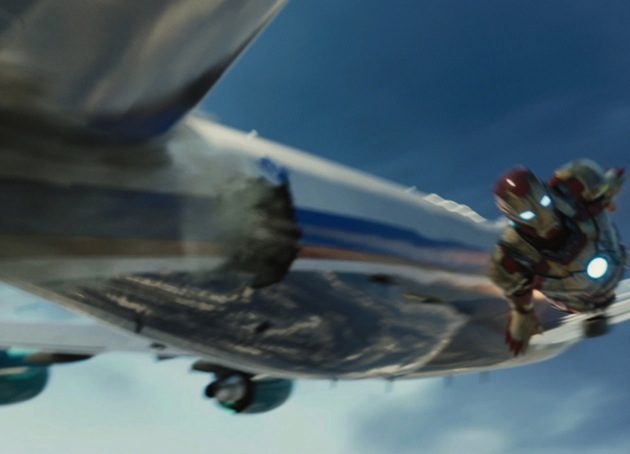 My palms get sweaty just watching this extended clip of what I hear is one of the most riveting sequences in Iron Man 3. Tony Stark (Robert Downey Jr.) has to suit up in a jiff and attempt to save 13 flailing, screaming people who've been sucked out of what looks like a crippled Air Force One. (If that's the case, it will be the first of two times the Presidential airliner gets blowed up this summer season.  The trailer for Roland Emmerich's White House Down shows the plane's wing being blown off.

But I digress. Although those two unlucky souls who hit the plane's fuselage on the way out should probably be dead as a result of the impact, Shellhead's valiant attempt to rescue everyone when Jarvis is telling him he can only handle four sure does make for some effective dramatic tension. How his first save, Heather, can hear Stark above her own (justified) screaming and the wind is beyond me, but I'm suspending disbelief.   The "I'll electrify your arm and you won't be able to open your hand" is a nice expository touch, too.  Check it out:

We can do this, Heather!