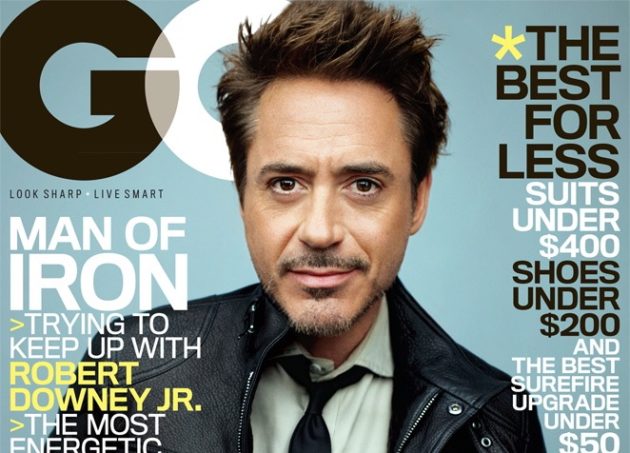 In March, I wrote about how Robert Downey Jr. is about as close to indispensable as you can get to Marvel Studios' lucrative superhero movie franchise — and now here's proof from the man himself. In a very entertaining profile of the Iron Man 3 star in the May issue of GQ, Downey confirms to writer Chris Heath that his payday on The Avengers was in the $50-million ballpark. The exchange between the actor and the writer is a thing of beauty:

"Whatever contract Downey signed when he agreed to appear in multiple movies as Iron Man allowed him a share of The Avengers’ payday far bigger than anyone could have anticipated. The Hollywood Reporter recently suggested that the true figure was around $50 million. It’s not the kind of thing most actors are prepared to talk about, but I ask Downey anyway.

Is that number about right?

Strategic cost! I bet that term was invented by the Nathan Thurm-like lawyer or public-relations consultant who came up with the term "collateral damage."  In other words, Downey is so valuable to Marvel that it's better to swallow hard and open up the Disney coffers rather than attempt to hardball him into accepting to a less-than-mindblowing figure. In other words, Disney is not going to risk losing him.

One of the Best

Why does that make me smile? It's partly because Downey is one of the great Hollywood comeback stories of all time, and I want to see that narrative arc continue trending upward. But I wouldn't care so much about his personal story if he weren't so damn compelling on screen. He knows it, too. Downey says he'll be "shocked" (italics, courtesy of GQ) if he doesn't win at least one Oscar during his career and comparing himself to the current generation actors, he tells the magazine:  “I’m probably one of the best. …But it’s not that big a deal. It’s not like this is the greatest swath or generation of actors that has ever come down the pike.”

I don't find that cocky. I find it authentic and true. Besides, as Downey also points out: “Nothing pleases me more than when somebody who was awe-inspired to be working with me realizes I’m just another schmuck that they’re bored of hanging out with on a set. I love that moment. I like it when that persistent illusion is smashed.”

Which 'Avengers' Cast Members Are Most Expendable?