Oscar Index: The Beginning of the End

The laurel-sniffing wonks at Movieline's Institute for the Advanced Study of Kudos Forensics went 27 for 34 predicting its regular, top six categories, which means that the Academy basically tossed in a "surprise" every fifth nomination or so -- though specialists at the MIASKF technically refuse to classify anything that was on last week's charts as a "surprise." So basically, if it's not all two nominations for The Daldry, then you probably should have seen it coming.

Which you did. As such, we resume the Sisyphean torment of our Oscar-addled eternities, pushing boulders that look and feel suspiciously like crystal balls up hills that look and feel vaguely like the bones of 84 years' worth of snubs. What does it all mean? To the Index! 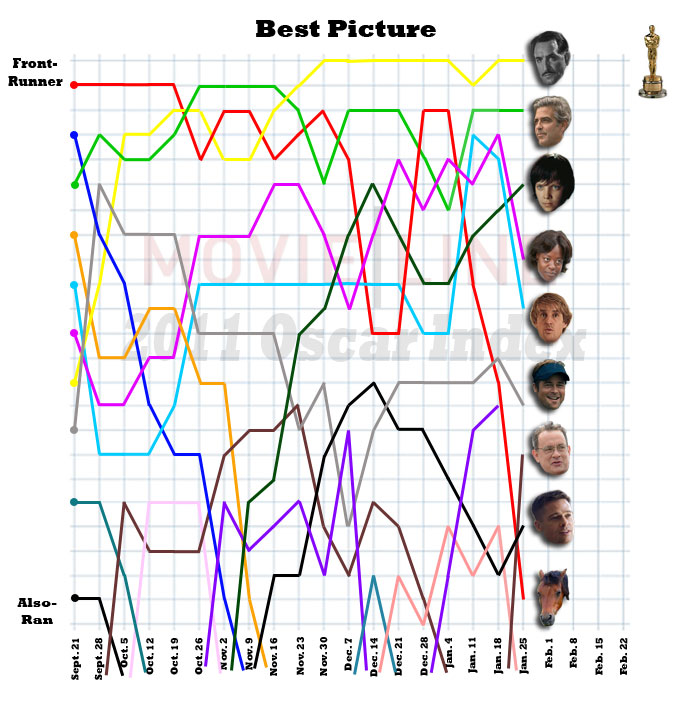 My favorite parts of nomination morning -- apart from the Lucasfilm plant who yelped, "Red Tails! Gotta be Red Tails" as Al Roker informally polled Today Show tourists about their Best Picture predictions -- were the peals of ecstasy that greeted The Daldry's announcement among the year's nine Picture nominees. It sounded like a dog clamping down on a chew toy made of publicists. Other nominations elicited vaguely similar reactions, but that was The Reaction, as if to underscore just how desperately all the parties of all the films involved had chased this singular recognition, and how favorably the Academy regards its most dogged pursers.

That's nothing new, of course. But for a film that has both critics and audiences on record as utterly disinterested (at best) to find 5 percent of the voting body -- around 270 people or so -- necessary to call it the Best Picture of 2011? That's just fundamentally fucked up. It literally doesn't make sense. It's one thing to look back and deduce how a film like, say, Crash actually wins Best Picture (e.g. through vote splitting among other nominees). It's another thing to look at this year's nine nominees -- loaded with the range of critical and commercial (to say nothing of self-referential) successes we've been accustomed to forecasting as the Academy's favorites for generations now -- and comprehend the basic qualifications of this group to recommend anything more than what this producer or that studio commanded them to acknowledge.

Again: So what, right? C'est la Oscar! Indeed, anyone who's been doing this a while is accustomed to being vexed, perplexed, bemused, confused, shocked, rocked and baffled. But I'm not only not used to battling the undertow of cynicism so early in the season, I'm also not used to the Academy so obviously stirring such malevolence in audiences. Forget about the press: We're just as insular and aloof and susceptible to influence as the Academy is. I'm thinking of ordinary viewers now -- people who, for better or worse, look to the Academy as tastemakers and who now have a squealing clique of flacks to thank for steering them and their money toward shameless, reconstituted Oscar bait like The Daldry. The ordinary viewer doesn't know that this film wasn't made for him or her, but rather for 5 percent of an audience of 6,000 "industry professionals" sought to anoint it as "Oscar-nominated." The ordinary viewer may never learn more about such provocative, sincere brilliance as Melancholia or Take Shelter, or the disgracefully buried Margaret, or the delicate jewel that is Bill Cunningham New York (which the Documentary Branch, in all its lobotomized glory, naturally snubbed), all because they couldn't compete with The Daldry's more moneyed, seasonal "greatness." The ordinary viewer doesn't notice the handiwork of Scott Rudin's cabal of mercenary Oscar ninjas, star-flinging sharpshooters laboring on The Daldry's behalf. But God willing, the ordinary viewer heard that sound in the back of the Samuel Goldwyn Theater on Tuesday morning and recognized its quivering evil as the alarm it was.

Apart from that? Congrats, to the Tree of Life team, I guess? And don't count out The Descendants, or something. Whatever: Everyone's going to kissing Harvey Weinstein's ring again when they lose to the recent PGA Award-winner The Artist, so... yeah. At least we have the Super Bowl to look forward to. 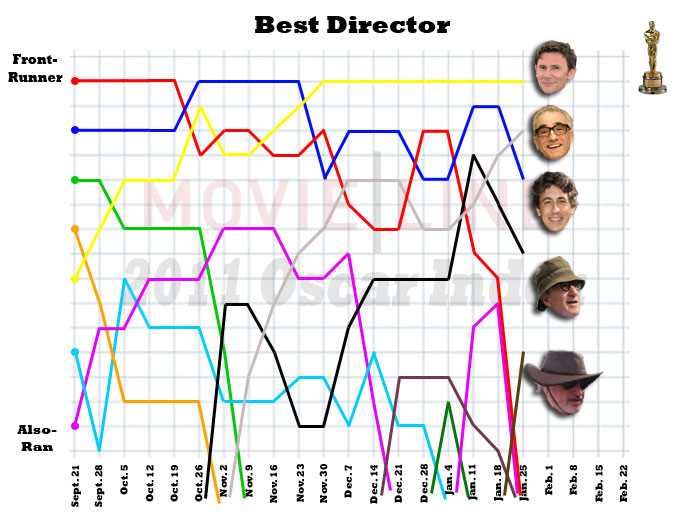 Scorsese leapfrogged Payne thanks to 11 nominations for Hugo -- and he may not be done there, depending on how warmly sad Academy lifers receive a front-runner whose name their president, Tom Sherak, couldn't be bothered to pronounce correctly Tuesday morning. Though Sherak screwed up "Score-say-zee"'s name, too, so who knows? "Malick" rolls off the tongue, no? Let's surprise him and find out. 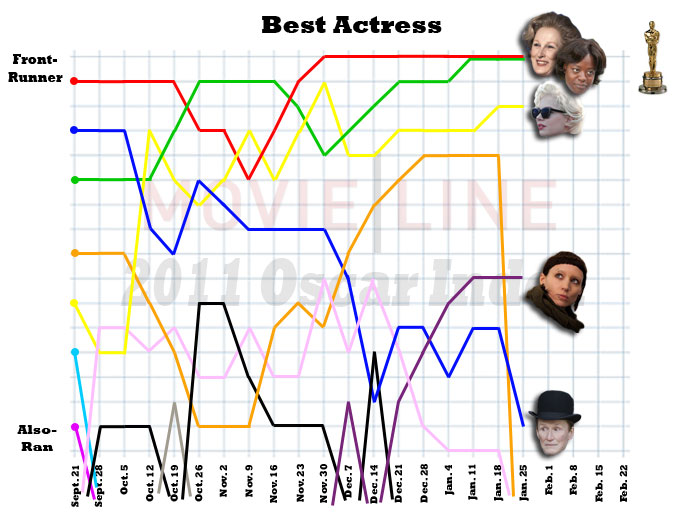 Poor Tilda Swinton, another casualty of the Academy's 2012 shocking kamikaze quest for mediocrity. Glenn Close evidently tends to bring that out in the actors' branch. Who knew? We'll always have Rooney, I suppose. Anyway, when I or anyone else have a little clearer read on who's where in the top two, the Index will reflect it. But right now it's basically a bunch of Oscar pundits shrugging and staggering out of happy hours in New York and L.A., hiccuping deep revelations like, "Awwww, man, they don't make Best Actresses like Halle Berry anymore, those were the days," and "I wonder if chairs at the Kodak Theater talk to each other... What would they [PUUUUKKEEEE]...", etc. etc. 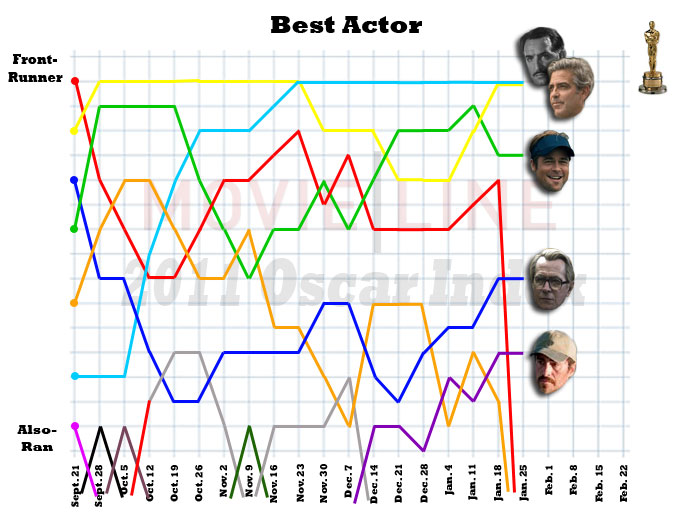 See, this is what I'm talking about: How does a group with enough class, taste and adventurousness to nominate Demián Bichir (over power hitters like Leonardo DiCaprio and Michael Fassbender, no less) also manage to shove a movie with a grating adolescent ex-Jeopardy!-winner leading man into Best Picture? Does not compute. 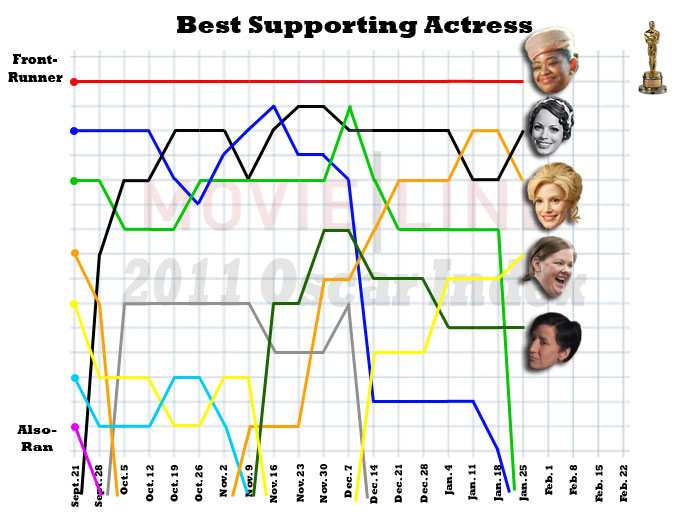 Hey, look: McTeer bumped off Woodley... annnnnnd it's still over. 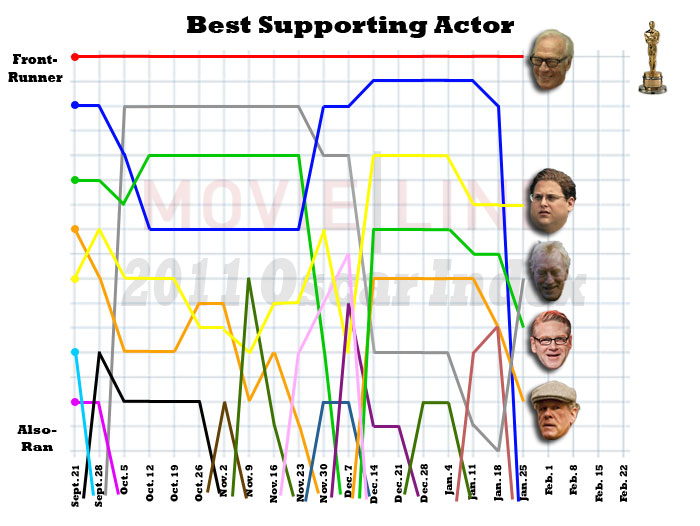 What can I say that Albert Brooks and Patton Oswalt haven't already tweeted to profound effect? This was not necessarily the category to be good so much as the category to be old. Speaking of which: Watch it, Plummer! Uggie Karma is not stuff you want to mess with.