Oscar Index: Left Out in the Gold

Smack in the middle of a two-week frame yielding two awards shows and a pair of nomination announcements that will culminate in this year's Oscar nods, the researchers at Movieline's Institute for the Advanced Study of Kudos Forensics have gained minimal insight into where the Academy may take the 2011-12 awards race in next Tuesday's final nominations. Or maybe they're all just sleeping. It's been that kind of year. Let's check their work in this week's Oscar Index. 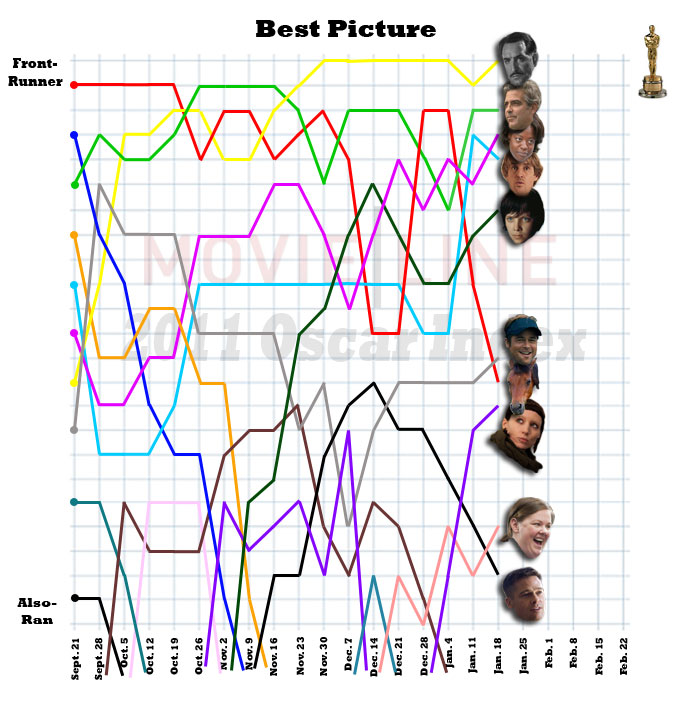 Regardless of their volume and putative weight, let's try an experiment: Let's not belabor the developments of the last week. Let's look past the all-star rosters and scattered surprises at the Critics Choice Movie Awards, Golden Globe Awards and among this week's BAFTA Award nominations, and let's forget how real I was telling you it all began to feel a week ago. Let's instead make quick work of key points about a race that is fundamentally down to two films vying for a Best Picture Oscar and maybe one or two others vying for the privilege of being considered alongside them. Academy nomination ballots are being counted as we speak; by this time next week we'll be talking not about what should or shouldn't be considered but rather about what a film with 11 nominations has going for it over a film with nine nominations. And all this bullshit about heat meters and gold derbies and even Oscar Indices will tumble through the cracks of new white noise telling how imperfect the whole system is, and what winning has to do with justice, and why do we care, and so on and so forth until the last for-your-consideration ad is sold and the last fleck of vomit is scrubbed from the leather banquettes that got the very worst of the Oscar-night after-after-after-after parties.

Let's concede that this is the part of the race where we all forgo our last remaining illusions of pure aesthetic combat, turning instead to the customary sight of fine-tuned cogs endeavoring to spin faster and faster still -- The Weinstein Company with its Artist, Fox Searchlight with its Descendants -- coaxing the parts around them into specialized lurches, as affecting as interchangeable porcelain ballerinas and lilting lullabies set into action by two greasy, handwound parts. Can The Help move any faster than it has all season, with its phenomenal box-office days behind it and actresses setting the pace of their own categories? Can Hugo survive the ever-escalating altitude of its nostalgia? Can Midnight in Paris pivot successfully out of the nostalgia trap, and if so, will a complacent Academy votership simply shy away, thinking, "Oh, too bad, this one's broken"? Can Moneyball or Dragon Tattoo, with all their sinewy, contemporary fierceness, fly low and slow enough to ever be seen by the birdwatchers otherwise known as AMPAS? Can Bridesmaids find the groundswell it will require to even crack the Best Picture class, let alone compete within it?

Let's then concede that our individual answers are all that's left of a process that only two weeks ago teased us with the prospect of intrigue, and that when the Academy reflects our old intrigues back to us, we will betray them as we always do with new intrigues are no one else's (e.g. "This is more easy emotional default old-fart consensus thinking...", "The Adventures Of Tintin might seem a surprise over favored Rango, but the latter is probably too American for the foreign group...") And then let's keep it going for another month of posturing on all sides, guided by the same inexorable pieces at the heart of the same inexhaustible machine.

Anyway, this is as good a read as I can get on the situation headed into Nominee Tuesday, which gives you an indication of how ridiculous this whole folly is from week to week. I say we'll get eight Best Picture nods total, in the order listed above. Wagering on this prediction would be a bad idea -- unless you win, I guess, in which case you'd better cut your old pal STV in. 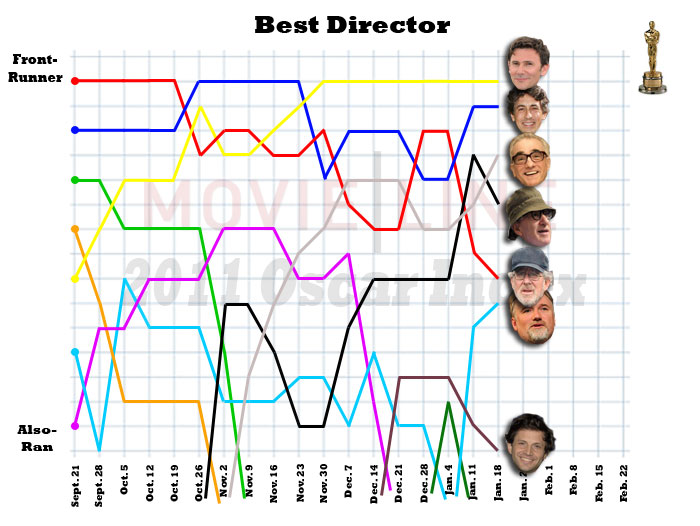 Scorsese has been a nomination lock for weeks now, but claiming Best Director at the Globes was one of the rarer glints of HFPA influence on the Oscar race. On the one hand, Harvey Weinstein was able to wrangle an Oscar for a relatively unknown Tom Hooper last year over Fincher et. al., so doing the same for Hazanavicius shouldn't be perceived as too difficult. On the other hand, Scott Feinberg notes the Academy's historical Best Director quirk:

History tells us that Academy members rarely back different films for best picture and best director, respectively, which would benefit The Artist, which seems to be the more beloved film. But we also know that "splits" do sometimes happen, and the example set by the HFPA of "spreading love all around" might appeal to some Academy members who love The Artist but would rather back a director with a long track record than someone who now has only one American feature film under his belt.

Obviously Payne shouldn't be ignored in this context, either, but Scorsese gets the week's big bump. Fincher is coming around behind the scenes as well; Sony pushed hard last week as resistance to the Dragon Tattoo-slump non-story built around the Academy. We'll see what that's worth against the last ounces of Spielberg's pre-nomination muscle. 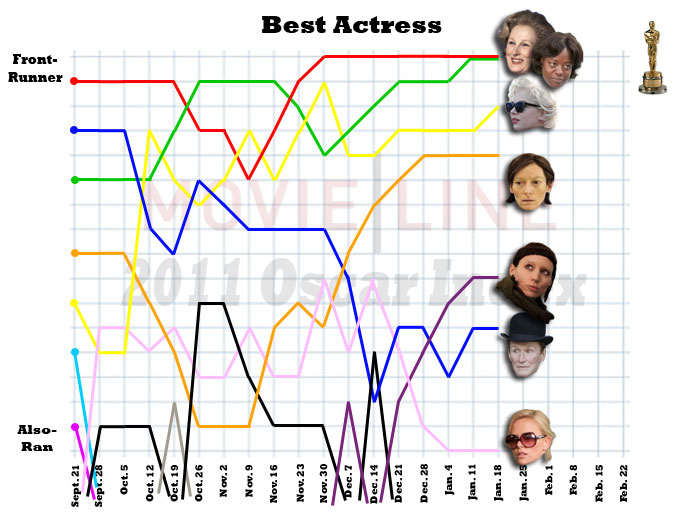 The Leading 5:
1. (tie) Meryl Streep, The Iron Lady
1. (tie) Viola Davis, The Help
3. Michelle Williams, My Week With Marilyn
4. Tilda Swinton, We Need to Talk About Kevin
5. Rooney Mara, The Girl With the Dragon Tattoo

Not even the boldest pundit would yet dare to choose a Best Actress favorite after the week we just had, with winner Davis dazzling the Critics Choice crowd and Streep giving it her own best acceptance-speech shot at the Golden Globes. And what of Michelle Williams, whose provocative GQ photo spread prompted Sasha Stone to observe: "There is a school of thought where Oscar is concerned that goes like this: You can win if you can give them rock hard erections." Yowza! So much for the L.A. Times's hilarious awards-season "Heat Meter" -- what we need around here is a meat heater. Amirite? OK, don't answer that. 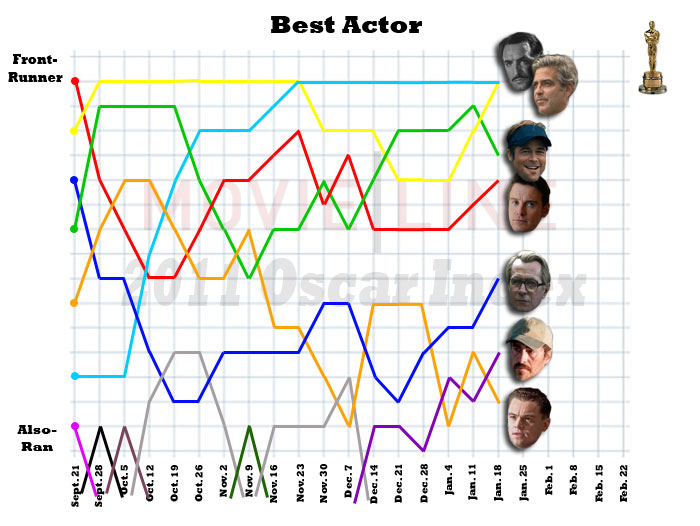 The Globes gave us the Dujardin/Clooney showdown we expected, so whatever. Let's wait and see on that. I'm more preoccupied with the bubble, where I like Oldman to make the cut -- particularly after seeing Tinker Tailor's BAFTA nomination showing. The Tweet of the Week, from Anne Thompson at the Golden Globes, also helps address why:

Listening to Leo on the red carpet explain what J. Edgar was about you could feel eyes glazing over worldwide. It was a hopeless cause.Mon Jan 16 18:46:30 via TweetDeck

Pair that with Steve Pond's observations about Bichir ("Oscar voters have made smart and surprising choices in this category in the past [remember Javier Bardem for Biutiful last year?]") vs. DiCaprio ("He still seems more likely than not to get in – but if he doesn't, this could be one of the least surprising surprises of Oscar nomination morning"), and the general consensus points toward another snub you can hear coming from days away. 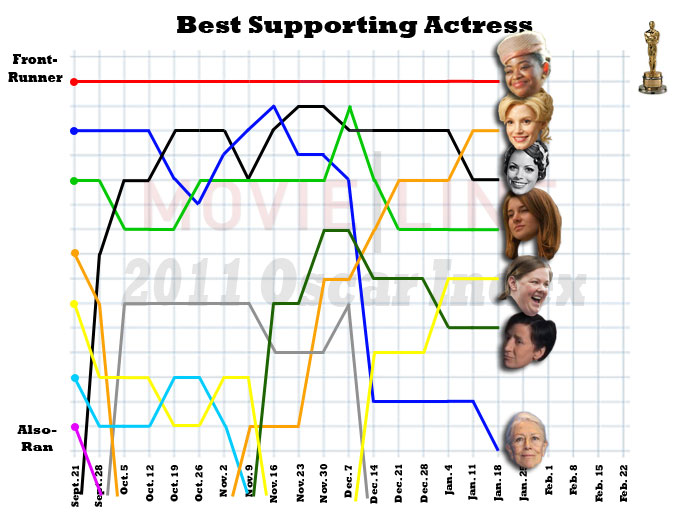 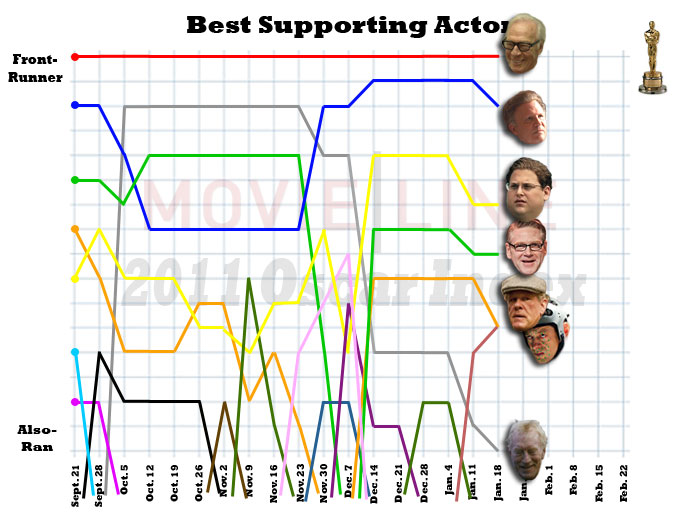 At least one insider foresees the potential of some love for Serkis, but few pundits this week struck a more crucially persuasive tone than Jeffrey Wells: "The SAG members who voted against or failed to nominate Serkis for Best Supporting Actor are pathetic little squirrels." Good luck, Nolte!