Well, this should go pretty fast: The holiday week has offered a dearth of new narratives to trace and pulses to take, with only one film demonstrating any significant mobility in the studies coming out Movieline's Institute for the Advanced Study of Kudos Forensics. Let's get to it! 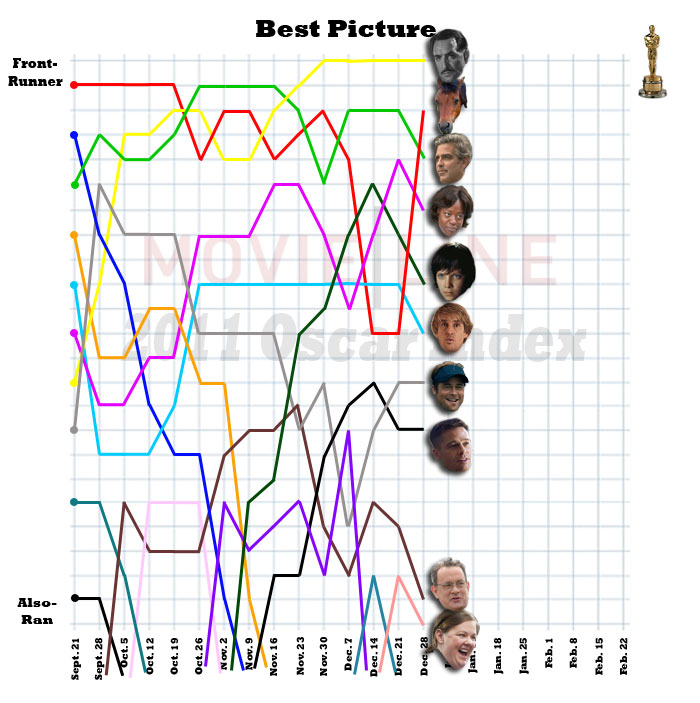 Outsiders: The Girl With the Dragon Tattoo; Tinker, Tailor, Soldier, Spy; The Ides of March; Drive

First things first: The Academy sent out its 2012 nomination ballots this week, a few thousand bits of live ammunition to keep voters alert as they catch up on any an all screenings over the holiday hiatus. And while pretty much every last hint of buzz halted on the late-coming Extremely Loud & Incredibly Close -- except, I suppose, this writer's survey that singled out EL&IC as the "'Awards Season Screener' of choice from family members visiting over the holiday weekend" -- we witnessed a fairly serious resurgence for War Horse.

It all started when DreamWorks and Disney opened up virtually every public screening of the film to card-carrying AMPAS and guild members -- an unconventional mid-season move that nevertheless opened up 2,700 screens to voters mere days before they received their nomination ballots. They have weeks to send them back, of course, but the studios' faith in the film was reflected in its terrific two-day holiday haul; only Mission: Impossible - Ghost Protocol performed better commercially. And with many key critics (including our own Stephanie Zacharek) offering their praises as well, there's not really any choice but to move the Horse back among the front-runners.

Let me just defer to Sasha Stone, who wrote most persuasively on the matter earlier this week:

War Horse has everything your Best Picture winner needs: waterworks, prestigious director (that he mimics John Ford here is a win/win), war (bad Germans even) and men. Lots and lots and lots of men. There is a young girl who tends to Joey for a time, and because he’s a religious figure he works his magic on her inability to do much of anything, what with a disease ravaging her body and all — but the miracle horse! Oh, the miracle horse! And a mother who tends to the boy who tends to Joey — “Someday we’ll be together,” the boy says at the beginning. Looks like there aren’t too many women folk around for the poor kid to fall in love with — but he has the miracle horse, by god. But for the most part War Horse tells the story of young men going into battle and the horses who sacrificed themselves for war. It’s about the inherent goodness of people and thus the Oscar race will underline that and bold it.

Yup. And that's just a socio-historical perspective related to the Academy. Factor in the timing and the early box-office windfall of it all -- not to mention the slumping likes of The Descendants and Hugo in particular -- and there's your War Horse second wind. But is it too early? We shall see -- especially awaiting the DGA and PGA award nominations in the weeks ahead.

In any case, also worth noting in light of the EL&IC stillbirth and the putative Bridesmaids insurgency is Steve Pond's intriguing analysis from the Critics Choice Awards front, where he and the accountant overseeing the Broadcast Film Critics Association nominations -- often cited as one of the more reliable Oscar precursors -- yielded this bit of insight:

A large majority of the Broadcast Film Critics' more than 250 critics cast ballots, which asked them to rank their favorite movies, one through five. On those ballots, 33 different films received first-place votes. Under the Oscar system, the race is immediately narrowed to those 33 films; every other movie is out of the running, no matter how many second- or third-place votes it received. [...]

According to [accountant Debby] Britton, 10 of the 33 films fell below the 1 percent threshold. Those 10 then had their ballots redistributed, with the vote going to the film ranked second on the ballot, assuming that film was among the 22 movies still in the running. (If it wasn't, she would move down the ballot until she found a movie that was.)

When those ballots were redistributed, CMM then looked at what was left. At this point, under the Oscar system, any movie with more than 5 percent of the vote would became a nominee; any movie with less than that would not.

And when Britton did the final math, she came up with eight nominees.

On the other hand, EL&IC actually made the list of Critics Choice Awards Best Picture nominees, so... Yeah. In short, eight nominations sounds about right, but it could swing plus or minus one nominee either way. Developing, etc. 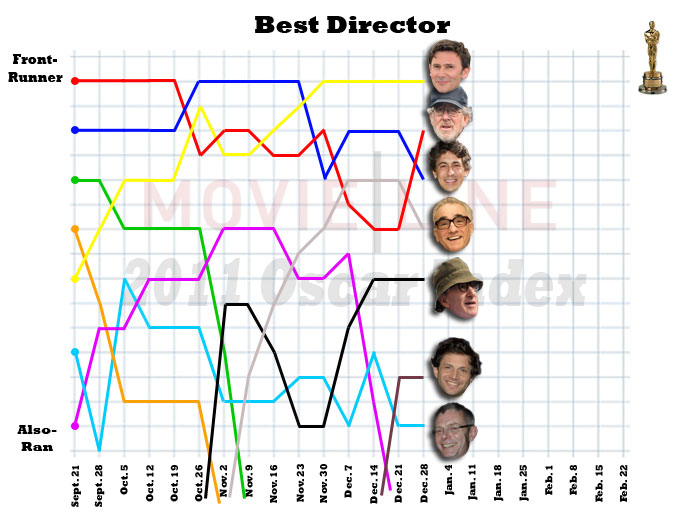 More of the same as above. Really nothing to add. 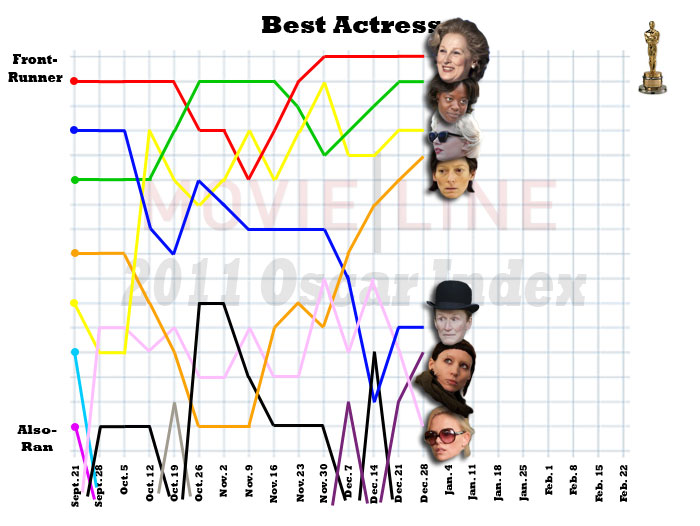 There's a little movement around the also-rans -- Swinton receiving the boost of a slightly more aggressive campaign on behalf of Kevin, Mara reaping the most of Dragon Tattoo's solid holiday showing -- but no one came close to matching the full-court press for Streep. Did anyone not show up for her at the Kennedy Center Honors? I mean, thank you for your Williams love, Oklahoma Film Critics Circle, but my God. 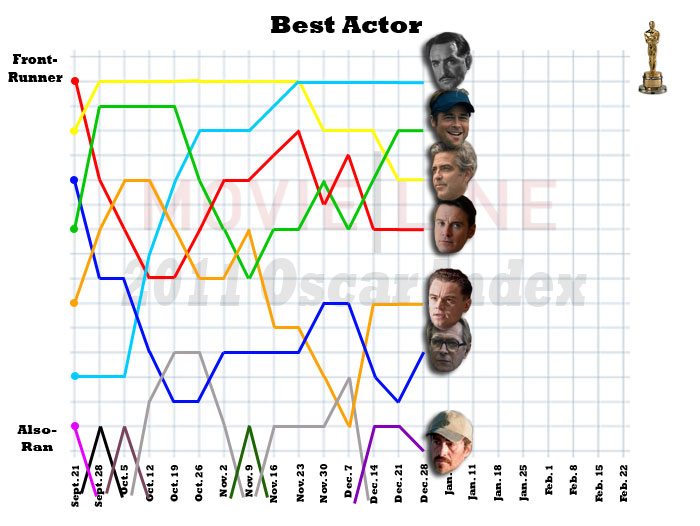 Tinker, Tailor's continued strength in limited release despite any awards love to date -- plus the utter stagnation of anything resembling interest in DiCaprio -- gave Oldman a much-needed boost. Otherwise, business as usual. 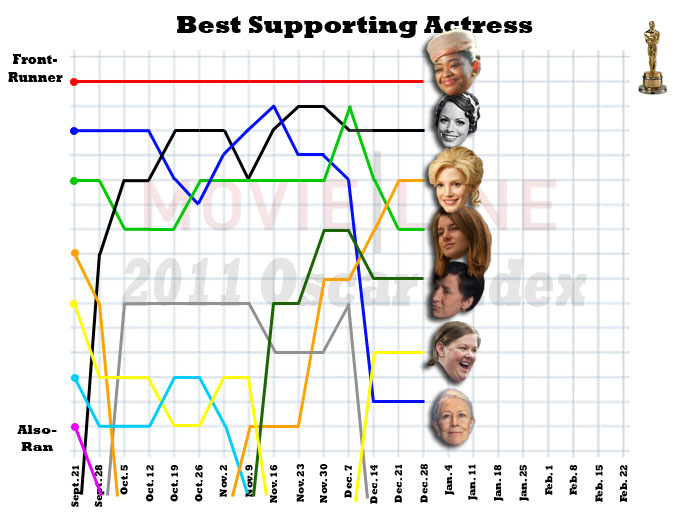 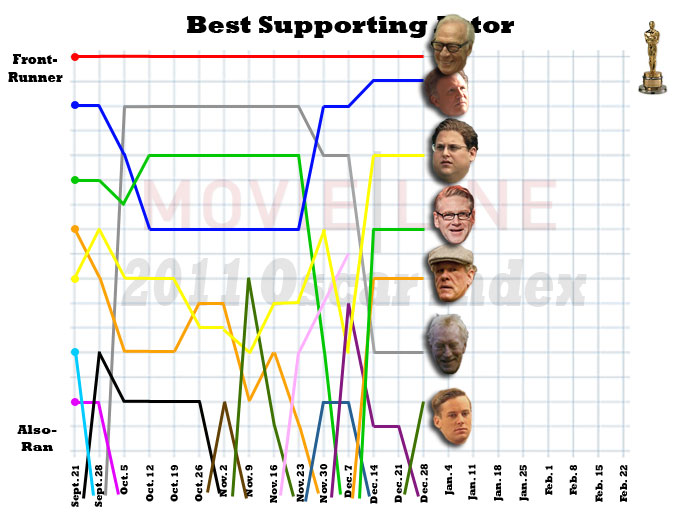 Another slow category overall, though we keep seeing little flare-ups for Serkis, and I took particular interest in Scott Feinberg's observation about Hammer:

Warner Bros., like the rest of the world, was handed a big surprise when SAG nominated Hammer, and now they're doing everything they can to encourage the Academy to do the same: in addition to the requisite ads that highlight Hammer alongside his higher-profile co-star Leonardo DiCaprio (oddly placing one's name beneath the other's picture in some), the studio has him making the interview rounds with Oscar bloggers, and also debuted a special featurette that intercuts clips of the film and behind-the-scenes production footage with highlights of a November Q&A in which Hammer shined.