I'll give Ridley Scott this much: Despite leaving us all with a thousand unanswered questions at the end of Prometheus, he's seemingly packed a multitude of answers into the upcoming Blu-ray, DVD, and 3D Blu home video release. Count down the days — mere days! — until October 8, when the secrets of Prometheus are yours to devour, with a tantalizing look at the spoilery Blu-ray/DVD trailer.

Not even counting spoiler-filled images and between-the-line conclusions hardcore fans can probably draw from this promo video, here are at least five spoilers dropped in the Blu-ray/DVD trailer alone. 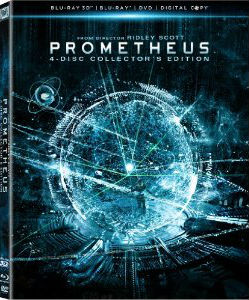 Let's start with, oh, a HUGE SPOILER 30 seconds in that help connect the dots for those of you playing along at home who didn't spend your entire life poring over message boards and spoiler threads to figure out WTF was going on in Prometheus:

1. "In my mind the Engineer sacrificed himself with this virus and created this horrific creature," says an unidentified person, who presumably has knowledge of the film's secrets even though duh, we know this already.

2. Production designer Arthur Max answers at least one burning question, kinda, which connects Prometheus directly to Alien: "In the original draft it was LV-426."

Undetermined: At what point that connective tissue was rewritten for the final film, or not, to confuse everyone.

[Side note: Concept art of the alien penis snakes! Not a spoiler, but fun.]

3. Scott with the sequel plug: "If we do a sequel to this prequel we'll find out who this race [The Engineers] was." We'd better.

4. A glimpse of the alternate beginning, which suggests that the sacrificial Engineer who drank the goo and plummeted to his life-spawning fate was part of a larger organized ritual of some sort. That does make a bit more sense. Also: Ain't no party like an Engineer party 'cause an Engineer party leads to ultimate destruction for all of humankind! Yeaaah!

5. And hey, an alternate ending! The Engineers came from "paradise," eh? Fingers crossed for an entire reel of deleted severed-head David nuggets of wisdom.

Watch the Blu-ray/DVD tease now and stock up on the essentials because seven hours of special features?? You know where I'll be on October 9.