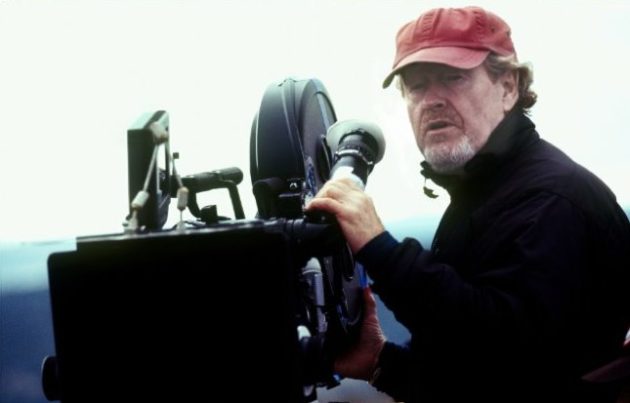 Whether you loved Prometheus or were left frustrated by it, everyone who's seen Ridley Scott's sci-fi pic can agree it leaves you with a plethora of unanswered questions. So maybe it's good news that Scott has revealed the eventual DVD/Blu-ray release will feature deleted scenes and a 20 minute-longer extended cut of the film — even if Scott is perfectly happy stymieing audiences with his theatrical cut.

Scott's chat with Collider sheds light not only on what the Prometheus home video release might contain, but on Scott's attitude toward bonus materials and post-theatrical cuts and the film nerds who love to pore over every second of supplemental materials.

"[The theatrical cut] is fundamentally the director’s cut. But there will be half an hour of stuff on the menu because people are so into films — how they’re made, how they’re set up, and the rejections in it. That’s why it’s fascinating. So this will all go on to the menu."

Riiight. So Fox wants to issue a bonus-packed Prometheus extended cut DVD/Blu-ray package. Who's Scott to get in the way? He's a business, man! (Ka-ching!) It sounds like Prometheus's theatrical cut is Scott's ideal director's cut, but he promises a half hour of bonus material for fans who want to go deep into detail:

"I’m so happy with this engine, the way it is right now. I think it’s fine. I think it works. It can go in a section where, if you really want to tap in, look at the [DVD] menu. To see how things are long, and it’s too long."

And my favorite part of the chat (emphasis mine):

"Dramatically, I’m about putting bums on seats. For me to separate my idea of commerce from art — I’d be a fool. You can’t do that. I wouldn’t be allowed to do the films I do. So I’m very user friendly as far as the studios are concerned. To a certain extent, I’m a businessman. I’m aware that’s what I have to do. It’s my job. To say, 'Screw the audience.' You can’t do that. 'Am I communicating?' is the question. Am I communicating? Because if I’m not, I need to address it."

Along the lines of those scenes that viewers might agree are "too long," Scott describes a scene that wound up on the cutting room floor, seemingly for good reason:

[SPOILERS] [In the deleted scene described by Scott, Noomi Rapace's Shaw fights with the remaining Engineer in a hand-to-hand fight.] "The problem about it is, while she gives as good as she gets with an axe... he’s so big, for him to be clouted with a conventional weapon somehow diminished him. It’s subtle. It’s drama. I didn’t want to diminish him by having this person who has a weapon to be able to back him off. It minimized him." [END SPOILERS]

Hmm, let's see now. "Am I communicating?" Scott claims he asks himself. Well... that's debatable. (See Movieline's discussion of the still-unanswered questions and dumb script moves in Prometheus.) As for future Prometheus alternate/extended versions, I guarantee folks on both side of the Prometheus fence will clamor for a gander. The question is, will we get any real answers?