There's a scene in the Paul Thomas Anderson's enthralling new film The Master where Lancaster Dodd (Philip Seymour Hoffman) — founder and leader of a cult-like movement called The Cause — instructs his "guinea pig and protege," the aptly named Freddie Quell (Joaquin Phoenix) to face another man hurling taunts and insults at him without losing his hair-trigger temper.

I felt like I was being put through a similar test on Tuesday night when, after being invited to a hastily arranged 70-millimeter advance screening of The Master at the wonderful Ziegfeld Theater in Manhattan, I arrived at the will-call table to find a crowd that, had they been carrying torches, would have been at home in the angry villagers scene of Frankenstein. 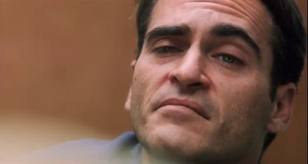 The reason for their anger became apparent shortly after I joined the throng:  A woman with bold eyeglass frames and a nervous look on her face announced to the mob that there were simply no more tickets left to hand out.  Those who did not make the cut were instructed to sign up for a Thursday screening of the film.

I managed to get Eyeglasses' attention and explained that, as instructed on Monday, I had confirmed my attendance. She shrugged her shoulders and  replied that the screening had been overbooked and my tickets had simply been given away. To add insult to injury, just a few seconds before Eyeglasses' you're-shit-out-of-luck announcement, one of Arianna Huffington's minions slunk up behind me, invoked the HuffPo priestess' name, and  received an envelope with tickets.

As a longtime observer of the Harvey Weinstein school of stealth marketing, I found the scenario more fascinating than infuriating because in New York preventing a large group of culture addicts from seeing a movie that everyone's been talking about is actually a sneakily smart way of building interest in the all-important New York market.  Now, I'm not saying the Weinstein Company hosed all those people on purpose, but New York is all about access, and last night, getting into The Master became a bit like getting into Studio 54 in the late 1970s. For most Gothamites, rejection is a tonic: When someone tells us we can't do, see or experience something, we redouble our efforts and, better yet for people like  Weinstein, in our quest to succeed, we recruit our friends and infect them with the same passion.

Without going into details, that's exactly what I did, and after seeing The Master, I'm glad I didn't take no for an answer. (And, by the way, for a screening in which all of the tickets had been given out, I didn't have any trouble finding a primo aisle seat at the front of the balcony.)

To use a term from the film, I am still processing The Master. It's an intelligent and emotionally complex film that doesn't provide any easy answers the way that so many films do today.  But if I can't quite commit to saying it's a great film, I can say that it has more than a few moments of greatness — and those usually occur when Joaquin Phoenix is onscreen.

Phoenix gives the performance of his career so far as the feral Freddie Quell, a naval veteran, who can make moonshine out of torpedo fuel and anything else on hand. ("You can't take this life straight, can you?" Dodd's wife, played by Amy Adams, tells Quell at one point.)

Freddie is the product of an alcoholic father, an institutionalized mother and a traumatizing war, and Phoenix literally embodies these psychic wounds while portraying a lost soul who is menacing, heart-breaking and darkly comic — sometimes all at once.

The New York Times reported that Phoenix studied films of animals in captivity to prepare for his role, but his performance, which is pure id, brought to mind other references. The hunched, arms-akimbo way in which Quell stands recalled Martin Short's Ed Grimley character from Saturday Night Live, and Groucho Marx. His squinting, sneering tomahawk-like face made me think of Hammerhead from The Amazing Spider-Man comics. 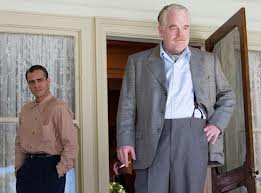 When I wasn't marveling at Phoenix's performance, I found myself thinking that all of this talk about The Master taking on Scientology is a marketing MacGuffin. Yes, Philip Seymour Hoffman plays a L. Ron Hubbard-like character, but this movie is really about the relationship between two kindred spirits who, in some respects, are Freudian polar opposites. Quell is pure id, while Dodd is mostly superego, and each seems to yearn for some of what the other man has.

For me, one of the key lines of the movie comes near the end when Dodd tells Freddie that if he can find a way "to live without serving a master --any master," he should report back.

Like I said, I'm still processing The Master, and I plan to see it again as soon as I'm able.  Thanks to Harvey Weinstein, I suspect I'll be waiting in a long line.