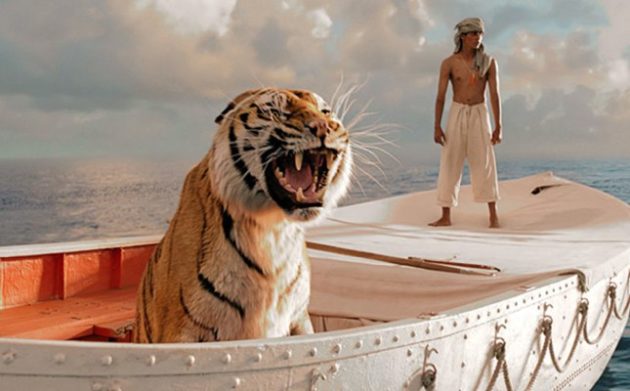 Every year, studios, exhibitors and press gather in Vegas for the annual hype harvest that is CinemaCon (née ShoWest), glimpsing first looks, clips and other previews of hotly anticipated movies to come. Surprises invariably appear, for better or worse, and conversations naturally ensue. Fine. What is not fine — at all — is grounding an Oscar frenzy in 10 minutes of footage from an unfinished film with a release date eight months away.

Ok, so Ang Lee's "Life of Pi" will be getting a best picture Oscar nomination. The footage screened at #CinemaCon could claim one for short!

Mark my word, based on the footage shown at #cinemacon Ang Lee's LIFE OF PI is going to be a MAJOR player at this year's Oscars.

Or this, in response to a (reasonable) skeptic:

@DrewAtHitFix I read Life of Pi. That plus Ang Lee, & the ten minutes I saw--which were stunning--and release date make it a contender.

I mean, there you go: Ang Lee directed an adaptation of a celebrated novel that 20th Century Fox moved into its Dec. 21 slot nearly a year ago; awards-chasing was the plan all along. And again, that's fine! But a couple things: First, we just got done with the last Oscar season. I literally only finished my set of Uggie cookies last week. The summer movie season isn't even officially underway yet, and we're leaping into Oscar speculation?

Also, it's 10 minutes of footage. Work-in-progress footage, to boot; "It's unfinished!" Lee told the CinemaCon audience, some of which was reportedly stirred to tears. "When you see the movie, it will be a lot more moving." Maybe! Maybe not! I hear a line like that and I think of Stephen Daldry explaining Extremely Loud and Incredibly Close dailies to studio execs. Anyway, we're talking about maybe 5 or 6 percent (or even less) of an epic fantasy-drama starring a CGI tiger. "[I]t's no different than Comic-Con, I guess," wrote Kristopher Tapley, "where Sucker Punch looks like it could be an awesome movie for all of 600 seconds." Or where Lee could get fans drooling in 2002 with a... Hulk slide show. Remember that? Oh.

Which raises another issue: While Lee is unquestionably a master and one of the sweetest guys you'll ever meet, his ambition has betrayed him before. Ride With the Devil was Oscar bait gone bad (thanks in large part to studio meddling, but still), and nobody — least of all Lee — was happy how Hulk turned out. Lust, Caution was musty, turgid smut. Finding Woodstock was fussy, futile nostalgia. He's just as capable of overextending his vision as he is of rendering it perfectly in two dimensions — let alone three. Which Ang Lee will show up this fall?

Regardless, the Lee at CinemaCon had at least one right idea for sure. "To be honest with you, I like to be modest," he told the LAT. "I would like people to get surprised about my work, instead of it being over-hyped." Let us oblige. Please?