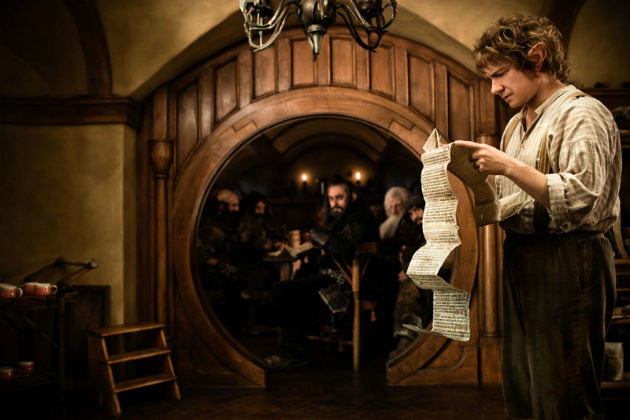 Unveiling 10 minutes of Hobbit footage in 3-D at the revolutionary frame rate of 48 frames per second (vs. the standard 24 fps), as Warner Bros. did Tuesday at CinemaCon, should have been the first big buzz moment for Peter Jackson's return to Middle Earth. The immediate reaction to the presentation, however, was anything but good news for the studio or for proponents of the kind of cutting-edge high frame rate cinema technology Jackson and folks like James Cameron and Douglas Trumbull have been championing as the future of film. Instead, it left members of the blogger corps. calling it "jarring," "non-cinematic," and "like a made for television BBC movie," predicting that audiences will be split in embracing the brave new advance.

The footage, preceded by a taped introduction by Jackson, drew breathless raves for portions of aerial footage whisking, in the style of an IMAX nature doc, over wide landscape shots that seemed to prompt unanimous praise. Then came the character footage, which told another story: At its increased frame rate, Jackson's 48-fps scenes were reportedly almost too realistic, approximating what many compared to an HD TV or television soap-like quality.

...Here's what The Hobbit looked like to me: a hi-def version of the 1970s I, Claudius. It is drenched in a TV-like - specifically 70s era BBC - video look. People on Twitter have asked if it has that soap opera look you get from badly calibrated TVs at Best Buy, and the answer is an emphatic YES.

The movement of the actors looked… strange. Almost as if the performances had been partly sped up. But the dialogue matched the movement of the lips, so it wasn’t an effect of speed-ramping... It didn’t look cinematic.

Variety's Josh Dickey was a bit more reserved in his reaction:

48 fps has an immediacy that is almost jarring. And lighting it just right will be a learning process, as 3D was and still is...48 fps also, unfortunately, looks a bit like television. But it does bring 3D to a different level.

And The L.A. Times' Amy Kaufman called the feel of 48fps "hyper-realistic," quoting one anonymous projectionist in attendance ("It was too accurate -- too clear") as well as an unnamed film buyer who wasn't quite ready to discount The Hobbit's playability:

"The question is if people want to watch movies that really look real or not. I was expecting a subtle difference, but this was dramatic," he said. "Might that work against a narrative? I don't know. But I'm not going to judge it based on 10 minutes."

Stay tuned for more from the Hobbit camp as Warner Bros. and Jackson regroup from the CinemaCon blow, and in the meantime sound off below: Does 48 fps still seem like the future of cinema?