You know that when two of the most respected pundits in all of Oscardom argue (within days of each other!) for curtailing both the epic Academy Awards season race and the ceremony in which it culminates, patience for all this crap is wearing thin. With that in mind — and also considering that the "race" for most of these categories ended weeks or months ago — who's up for an Oscar Index lightning round? (The entire staff at Movieline's Institute for the Advanced Study of Kudos Forensics raises its hands.) OK, then — to the Index! 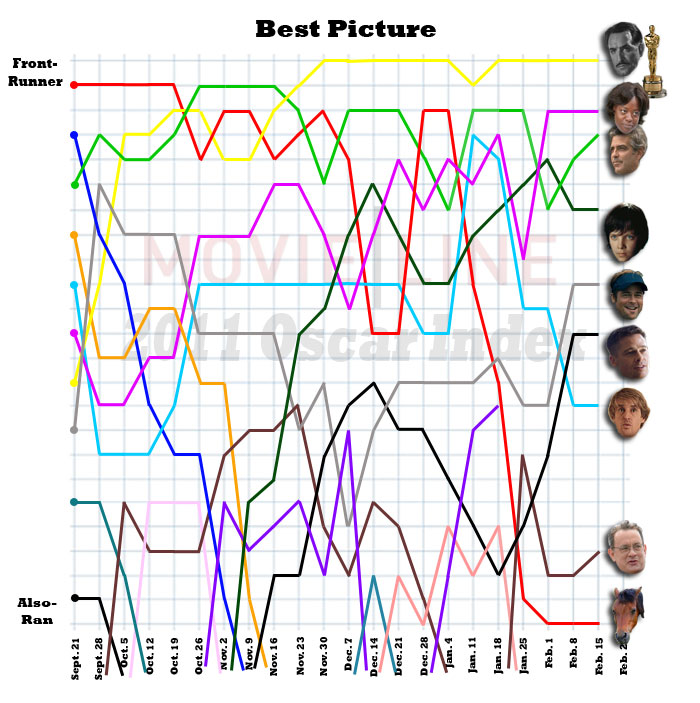 Though we cannot rule out any of these underdogs' mounting a behind-the-scenes charm blitz before Academy polls close next Tuesday, or the implications of the reminder that no movie about movies has ever won Best Picture, The Artist's triumph at last weekend's BAFTA Awards only tightened its seeming lock on the Best Picture Oscar. Still, let's hear it for The Descendants, blazing the media afterburners for a desperately needed uptick. (The Help, by comparison, got a forlorn-looking electronic billboard.) Also, don't look now, but somebody actually dared to write thoughtfully about The Daldry. Not a minute too soon! Anyway, yes, Steve Pond, we're all with you: Let's just end this farce already. 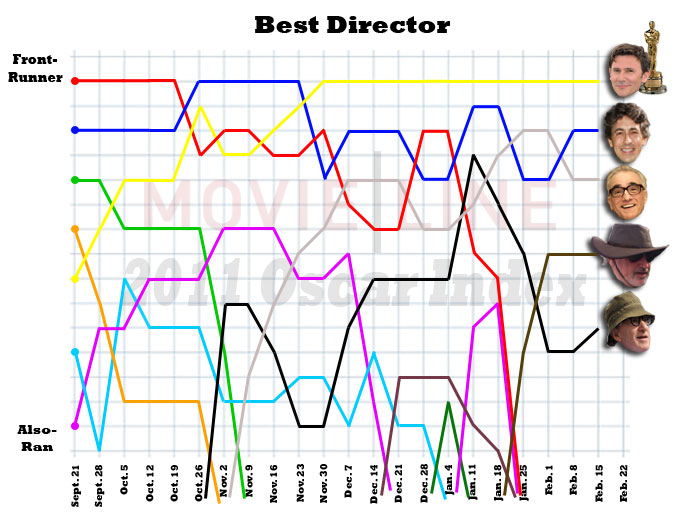 While the BAFTAs nudged Hazanavicius ever closer to Oscar glory and Sasha Stone contemplated the beneficiaries of a potential split vote — which is really the most that the pundits and campaigners engineering an anti-Artist backlash can hope for at this point — only Allen received a truly needle-moving endorsement this week. Ladies and gentlemen, I give you Nick Jonas: "[F]or directing, I chose Midnight in Paris because Woody Allen is my favorite. He’s awesome.[... T]here would be a Woody Allen film on the tour bus every now and again. There’s always a Woody Allen movie on." Now you know. 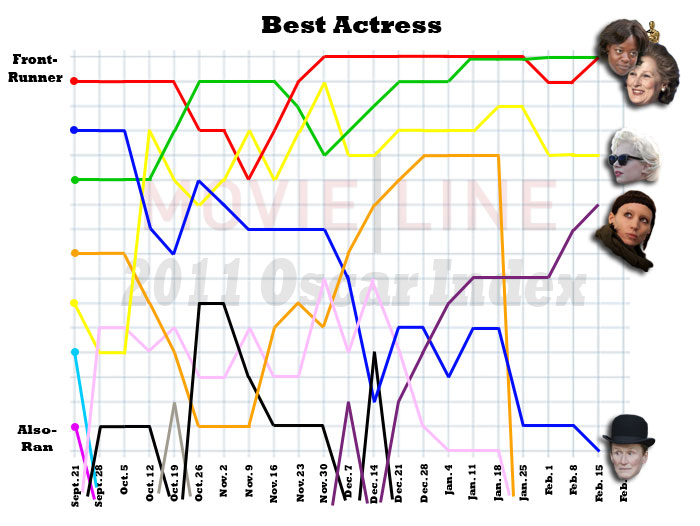 "I hope we can all agree that when the Oscar conversation involves actresses as massively gifted as Meryl and Viola we all win," wrote Nathaniel Rogers of the juiciest race going. "If only we could have a tie!" Haha, fine for now, but NO. Don't give the Academy any ideas; it'll totally screw up my Oscar-party ballot.

That said, it's quite a conversation, with the BAFTAs and the Berlinale's gala tribute tilting momentum back Streep's way. But if we're to believe that the continued dissemination and discussion of these events among awards observers and the media cognoscenti are really the factors that persuade Oscar voters (and I guess we are to believe that, rightly or not — otherwise, what are we doing here?), then wouldn't it follow that the continued dissemination of Davis's boundless class, intellect and talent on the campaign trail would either match or supersede Streep's own carefully cultivated hype? Take this incredible appearance that Davis and Help co-star Octavia Spencer recently made on Tavis Smiley's show, an interview that's been covered here, there and everywhere [transcript via The Carpetbagger]:

“I want you to win,” Mr. Smiley said, “but I’m ambivalent about what you’re winning for.”

Ms. Davis was direct. “That very mind-set that you have and that a lot of African-Americans have is absolutely destroying the black artist,” she said.

“The black artist cannot live in a revisionist place,” she added. “The black artist can only tell the truth about humanity, and humanity is messy. People are messy. Caucasian actors know that. [...] We as African-American artists are more concerned with image and message and not execution,” she said, “which is why every time you see your images they’ve been watered down to the point where they are not realistic at all.”

“My whole thing is, do I always have be noble?” she continued. “As an artist, you’ve got to see the mess.”

The Academy has never really given any indication of having taste that would or could be moved by a case like that. But if its members in the actors branch in particular do have that taste, and they can hear her voice above the noise, then Davis may yet be the actress to beat. For now, meanwhile, it's just too close to call.

In other brief news, Mara got another profile-boosting close-up while Close — who's facing such delightful headlines as "Glenn Close: Next Queen of Oscar losers? may as well ask to just be awoken when it's Feb. 27. Tough world. 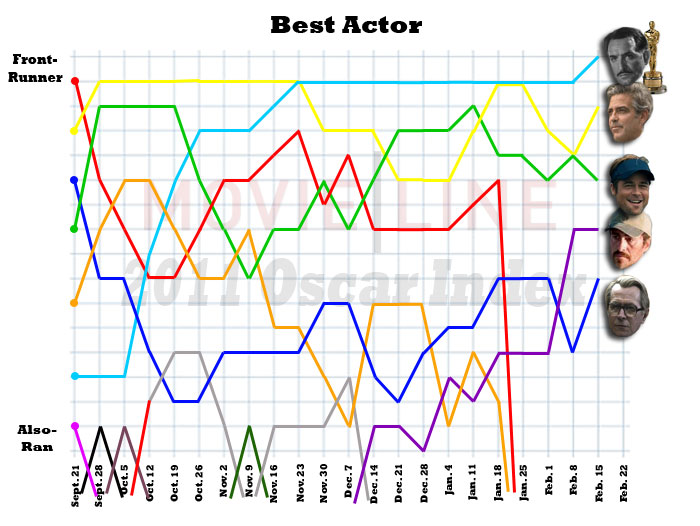 Sure, Dujardin claimed the BAFTA and made more zeitgeist-y viral-video waves in 48 hours than than his competition combined has made all years, but Clooney and Oldman in particular keep working the circuit in search of hearts and minds. Watch out for the latter candidate, who may yet coax away those crucial "sentimental favorite" votes that Clooney never really deserved in the first place (not with three Oscar nods for acting in five years, anyway) and which have been known to split categories. Could be interesting, though I'm probably just hallucinating non-existent intrigues at this point. You tell me. 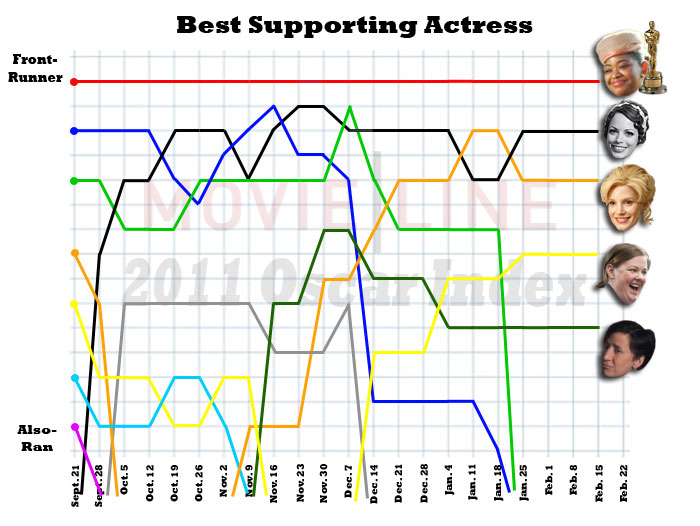 Bejo magically reappeared on the scene for about 20 seconds with an interview and a 15-year-old short film called Pregnant or Lesbian? And that should just about do it. 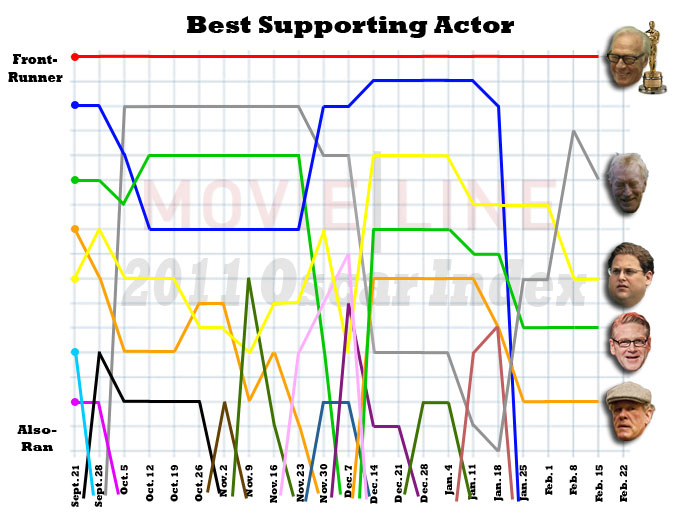 Anyway, see you next week with the conclusion of the 2011-12 Oscar index!