Oscar Index: It's the Charm, Stupid

"Let's have a moment of silence for the suffering Oscar bloggers as they enter the most trying and mortifying weeks of their labors." Such was Glenn Kenny's tweeted lament earlier this week -- one eerily anticipating today's latest, sanity-thrashing edition of Oscar Index. And that's just its effect on readers! You really don't want to see the catatonic pall saturating Movieline's Institute for the Advanced Study of Kudos Forensics. On the other hand, we're gonna make a fortune recycling this mounting pile of wine bottles. To the Index! 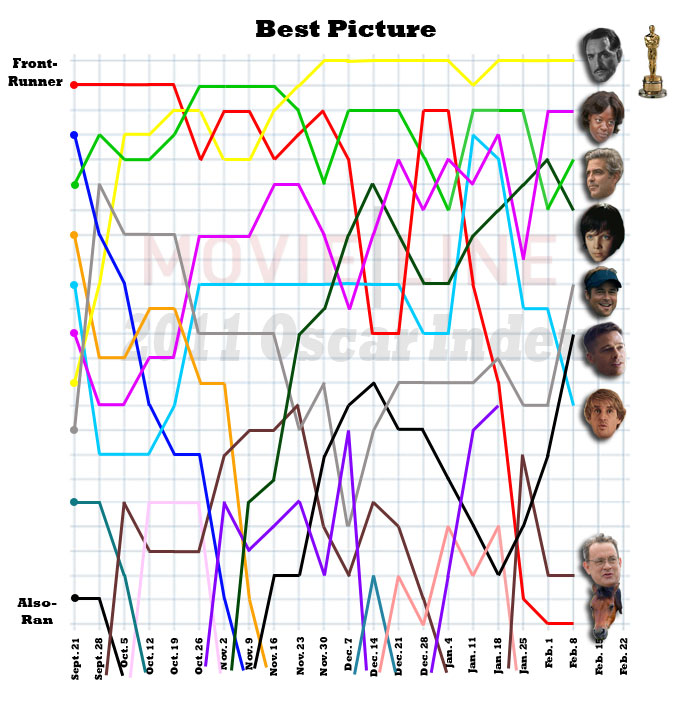 Some shuffling in the ranks reflected little more than two things: 1) The profile boosts that certain films' respective individual nominees received in the acting and directing categories, and 2) our arrival at the harsh depot known as Smug City -- an awards-season juncture to which we return seemingly every year now, described this time around by EW's Owen Gleiberman:

The audience — remember them? — is no longer a very big part of the equation. I had assumed, mistakenly, that because The Help was an astonishingly big hit, and because its success sprung from the way that it clearly touched a racial-cultural nerve in people, that the movie’s organic popularity — as opposed to the heavily marketed freeze-dried quasi-popularity of The Artist — would be decisive at the Academy Awards. But all I was demonstrating was a mode of analysis about how the Oscars work that is now, more or less, completely outmoded.

Seriously, you've heard this all before: Gleiberman goes on to contrast the populist glories of Oscar nights past (e.g. The Sting, Rocky, even creatively challenging smashes like The Silence of the Lambs) with recent triumphs just barely removed from the art house (No Country For Old Men and especially The Hurt Locker) as a means of writing off The Artist's presumed Oscar-night victory over The Help. Yet he makes supplementary points about the smash The King's Speech (while overlooking another about the hit Slumdog Millionaire) underscoring an even more critical factor we've seen consistently in this year's Index: It's the charm, stupid.

It sounds obvious. Yet every time we look for someone new to blame for the disconnect and/or disaffection gripping the Oscars, we always manage to forget the only true currency of any value for any of these nominees. The contemporary Oscar economy runs entirely on charm. Your movie can make $1 million or $1 billion, be a polarizing scourge or smothered in plaudits and acclaim. You can place ads everywhere, send thousands of DVD screeners and engineer a fortune's worth of publicity. But by the time nomination ballots are mailed in late December, if you haven't found a way to charm a vote out of an Academy member, then you and your film are about as long for the awards race as Angelina Jolie is for a burger-eating contest.

Steven Spielberg and War Horse, for example, couldn't mount the glad-handing charm offensive ultimately necessary for any legitimate chance at Oscar supremacy. I mean, at least Clint Eastwood had the advantage of stars to push forth J. Edgar, but you can barely get Leonardo DiCaprio (or even Eastwood) to promote a good film, let alone a terrible one (DiCaprio wasn't even in the right hemisphere to do so, shooting The Great Gatsby in Australia all winter), so we saw how that worked out. Among slightly better-faring films, Midnight in Paris makes up for the lack of personal charm from the absentee Woody Allen and Owen Wilson by whisking voters into its nostalgic ensemble charms. Hugo leapfrogged Midnight exercising both nostalgic ensemble charms and a passionately invested filmmaker. Tree of Life compensates for its fleeting aesthetic charms thanks in part to charming stars on the circuit for other movies with charm of their own (though, alas, maybe not enough to spare for the Big Dance). The Descendants is led by the crown prince of awards-season charm, who can only hope that King Harvey Weinstein chokes on an M&M and lets someone else reign temporarily while he flails for aid.

Which brings us to The Artist and The Help. I love you, but listen closely: No one cares which you think is superior, or how predictably you (or I) think everything has turned out, or your personal pleas, or if you look forward to eating those Artist-themed Oscar cookies just for the metaphorical pleasure of shitting them out, or if Jean Dujardin appears in a naughty French movie poster, or whether The Help is or isn't just a condescending pile of white-liberal-guilt piffle, or what 2011 releases you'd prefer in either film's places as we head into awards-season's home stretch. All that matters is whether or not the nominees' collective principals have the stamina, timing, access and appeal to capitalize on their late-season standings, and which will extend those narratives more deeply through the media.

As such, there's really no more to say about the Best Picture race as it stands today. Everyone is told by the campaigners and commentariat alike that The Artist is the film to beat -- except that maybe The Help has enough underdog muscle and goodwill to surmount it in the late-going, and what if the votes are split and George Clooney or Martin Scorsese did do enough to nudge their babies up the middle? The immutable truth is simpler: We think ourselves too smart to be this helpless against their charms, and we hold that helplessness against the wrong people. Even The Daldry, which had no outwardly detectable charm reserves to speak of before nomination morning (yet, it should be noted, earned that nickname for a very Academy-friendly reason), got nominated for Best Picture -- while The Girl With the Dragon Tattoo lingers in the periphery. That's life for you in Smug City. Your money's no good here. 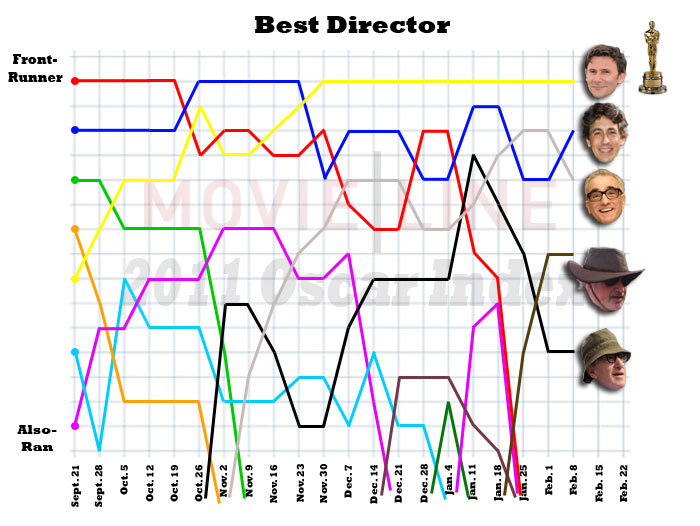 No charm or smugness slouch himself, Payne won a nice endorsement this week from the American Cinema Editors, who named the Descendants director their Filmmaker of the Year. Keep in mind that not so long ago this award used to go to old pros in their twilights (Rob Reiner or Richard Donner, anybody?) before last year winding up with Christopher Nolan; if the Academy's editors branch really did want to get behind Payne and The Descendants -- whose own cutter Kevin Tent is nominated for an all-important Best Editing Oscar -- then that could translate to a movement in other branches as well. Repeat: Could. (Though have you seen the Descendants box-office lately? For a movie that only 12 days ago went to 2,000 screens? Jesus Christ. I'll bet Fox Searchlight can pack that with some charm of its own.) 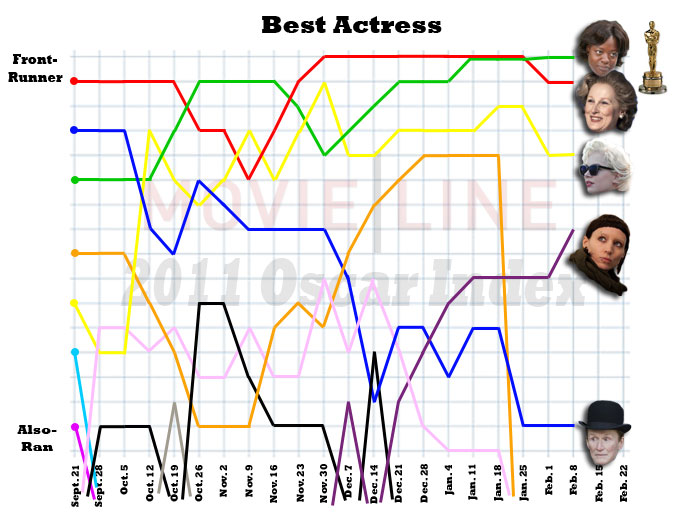 Let's not belabor what we covered last week: Viola Davis could have gone the Mo'Nique anti-charm route and still won on talent and performance alone. But instead, she's evincing both the humility of her role's profile and her team's broader insistence that people take The Help seriously, topics about which Oscar oracle Mark Harris had yet another terrific piece this week at Grantland:

[A]n award to Davis for making the absolute most of an imperfect part in an even more imperfect movie with a terribly imperfect grasp of history would be the truest definition of a milestone: A mark along a path by which progress can be assessed, and perhaps also found wanting. Finally, we have a category with the kind of churning emotion and uneasy subtext that too much of this steadily room-temperature Oscar season has been lacking.

"Category" is a little generous under the circumstances: It would seem to imply that among the rest of the nominees we can find anything more stirring than Weinstein mailing literally barely legal Iron Lady ads exhorting Streep for the Oscar win because, you know, it's been 29 years. Not very charming! And for every pro-Streep pundit broadside there's a pro-Davis reaction seemingly just waiting for it. Streep is going to have to press a lot of flesh in the next two weeks to overcome the charm-inflected reality that has sunk her hopes time and again for years now: It's never about how you badly you want Oscar. It's about how badly he wants you. 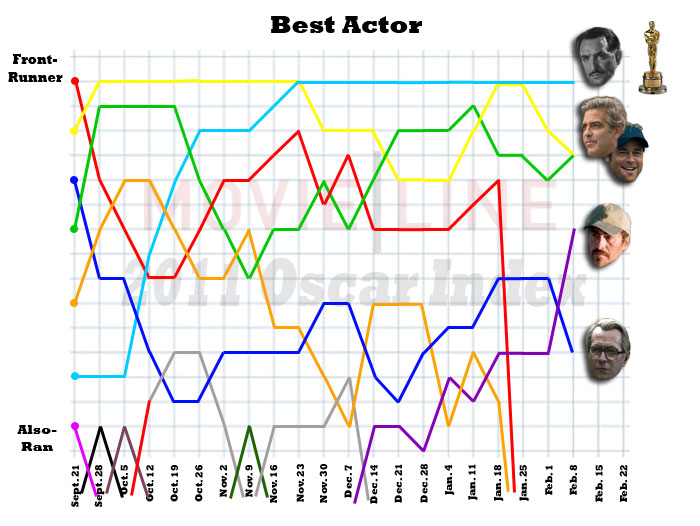 Pitt made some key publicity stops at places like The Daily Show and Today before docking at Monday's nominees luncheon, finally catching up with Clooney in the quest to lose to Dujardin.

Or maybe all three of them will soon be even in the quest to lose to Bichir, who is coming harder than any candidate besides maybe Max von Sydow -- who, alas, at age 82, cannot come so hard these days, even against fellow octogenarian Christopher Plummer. (Ahem. I didn't mean it that way.) Anyway, find me another candidate here about whom voters still have anything to be genuinely curious about, or whose devotees are so eager to oblige them with a profile here or a homemade ad campaign there, or who has so effectively ridden the wave of social media, or who moves even the waitstaff at the nominee's luncheon enough to join the chorus of praise. There is no darker, hungrier horse on the horizon, and I'm as ready as anybody to call this a four-way race. 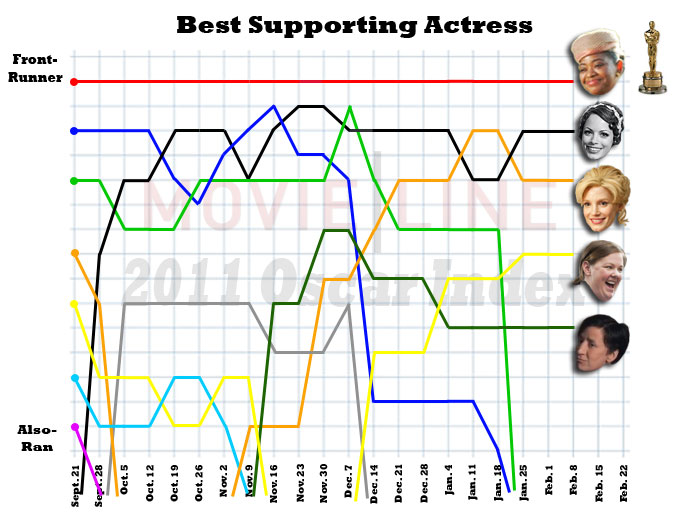 Did you hear that Jessica Chastain had to miss the nominee's luncheon because of a -- wait for it -- work commitment? What a bummer -- though not as much of a bummer as... 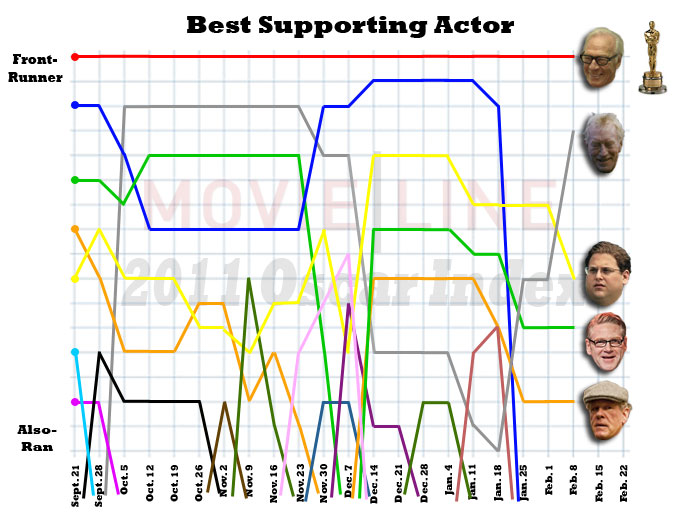 Someone! Quick! Call the Plummer! The other major nominee luncheon no-show happened to miss what was generally perceived to be the loudest ovation of the day -- for von Sydow, who was confined to a chair in the front row while reportedly recovering from broken ribs. That guy always could make suffering look great; well-played, Team Daldry. Anyway, it's hard to believe this to be any legitimate harbinger of derailing the front-runningest front-runner in all of front-runnerdom, but stranger things have happened.