Oscar Index: Help is on the Way

It's a little difficult for the specialists at Movieline's Institute for the Advanced Study of Kudos Forensics to come into work these days, what with the pall of predictability settling in over the awards landscape and the painstaking studies into backlash physics yielding less and less of practical substance. What's a frustrated kudologist to do? Besides drink for the next four weeks straight, I mean. Let's look for ideas and encouragement for all in this week's Oscar Index. 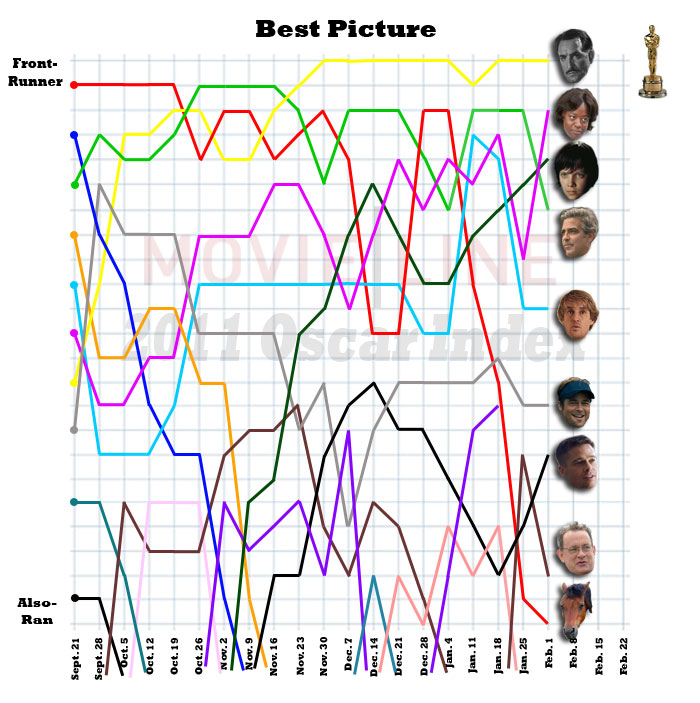 But then, also at SAG, came The Help -- first with Viola Davis taking a commanding lead over Meryl Streep (and thus Harvey Weinstein, the season's resident awards Merlin who distributed The Iron Lady and, of course, The Artist) in Best Actress and, more surprisingly, The Help swiping Best Picture to close out the night. Factor in Octavia Spencer expected Supporting Actress sweep, and you'll spot all the signs of a surge stirring where it matters the most: in the Academy's Actors Branch, the most populous voting bloc in an organization whose final Oscar ballots just went out today. Nice timing, there.

Still: Does it matter? Maybe so, comes the word from some corners of the awards commentariat. "[W]henever you watch history being made you feel the power of what these silly and otherwise pointless awards shows can sometimes do: move the needle ever so slightly," observed Sasha Stone at Awards Daily. "No movie has taken three SAG awards since Chicago, which went on to win Best Picture — as did three of the last four movies to win the Cast award," notes Mark Harris at Grantland. Or maybe not, suggest others. "Tate Taylor's debut didn't land a best film editing Oscar nomination," wrote Gregory Ellwood at HitFix. "The last time a film won best picture without an editing nod? Ordinary People in 1981, 31 years ago." Womp womp.

All that being said, I increasingly doubt that this is a race that will come down to historical precedents -- at least not statistical precedents, anyway. In fact, Harris offered the most provocative "data" of the week, which was ultimately just conjecture (but very interesting conjecture):

Front-runners can’t be taken down abstractly; votes need to coalesce around a single opposition candidate, and even if there had been a chance of that happening this year, the unexpectedly wide field of nine nominees probably would have demolished it. Remember, The Artist doesn’t need to be a consensus choice to win Best Picture — depending on the way the ballots fall, it could technically win by receiving just 12 percent of the votes, and very credibly win with three out of four Academy members voting against it.

I happened to be in the Oscar auditorium the year Crash won Best Picture, and I can report that what sounded on TV like a gasp of surprise resonated in the theater as something closer to horror. Very few people I ran into that night had voted for Crash. But it didn’t matter, because the vast majority of Oscar voters weren’t anywhere near that theater. They were at home watching TV. And a lot of them loved Crash. And a lot of them love The Artist.

This would mean that Best Picture is shaping up as the kind of hearts-and-minds battle we've all seen before. Which, despite all my confidence in The Artist on Monday (and despite even Oscar oracle Harris's conclusion that "[t]here’s no reason to assume it isn’t going all the way"), suggests that peer respect for the Help ensemble, persisting conversations about race during awards season, and the Academy's enduring white guilt are precisely the types of influences that The Help needs to shepherd that aforementioned 12 percent of votes out of The Artist's stable and into its own. Think of it this way: It already has at least the 5 percent of first-place votes required just to be nominated. In that respect, The Help and The Artist are on even turf. Each will have its devotees beyond that; it's anyone's guess how they match up. But if you were told that you were an underdog versus a favorite against whom you've rallied demonstrable support among working actors and writers, and you could build a game plan around a franchise player like Viola Davis, wouldn't you feel like you had a pretty good shot at the frontrunner? Especially with the Weinsteins facing a hilariously timed lawsuit over other, erstwhile Oscar bait and with DreamWorks able to reinforce The Help's aesthetic powers with its commercial muscle. Plus they can turn around and say it's not even the biggest awards-darling in its native France. That's got to be worth something, right?

In other, lower-wattage news, Madonna -- an Academy member herself -- is stridently Team Tree (which, incidentally, got a rare, favorable Academy allowance to list four producers as its Best Picture nominees): "Tree of Life is stunningly beautiful. That’s my favorite," she told the L.A. Times. "I think it’s a spiritual, deeply profound movie. My mouth was hanging open the entire time I was watching it." Talk about winning hearts and minds! Suck it, The Daldry. 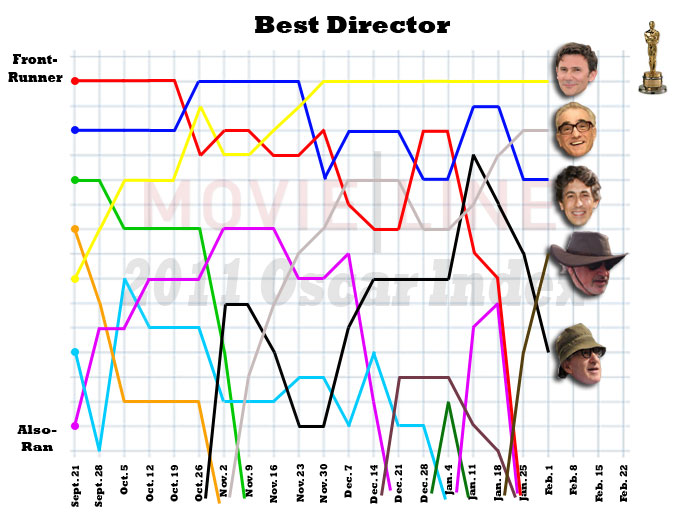 And that's not all! Check out what Madge said about Terrence Malick: "He really does make the movie he wants to make. It’s completely and utterly authentic. And I feel like he really is channeling something without anybody else’s input. No one’s saying he should do that, he shouldn’t do that. He gets amazing performances out of his actors."

Enh, really I've got nothing here beyond the DGA Awards usual. Hazanavicius is either the utmost symbol of his film's imminent supremacy or the last high-voltage blast of Artist glory you'll see before The Help pulls its plug. I lean toward the former, but imagining Malick getting up onstage at the Kodak Theater and quietly asking the producers to "Please turn that clock off; this will take a few hours" is a dream worth savoring. 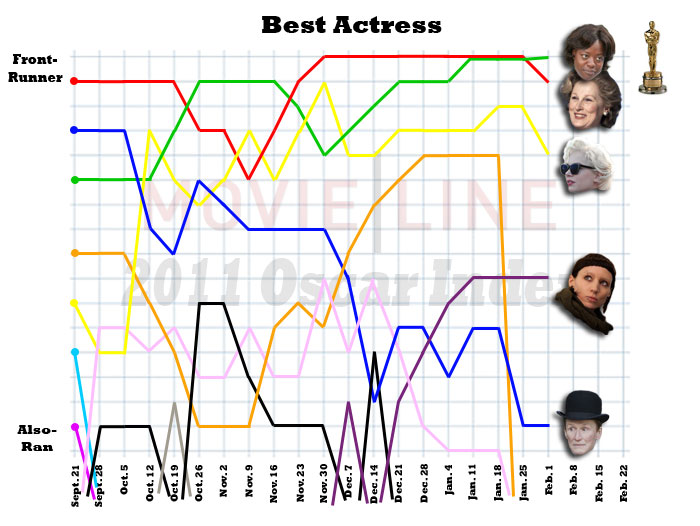 I don't have much to add about Davis that wasn't either covered above or elucidated in Nathaniel Rogers's exquisite tribute this week at The Film Experience:

I think the true indicator that Viola Davis is the likely winner of the Best Actress Oscar is not the win itself with SAG, which has a much wider more diverse voting body than Oscar, but the crowd response. Reducing co-stars to tears is probably no great achievement. They were in the trenches with you, so naturally Jessica Chastain, Octavia Spencer and Cicely Tyson were crying their eyes out. But making Zoe Saldana and Angelina Jolie all misty? Boosting Dick Van Dyke's mood when he was already high on life?

I think what it comes down to is the unruly power of emotion, or "heart" as its sometimes called in movie parlance and awards narratives. The heart wants what it wants and for a lot of people, that means Viola Davis in The Help this season.

There's more where that came from. I recommend it -- as well as takes from Kristopher Tapley (at Davis's Santa Barbara Film Festival appearance), Jimi Izrael ("There are flaws in the film, but Viola Davis is not one of them") and Ryan Adams, who had the definitive reaction to Davis's extraordinary SAG acceptance speech: "Anyone who thinks I’m wrong to be angry about a sneering attitude toward this speech, come at me, bro. Come at me." That's OK! 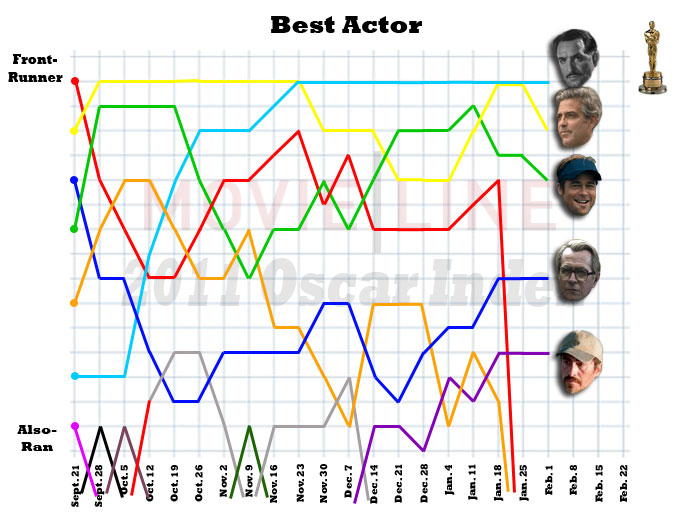 I mentioned this the other day, but to those awards-watchers who only this week came around to Dujardin as the favorite in Actor: Where have you been for two months? I mean, yes: Clooney was great at the Golden Globes, but Dujardin was great in his movie. And anyway, studs don't win Oscars! (No offense to Dujardin. Ahem.) 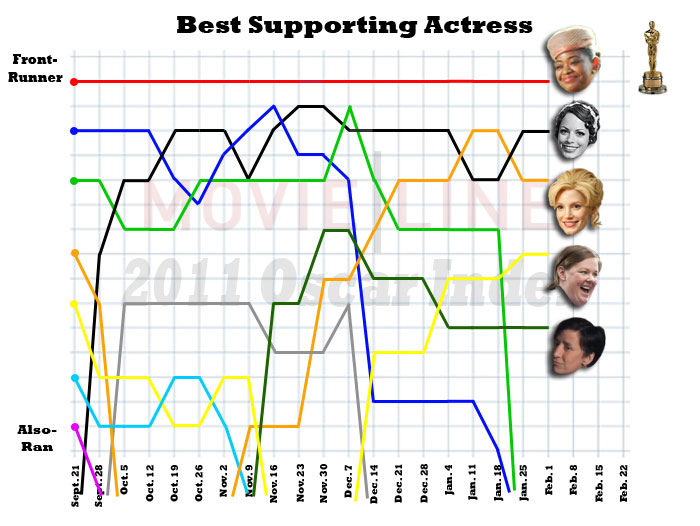 In a terrific breakdown of the Supporting Actress contenders, Guy Lodge says it best about the Race That Never Was:

For playing the stroppiest character with the tangiest individual narrative in the generous female ensemble of The Help -- there are dramatic opportunities aplenty for her co-stars, but only she gets to say, "Eat my shit," and mean it -- Octavia Spencer has been the default favorite in this category since August. While I kept expecting someone to overtake her in the intervening months, the Critics' Choice and Golden Globe Awards proved that no one is tiring of the long-toiling character actress's onscreen 'tude and offscreen charm, and I see little reason why SAG and the Academy won't follow suit. A second viewing of the film revealed nervy dramatic subtleties to her work beyond the irresistible shit-pie punchline, and she benefits from having fellow nominees Viola Davis and Jessica Chastain as scene partners throughout. If the year's highest-grossing Best Picture nominee is rewarded in only one place, it'll be here. 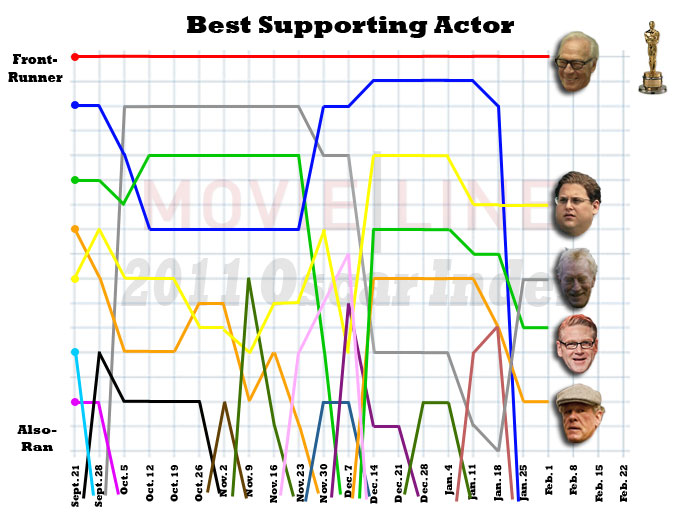 Is anyone else missing Albert Brooks right about now? Can't we get Max von Sydow or Nick Nolte to break off some snappy, self-effacing rejoinders on Twitter? Fine, forget it.