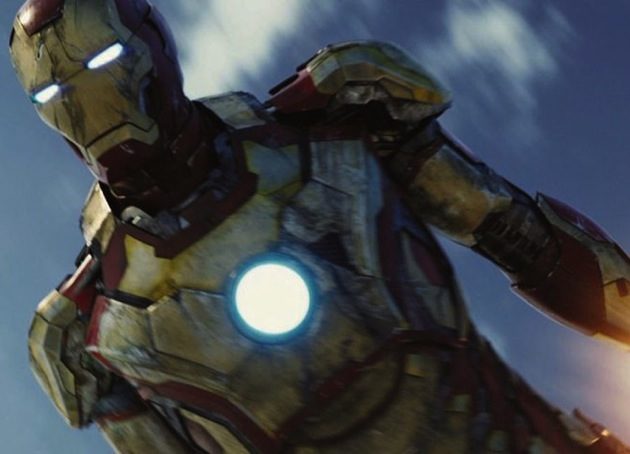 Iron Man 3 screened in Times Square last night, and though it's practically impossible to talk about the Mandarin without spoilers, I've got to say that he is the most daring creation of the Marvel Cinematic Universe so far. As Ben Kingsley, who portrays the villain, said again and again and again in the trailers, "You will never see me coming," and that line resonates even more now that I've seen the movie.

Director Shane Black, who also co-wrote the movie with Drew Pearce, created a character that took me completely (and happily) by surprise. And, after all that blogosphere grousing — myself included — about casting the half-British, half-Indian Kingsley in the role of a character that, based on the Marvel comics universe,  is a China-born descendant of Ghengis Khan, the Oscar-winning actor turns out be a genius bit of casting. There's only one other actor I could imagine doing justice to the part, but I'm going to hold off on sharing his name for now for fear that his body of work would be too much of a clue.  Maybe I'll drop it in the comments section after the picture opens.

I have a feeling Black and Pearce's construct for the Mandarin is going to piss off a lot of comic-book purists (while, at the same time, making die-hard fans of The X Files smile),  but I applaud them and Marvel Studios for taking the chance. The Mandarin turns out to be a villain for the media-saturated, perception-is-reality 21st Century, and that's a lot more memorable (and unsettling) than some dude with magic rings.  I wish I could write more about this, but that's about as far as I can go without spoiling a key chunk of the movie.

What did I think of Iron Man 3 overall?   I liked it, but it didn't blow me away. In part, I wish that Marvel, Pearce and Black had taken even more chances with the movie.  In addition to the Mandarin storyline, Gwyneth Paltrow's Pepper Potts character gets an interesting subplot, but the movie's ending left me with the distinct impression that  Marvel is so concerned about messing with the success of the Iron Man franchise that it waffled on really exploring the possibilities.

There's another factor, too, that is largely personal. My enjoyment of digital effects laden superhero movies is approaching its saturation point. Despite being one of those scrawny, bespectacled geeks who came of age poring over The Amazing Spider-Man and Deathlok The Demolisher,  I've reached a point in life where movies about human struggles are vastly more engrossing than superhuman ones.

Downey and the Iron Man franchise remains my favorite of the genre because the actor brings so much humanity and wit to his character, and so, besides the surprising Mandarin reveal, I was grateful for the subplot involving Tony Stark's mostly unsentimental relationship with a wisecracking Tennessee boy named Harley (Ty Simpkins) whose aid he enlists. My favorite line from the movie, which evoked a mixture of gasps and laughs from the audience, came when Harley reveals his fatherless existence to Stark.  "Dads leave," Downey replies. No need to be a pussy about it."  I'll remember that line long after the action sequences have faded.

The Problem With Trailers

And they are already fading. Let's just say that an army of Iron Men is cool to behold, but it does not necessarily make for better action sequences. But what does? The first effects-rendered action sequence that has turned my head in a long time is the scene from the most recent Pacific Rim trailer in which a Jaeger robot uses an oil tanker as a Louisville Slugger to bash in the skull of a Kaiju.   Speaking of trailers, they diminish the impact of some of the best action sequences in Iron Man 3 (and other tentpole movies) because they reveal too much play for months before a movie's release.

By the way, I think most moviegoers will disagree with my assessment of Iron Man 3 based on the reactions of the crowd that saw the movie with me.  The 3D glasses that were being passed out came in a number of collector's variants, and entering the theater, I encountered a scrum of moviegoers jostling each other to get a particular version.  During the movie, the crowd's reaction was enthusiastic and, after watching the disappointing post-credits scene with Mark Ruffalo as the Hulk's alter ego Bruce Banner, I heard a middle-aged woman excitedly telling someone on the other end of her cell phone, "I can't wait to see it again."

If you've seen Iron Man 3, let me know what you think in the comments section.

Iron Woman? If Pepper Potts Has A Future In Armor, She Needs To Kick Villain Ass