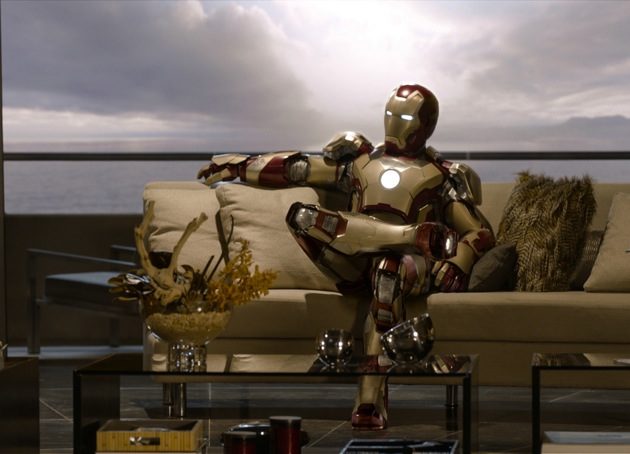 The third time is neither a particular charm nor the kiss of death for Marvel Studios’ robust Iron Man series, which has changed studios (from Paramount to Disney) and directors (Shane Black subbing for Jon Favreau) but otherwise toyed little with the formula that has so far generated more than $1.2 billion in global ticket sales. The inevitable franchise fatigue ― plus a markedly unmemorable villain ― may account for the feeling that Iron Man 3 is more perfunctory and workmanlike than its two predecessors, but this solid production still delivers more than enough of what fans expect to earn its weight in box office metal.

Part of the rich appeal of the first Iron Man (2008) came from the inspired casting of Robert Downey Jr., who brought loads of impish charisma and insouciance to the part of defense contractor turned iron-plated superhero Tony Stark. It was particularly fun to watch Downey becoming Iron Man, bobbing and weaving about in his space-age rocket suit like a novice surfer trying to stand up on a wave. You can only do an origin story once, alas, and some of the magic was already gone from 2010’s Iron Man 2, which pitted our hero against a stock Russian heavy (Mickey Rourke) in a standard-issue revenge narrative, but still found ample time for Stark and romantic foil Pepper Potts (Gwyneth Paltrow) to do their very passable Tracy-Hepburn routine. There was also a sly running commentary on the celebrification of American culture ― and, in Stark’s effort to rid himself of the shrapnel slowly poisoning his body, a deft analog for Downey’s own widely publicized battle with various forms of addiction.

Most of that is absent at the start of Iron Man 3, which finds Stark in fine physical shape ― if a bit mentally unhinged from the events of The Avengers ― and living in relative domestic bliss with the comely Ms. Potts. All of which leaves little for Black (and co-screenwriter Drew Pearce) to do other than summon up the latest villain from the Marvel dugout: A bearded, bin Laden-esque baddie who calls himself the Mandarin (Ben Kingsley) and who claims credit for a series of terror bombings, one of which, a frightening attack in front of Hollywood’s historic Chinese Theatre, has landed Stark security honcho Happy (Favreau) in a coma. (Although clearly unintentional, the movie’s recurring images of severed limbs and burning bodies can’t help but strike a queasy note in light of the recent events in Boston.) Spewing his boilerplate anti-American rhetoric in a series of crudely made videos that mysteriously jam the television airwaves, the Mandarin promises that “the big one is coming,” just in time for Christmas no less.

If we’ve learned anything from fantasy villains ranging from Darth Vader to the Dark Knight trilogy’s Ra’s al Ghul, first appearances can be deceiving. Suffice to say that the Mandarin is in some kind of cahoots with a couple of blasts from Tony Stark’s past: an experimental botanist (Rebecca Hall) and her wealthy benefactor, Aldrich Killian (Guy Pearce), whose prize project, Extremis, involves “hacking” into the human DNA chain to cure the sick, heal the lame and pretty much do anything else you might desire. Upon hearing Killian’s pitch, Pepper notes that the technology sounds like it could easily be weaponized. She doesn’t know the half of it.

As an A-list screenwriter in the ’80s and ’90s, Black practically defined a certain brand of sardonic Hollywood action spectacle (his credits include Lethal Weapon, The Last Boy Scout and The Long Kiss Goodnight), then disappeared for most of the 2000s, surfacing briefly in 2005 with his directorial debut, the self-referential neo-noir Kiss Kiss Bang Bang (which featured Downey in a crucial comeback role). Iron Man 3 reps a huge step up in terms of scale, and Black largely acquits himself well, keeping the pace brisk, deploying a couple of modest surprises and staging a few undeniably impressive, super-sized setpieces. Among them: an end-of-first-act raid that reduces Stark’s swank Malibu pad to smithereens, and a mid-film, mid-air rescue that draws upon some truly spectacular skydiving acrobatics.

The entire package is never less than professional, enhanced by ace tech contributions from cinematographer John Toll, production designer Bill Brzeski (replacing the late J. Michael Riva) and editors Peter Ford and Jeffrey S. Elliot. Yet the movie suffers from separating Downey from three of his best verbal sparring partners ― Favreau, Paltrow and Paul Bettany (as the voice of the uber-computer Jarvis) ― for much of the pic’s running time. And from top to bottom, Favreau’s handcrafted touch is conspicuously absent, particularly his affection for retro, Ray Harryhausen-esque visual effects. (This is by far the most digital-looking series entry.) Perhaps fittingly for a movie that introduces a new generation of remote-guided Iron Man suits, Iron Man 3 all too often feels as if it were assembled by a machine.

Though advertised as Iron Man 3 in all promotional materials, the pic’s full onscreen title reads as Iron Man Three.