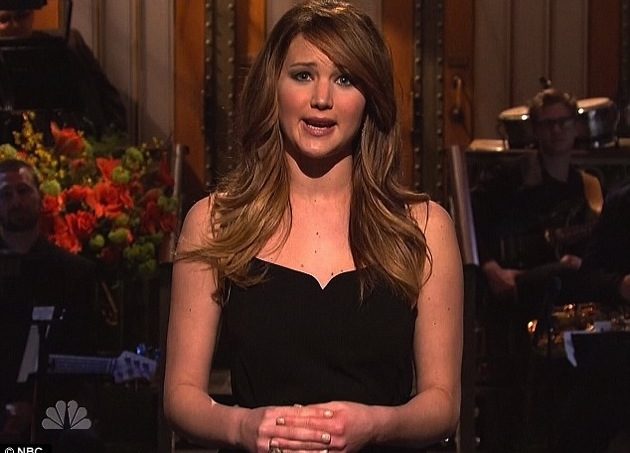 If you need an idea of how intensely competitive Oscar campaigning has become, look no further than Jennifer Lawrence's opening monologue for Saturday Night Live. Given the ridiculous media tempest that arose from Lawrence's First Wives Club "I beat Meryl Streep" reference at the Golden Globe Awards, I figured that the show's writers were going to address the issue in Lawrence's opening segment. And they did — in such a half-hearted way that it sounds like some negotiating went on to make sure that the Silver Linings Playbook star and Best Actress nominee didn't say anything that would hurt her chances to bring home a statuette. The monologue started out in promising fashion. The Tommy Lee Jones stuff was genuinely funny and Bill Hader's Tommy Shuffle deserves to become a genuine dance move. And then, when Lawrence told her fellow nominees, "Ladies, I love you all, but you're about to get served," I thought, for a few seconds at least, that the Silver Linings Playbook actress was going to earn her comedy warrior stripes by playfully dissing her competition and sending up the whole Golden Globes controversy.

It started out that way, at least. Here's how Lawrence began:

"Well, well, well, look who it is. Jessica Chastain. More like Jessica Chas-ain't winnin' no Oscar on my watch!  In Zero Dark Thirty, you caught bin Laden. So what?  In Winter's Bone, I caught a squirrel — and then I  ate it. Boom! Deal with that."

And then — boom! — Lawrence pulled her punchline, so to speak.  This is how she ended:

"Also every time I see you act, I learn something new."

She did the same thing with each of the nominees, needling them gently in a way that only an idiot could misinterpret, and ending on a cringe-worthy note of praise.  That's not comedy. That's Oscar campaign politics making sure that any witless television viewers and bloggers tuning in won't mistake Lawrence's monologue for genuine trash-talking and start up a whole new controversy that could hurt her chances with Academy voters.

Here's the thing. After watching the clip below several times, I'm left with the impression that Lawrence, who has proven herself to be quite candid in interviews, wasn't exactly committed to the flip-floppy nature of the monologue script.  The stilted and hurried way she delivers that that line of praise for Chastain off her cue card suggests she is deli something unfamiliar, or, perhaps even unsavory to her. Is that the subtle protest of an actress who doesn't like the material she's been given to read, but is too much of a pro to go rogue on an Oscar campaign on which many man hours and dollars have been spent?

Judging from the comedic instincts Lawrence showed during the rest of her SNL performance, I say yes.

What do you think?