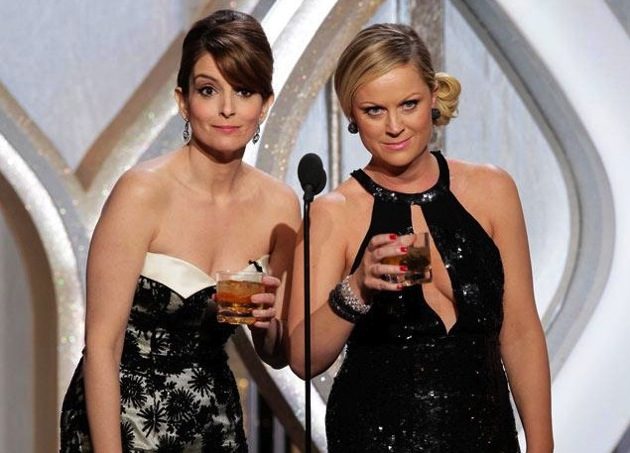 Aspiring awards-show hosts, do I have a training video for you.  Here, in one sweet video-clip compilation, is a highlight reel of Tina Fey and Amy Poehler's pitch-perfect performance at the Golden Globe Awards on Sunday. Included are Poehler's lines about the "beautiful people of film rubbing shoulders with the rat-faced people of television," Les Miserables actress Anne Hathaway not being cut out for porn, and  Fey's warning to singer/songwriter Taylor Swift to "stay away from Michael J. Fox's son," Sam.    This nicely edited clip, which was posted by The Guardian in the U.K.,  also features audience reaction to the jokes.  You get to see Jessica Chastain's gasp after  Poehler does the joke about Zero Dark Thirty director Kathryn Bigelow understanding torture because of her three-year marriage to James Cameron. And Daniel Day-Lewis plays along by extending his index finger when Poehler and Fey tell the audience that the method actor actually worked for Steven Spielberg before Lincoln when he played E.T.  There's even a bonus shot of Tommy Lee Jones scowling, which makes this video a must-have for any awards-show aficionado's collection.  My only regret is that the video doesn't include the shot of Poehler cuddling with George Clooney.  Check it out below, but put down the coffee cup first or you'll be doing a spit take like Quentin Tarantino.