With two weeks to go until Christopher Nolan's The Dark Knight Rises hits theaters, Warner Bros. has made available nearly 50 pages of detailed production notes online that offer behind-the-scenes tidbits on character, plot, costume design, the crazy practical stunts Nolan & Co. pulled off, Batman's new toys, and some of the new faces joining the trilogy. The question is, how much do you want to know? (Bonus: Get the new IMAX poster after the jump!)

Given TDKR's set-up — it takes place eight years after the events of The Dark Knight, with Batman in semi-retirement/hiding — and the two new adversaries joining Bruce Wayne/Batman straight from the pages of the comics (i.e. supervillain Bane and super-minx Selina Kyle/Catwoman), some of this is already familiar to Bat-fans. And while the production note dossier includes only a few semi-spoilery details on certain scenes and characters, unless you're committed to going into TDKR with as pure and spoiler-free a mind as possible, the doc is fairly safe to peruse, and chock full of geeky details.

[BEWARE SPOILERS! WHO KNOWS WHAT YOUR VIRGIN BAT-EYES WILL DISCOVER!]

On Gordon, who's now wrestled with Batman's secret for eight years:

"Gary Oldman returns to the role of Gotham City’s top cop, Commissioner Gordon, who withheld the truth of Harvey Dent’s demise at great personal cost. 'He respects Batman’s sacrifice, but allowing the citizens of Gotham to be fed a lie goes against everything that Gordon believes in,' the actor says."

“...to a certain extent, Gordon was more useful to the political leaders of Gotham when the city was overrun by organized crime,” Nolan points out. “Now that is under control, so there are people eyeing his job, presuming he’s no longer needed. But Gordon has been struggling with the fact that all of this is based on a false foundation.”

“It’s a secret that’s eaten away at him for years,” confirms Gary Oldman. “Crime is at an all-time low in Gotham, but Gordon knows that it’s tainted. Now he’s ready to come clean, but there doesn’t seem to be a right time or place, and he also questions if the city is ready for the truth. Then, because of Bane, he’s in the field again. I think he’s like a soldier who likes to be on the front lines, getting his hands dirty. He’s probably been doing a lot of paper pushing in the intervening years and that has dampened his spirits. Now you really feel like the old Gordon is back.”

Gordon finds a new protégé in policeman John Blake, whose devotion to the job impresses his boss. Emma Thomas says, “Gordon definitely sees something of himself as a young cop in John Blake. Everyone else seems to have lost focus because things have been so good, but Blake is the first to realize that something’s up, and Gordon recognizes those instincts by promoting him and putting him on his team.”

Describing his role, Joseph Gordon-Levitt says, “John Blake is the kind of guy who probably always wanted to be a cop and dedicates himself to being excellent at his job. He is someone who believes in what he does and I admire that in anybody. In the midst of a lot of cynicism, he remains proud to be a police officer.”

Nolan comments, “Commissioner Gordon and Bruce Wayne have become somewhat jaded, so we wanted to contrast that with a younger, more idealistic individual who, in a way, represents where they’ve come from. Joe really captured the strength and courage of a man who refuses to back down, regardless of the odds.”

The character of Miranda Tate can also relate to Bruce, albeit from a place of affluence. Cast in the role, Marion Cotillard notes, “They both have a lot of money and are trying to use it in a good way, so they understand each other right away.” Bale agrees. “Miranda is somebody who is encouraging Bruce to use his resources for the betterment of Gotham through an environmental project. She is beautiful, smart and altruistic, and all the good that she aspires to earns his respect and also intrigues him a great deal.”

A member of the board of Wayne Enterprises, Miranda’s affluence makes her a vital ally to Bruce when the company becomes the target of a hostile takeover. On a more personal level, Nolan says, “She is looked at by Alfred and Lucius as a woman who could perhaps bring Bruce out of his own exile and remind him that there is more to life than sitting alone in the Batcave.

On Bane and his dastardly terrorist plans for Gotham City:

While the Scarecrow was a madman and the Joker an anarchist, “Bane is a terrorist in both his mentality and his actions,” says actor Tom Hardy, who plays Batman’s new arch-nemesis. “He is physically intimidating and he’s also very intelligent, which makes him even more dangerous.”

Nolan relates, “In deciding on who the next villain would be, it was imperative that it was someone completely different from the Joker—that he be a brute force. The physical component of what Bruce Wayne does as Batman is of extraordinary importance, and we had not truly challenged that in the first two films. I really wanted to see Batman meet his match physically, as well as intellectually. Bane is raw strength with a fanatical devotion to duty, and that combination makes him unstoppable.”

And finally, the newly unveiled IMAX poster for TDKR. It's gorgeous in a painterly way, and in contrast to previous posters and promo images for the film, presents the Bat-sign in the sky as signaling a break in the clouds from all that chaos reigning down on Gotham City. Batman stands triumphant once more above his city shining his light through all the debris of Bane's fiery terror, and stuff. Nice. 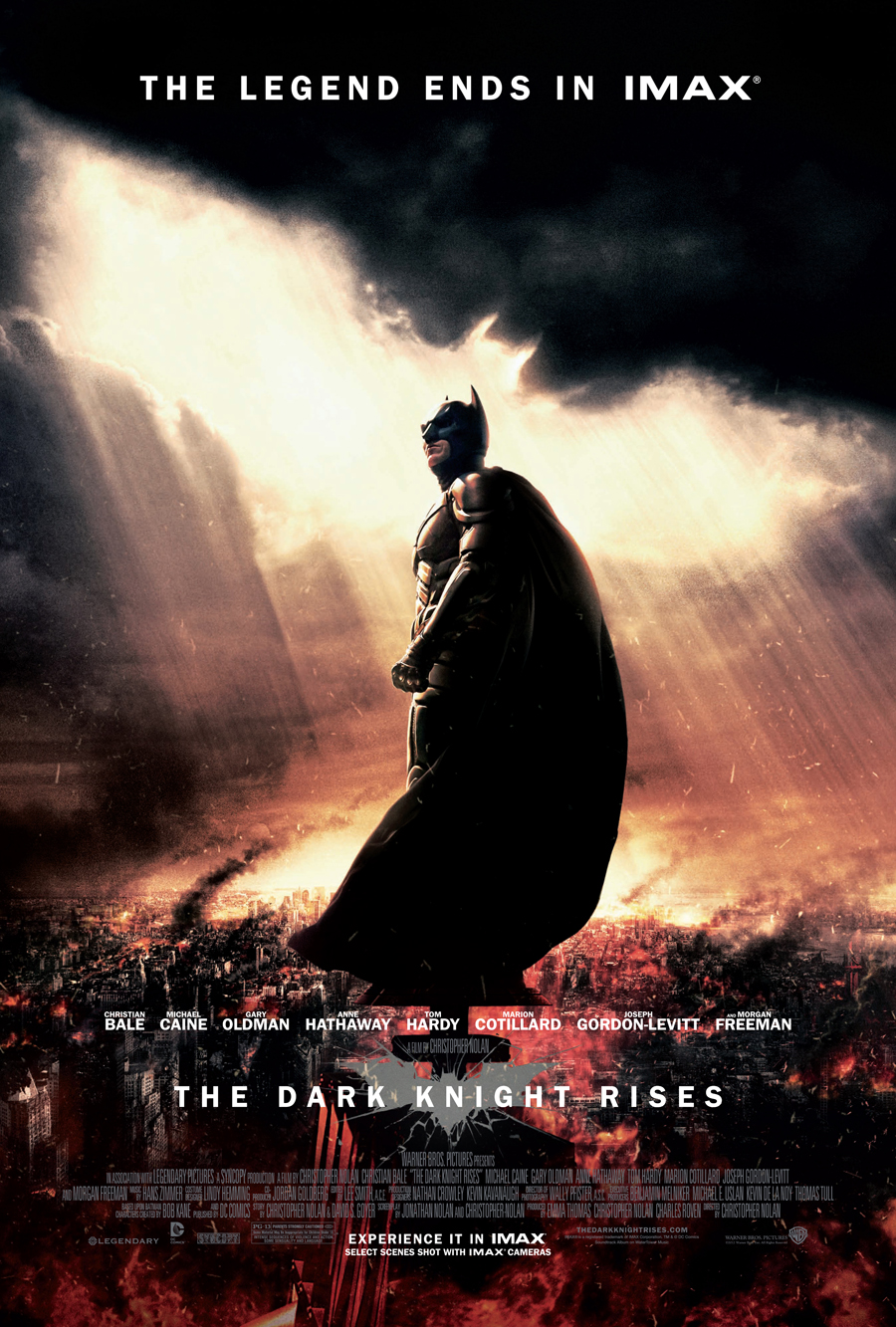 What do you make of these 50 pages of Bat-tidbits? (Did you cave in to curiosity?) Chime in below with your thoughts on the highly anticipated sequel.