How Samuel L. Jackson Did His Grindhouse Homework for Quentin Tarantino's Django Unchained 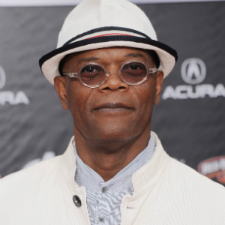 When Quentin Tarantino's Django Unchained hits theaters in December, it'll bring audiences face to face with a flurry of new grindhouse/genre references and influences, as any Tarantino flick is wont to do. Among those citations is the Italian exploitation pic Goodbye Uncle Tom (AKA Addio Zio Tom/Farewell Uncle Tom), the notorious 1971 pseudo-doc about a film crew documenting the horrors of slavery in the American south, which Django Unchained cast member Samuel L. Jackson discussed recently during an interview for his superhero flick The Avengers (a movie that does not, by the way, pay homage to questionably exploitative slavery explorations.)

In a video interview with The Hollywood Reporter, Jackson was asked about the film's influences. "Quentin pays homage to a lot of different genres, and he would like to say this is a spaghetti Western -- and I guess in ways it is," said Jackson of Django Unchained, in which he plays a character described as a "house slave."

[GALLERY: The cast of Django Unchained assembles in Mexico]

Jackson says he watched Goodbye Uncle Tom and other similar exploitation pics, including 1975's Mandingo, which addressed slavery-centric themes. "It's his take on those films, but it's not like it's not part of the fabric of this country, and it happened. We'll deal with it as honestly and as Tarantino-esque as we can."

One of the great effects of Tarantino's films is how they introduce mainstream audiences (at least, his segment of the mainstream audience) to the world of genre/exploitation/grindhouse cinema. When it comes to the topic of race in film, movies don't get much more cringe-inducing than Goodbye Uncle Tom. (Fun fact: Riz Ortolani's love theme from the pic was used in Nicolas Winding Refn's Drive last year, which I've written about here before and will continue to do because I love taking every chance I get to bring up Goodbye Uncle Tom.)

Anyway, my anticipation couldn't be higher for Django Unchained. Kudos to THR for bringing up something like Goodbye Uncle Tom at the Avengers junket, of all places.

The official synopsis for Django Unchained:

Set in the South two years before the Civil War, DJANGO UNCHAINED stars Academy Award®-winner Jamie Foxx as Django, a slave whose brutal history with his former owners lands him face-to-face with German-born bounty hunter Dr. King Schultz (Academy Award®-winner Christoph Waltz).  Schultz is on the trail of the murderous Brittle brothers, and only Django can lead him to his bounty.  The unorthodox Schultz acquires Django with a promise to free him upon the capture of the Brittles - dead or alive.

Success leads Schultz to free Django, though the two men choose not to go their separate ways.  Instead, Schultz seeks out the South's most wanted criminals with Django by his side.  Honing vital hunting skills, Django remains focused on one goal: finding and rescuing Broomhilda (Kerry Washington), the wife he lost to the slave trade long ago.

Django and Schultz's search ultimately leads them to Calvin Candie (Academy Award®-nominee Leonardo DiCaprio), the proprietor of "Candyland," an infamous plantation where slaves are groomed by trainer Ace Woody (Kurt Russell) to battle each other for sport.  Exploring the compound under false pretenses, Django and Schultz arouse the suspicion of Stephen (Academy Award®-nominee Samuel L. Jackson), Candie's trusted house slave.  Their moves are marked, and a treacherous organization closes in on them.  If Django and Schultz are to escape with Broomhilda, they must choose between independence and solidarity, between sacrifice and survival...