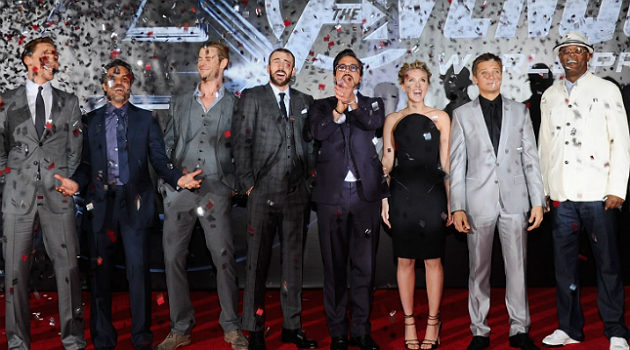 The cast of Marvel’s The Avengers were a spirited bunch Thursday in Beverly Hills, where the familial vibe amongst the likes of Robert Downey Jr., Samuel Jackson, Chris Hemsworth, Chris Evans, and Mark Ruffalo was evident and mutual admiration, inside jokes, and startling revelations abounded. (Scarlett Johansson, alas, was absent due to a scheduling conflict.) Among the highlights: Ruffalo’s youthful Hulk inspiration, Jeremy Renner’s suggestive Hawkeye imagery (“[I] played with Thor’s hammer while he stroked my bow”), and one mysterious, maybe-still legit admission from Downey that the assembled Avengers would be filming a scene… that night. But, pray tell: Which Avenger possesses the best Dance Dance Revolution skills? SPOILERS AHEAD.

JEREMY RENNER SETS THE FIRES OF A THOUSAND SLASHFICS AFLAME:
The erstwhile Hawkeye described his favorite memory from set. "Getting to play with Thor’s hammer while he stroked my bow. Oh, here we go. That’s gonna get me in trouble." Hawkeye + Thor 4 eva?

HOW MARK RUFFALO "GOT" THE HULK:
Watching the Bill Bixby Incredible Hulk TV show with his 10-year-old son on Joss Whedon's recommendation, Ruffalo found his way into the character. "After the third episode he turned to me and said, 'Papa, he’s so misunderstood!' I basically based my character entirely on my 10-year-old boy, who has all of the force of nature screaming out of his body while at the same time having everyone around him telling him to fucking control himself."

ANOTHER LESSON RUFFALO LEARNED EARLY ON: AVOID THE INTERNET.
"It was terrifying. I knew what my responsibility was, or I felt it just by going online and reading some of the fanboy responses to the announcement that I was playing the next version of Bruce Banner. That was a mistake. I will never do it again. I’ve never had a role more scrutinized and criticized before I’d shot a single frame."

CODE NAME: GROUP HUG -- AVENGERS LOVE ON AND OFF SET
"Tom [Hiddleston] loves hugs," said Hemsworth. "I did a film with him and there were plenty of hugs in that film... Chris [Evans] sent texts that said 'The Avengers assemble at such and such bar, 9 o’clock Saturday night.' That was a good group effort. [Pause] We paid for it at work the next couple of days."

Ruffalo: "You should see that group hug."

Downey Jr.: "Ruffalo, weren’t you the one throwing the roof parties?"

Downey Jr.: "So you were the group instigator."

Ruffalo: "I was the group hugger." And then: "I just remember coming into someone’s place with a group of half-naked stuntmen in a hot tub and Scarlett Johansson standing over them with a giant ladle…making boy soup."

CHRIS HEMSWORTH ON USING HIS REAL LIFE SIBLINGS TO TAP INTO THE THOR/LOKI RELATIONSHIP:
"The last time either one of my brothers tried to take over the world or the universe, I had to think about how did I feel," Hemsworth joked.

To wit, Downey Jr.: "Don’t you feel that Liam is trying to take over your box office universe? Doesn’t he need to be corrected in some way?"

WHY JOSS WHEDON WAS THE IDEAL DIRECTOR FOR THE AVENGERS:
"The only fear I had was that the whole thing would collapse under its own weight," admitted Marvel Studios' Kevin Feige. "My biggest interest in The Avengers is the interaction between these people, and looking at Joss’s body of work, the scripts that he’s written and TV shows, the characters never ever get lost. In fact those are the moments that shine. That was, to me, why he was the best person to mount this."

For Downey Jr., it was while watching one moment in Act Three when he felt the relief and elation of knowing Whedon's vision worked. "I speak to Joss’s wit, whether the wit is funny or whether the wit is actually being able to hold the myriad of ideas and notions that you have to get right for Avengers not to be bunk. [That's] what he accomplished."

SAM JACKSON SUMS UP THE AVENGERS:
"He’s the rich, smart ass guy; he’s the little guy with the big words that might turn and fuck you up at any moment, you never know when that is – and he’s trying to make him do it, the bad little brother… it was a great time doing that and being able to be in that space and allowing an audience to see that these guys have superpowers but they have normal guy attitudes. They get pissed with each other and they argue about petty shit, you know. They can be smart asses and they can be heroes and they can just be jerks, but eventually they’re going to love each other."

WHEDON ON HIS BIGGEST CHALLENGE:
"The hardest part is and always will be structure; how do you put that together? How do you make everybody shine? How do you let the audience’s identification drift from person to person without making them feel like you’re not involved. It’s a very complex structure – it’s not particularly ornate or original but it had to be right, it had to be earned from moment to moment, and that was exhausting."

"You see things like The League of Extraordinary Gentlemen where they just throw out the comic, or Watchmen where they do it frame for frame, and neither of them work. You have to give the spirit of the thing and then step away from that and create something cinematic and new."

WHICH ALIEN RACE ARE THE BADDIES IN THE AVENGERS, EXACTLY?
SPOILERS, obviously: Whedon set the record straight, since the film doesn't explicitly explain just who is helping Loki in his attempt at world domination. "The alien race are the Chitauri -- or a version of them -- because they are not one of the key races and they don’t have a storied history. That wasn’t the point. I know this debate will go on long after I’m dead. I would say it was the Kree-Skrull race."

AGENT COULSON WEARS DOLCE & GABBANA
His portrayer, Clark Gregg, was initially skeptical that an Avengers movie could be pulled off. Then he got the script. "I felt like this was not an achievable task, as someone who writes sometimes and loves movies and watches a lot of them, I just didn’t think it was feasible to have this many characters and have them all get to move forward and have the story of them coming together really work. If it did work with that many amazing superheroes and movie stars, I felt it unlikely that Agent Coulson would do anything other than bring some super coffee to somebody. So when I read it and saw that it was my fanboy wet dream of an Avengers script and that Agent Coulson was a big part of it, that was the great day for me. I just drove around the streets with the script in the other seat kind of giggling."

AVENGERS VS. JUSTICE LEAGUE, DC COMICS VS. MARVEL:
What would Whedon say to Warner Bros. regarding their attempts to make a similar multi-superhero franchise out of The Justice League? "Call me," he joked, before astutely addressing WB/DC's uphill battle. "It’s enormously difficult to take disparate characters and make them work – and DC has a harder time of it than Marvel because their characters are from a bygone era when their characters were bigger than we were, and they’ve amended that but Marvel really cracked the code in terms of [superheroes] are just like us. So a dose of that veracity that Marvel really started with Iron Man. I think you need to use that as your base."

YEP, THE AVENGERS PLAY DANCE DANCE REVOLUTION
The Avengers cast was known to bust a few moves playing Dance Dance Revolution at Jeremy Renner's house. "I don’t know the last video game I played apart from DDR at Jeremy’s house... Scarlett and I will always have “Billie Jean,” said Hiddleston.

"I have friends, so..." Whedon responded.

You'll find out which Avenger had the best DDR skills in Movieline's upcoming interview with Ruffalo, but I'll leave you with this hint: It was a tie.

AND FINALLY, IS THE AVENGERS STILL BEING SHOT??
Downey Jr. closed his press conference with the stunning reveal that the Avengers cast was filming one last scene Thursday night. "Not to keep you guessing, but we’re actually not done shooting. We are shooting one more scene… tonight. Not kidding. [Pause] No more questions!"

Speculation is that it would be a final bonus post-credits scene to be added to the end of the version that screened at the Avengers world premiere, just in time for release, in addition to an already existing credits scene that is indeed in the version press saw this week. Whedon, asked to clarify, insisted that Downey Jr. was just joking -- "He’s Robert – of course he’s kidding," he said -- but Ruffalo confirmed as much, according to The Playlist.

Word on the street is that RDJ was, in fact, not pulling our legs. We'll find out soon enough who was telling the truth, as The Avengers flies into theaters May 4.