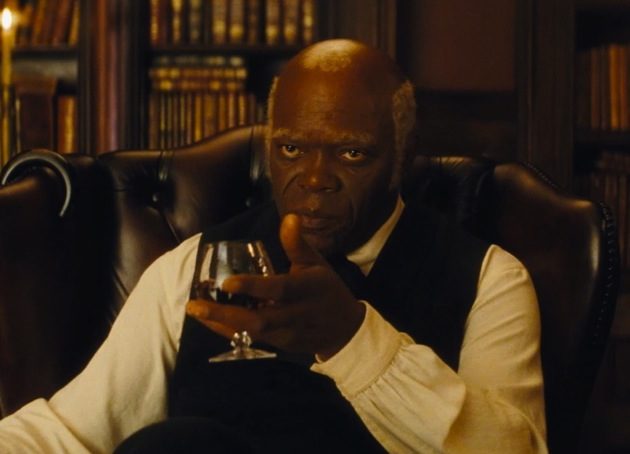 Samuel L. Jackson has created, as he put it,  "the most reprehensible negro in cinema history," with his portrayal of Stephen, the slave who runs Calvin Candie's (Leonardo DiCaprio) Candyland plantation in Django Unchained.  But, the actor  told Movieline that he's even more despicable in scenes that were cut from the final print of Quentin Tarantino's spaghetti southern.

Jackson's character treats his fellow slaves with great cruelty  as runs his master's plantation with an iron fist and a calculating intellect. "I am the power behind the throne ...the Spook Cheney of Candyland," Jackson said of his role at a jammed press conference for the movie on Sunday morning that included Tarantino, Jamie Foxx, Kerry Washington, Christoph Waltz, DiCaprio, Don Johnson, Walton Goggins and Jonah Hill, despite that last actor's miniscule cameo as a Klansman identified only as "Bag Head #2.".

Jackson's sinister performance is one of the artistic high points of the movie and will have cineastes dissecting the complexity of his character for a long time to come.

And if Tarantino decides to release a director's cut of Django Unchained, there will be much more to discuss.

In an interview with Jackson that will run in its entirety later this week, the actor told me, "There are scenes we shot that aren't in the movie in which I do some things that are way more reprehensible than the things you actually see on screen."

Without getting too spoilery here, Jackson explained that a pivotal scene in which Django is captured originally ran much longer and involved Stephen torturing Foxx's character.

"I burn his nipples off with a hot poker.  I do all kinds of  shit to him in that scene that would have just made people go Ahhhhh!"  said Jackson, squirming in his seat for effect. (Tarantino may finally have shot a sequence more horrific than the ear removal sequence in Reservoir Dogs.)

He added that the hot poker scene amounts to payback for another, earlier scene that was also cut from the movie in which Stephen and Django (Jamie Foxx) have a physical altercation upon the latter character's arrival at Candyland.  Although the tension between Django and Stephen is palpable in the final cut of the movie, Jackson said it underscored the two characters enmity for each other.

Jackson also told me that the excised torture scene was his favorite of the movie, in part, because he got to explain to Django, "I'm doing this because you put your hands on me."

Although there's no shortage of bloody brutality in the cut of Django Unchained that will open in theaters on Christmas Day, Tarantino explained that the scenes he cut  would add a lot to the plot and in some ways change the story. Though he said, "I wouldn't be surprised if I did" eventually release a director's cut of the movie, "I want this to be the story for a while."