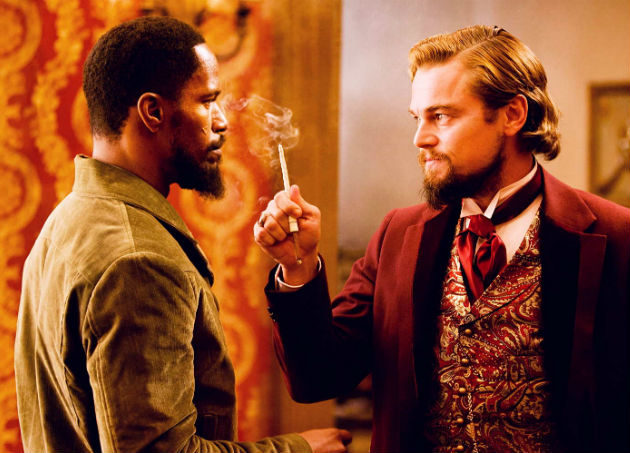 Quentin Tarantino continues his quest to fight history's great oppressors by way of the movies in Django Unchained. Inglourious Basterds conjured up a squadron of tough Jewish-American soldiers who took Nazi scalps and chased down Hitler with the help of a French Jewish theater owner, a British film critic turned lieutenant and a Allies-affiliated German movie star. Django Unchained doesn't literally bring the forces of cinema to bear against slavery in the same fashion, but it does use tropes of Spaghetti Westerns and exploitation films to build the character of a former slave who learns to shoot and eventually faces down the residents of a plantation in order to retrieve his wife. There's something inarguably rousing about Tarantino's exuberant revisionist history, about the way he rewrites wretched eras in the past so that those who suffered are able to have their bloody revenge.

And yet, Django Unchained and Inglourious Basterds are my two least favorite works in Tarantino's oeuvre, not because of their concepts but because of their expansive, unhurriedly indulgent qualities. Don't get me wrong — he's still able to offer up scenes set to music that are the cinematic equivalent of a velvety slice of rich cheesecake, he has a facility with and takes an unbridled glee in dialogue in a way that's unequalled among filmmakers working today, and he comes up with unforgettable characters that feel intensely modern but also like they've walked out of some long forgotten but incredible film. It's possible that no one does momentary pleasures like Tarantino, and Django Unchained has no insignificant amount of instances of sheer enjoyment, from an introductory sequence in which a scene-stealing Christoph Waltz as Dr. King Schultz liberates the titular slave (Jamie Foxx) from traders to one in which Django rides onto an estate to some anachronistic hip-hop.

But the film also comes across like a rough cut that was never looked at as a coherent whole, and some segments that start off as promising become interminable while others feel entirely unnecessary. There's no pressure on or expectation for Tarantino to please anyone other than himself, and the film feels overstuffed with ideas that should have been pruned. That sense of fun needed to power something this outsized wanes before the film reaches its ending, two hours and 45 minutes later — it's not a feature that you want to last forever, but one that seems to take it for granted that you feel that way. There's a good movie inside Django Unchained, maybe even a great one, but it hasn't been carved out of the lopsided excess.

Django Unchained begins two years before the Civil War in the wilds of Texas, where German dentist-turned bounty hunter Schultz pulls up alongside a line of slaves being transported across the state. He hates slavery, but needs the help of Django in order to identify a trio of murderous brothers who once worked on the plantation from which he came, and so he buys the man with a promise to free him and give him a share in the reward once the deed is done. Cheerful, eloquent and dryly funny — "If there are any astronomy aficionados among you," he tells a group of slaves suddenly facing the possibility of freedom, "the North Star is that one" — Schultz gets many of the best lines, and the segment in which he takes Django under his wing and shows him the ropes of being a bounty hunter are outrageously enjoyable, as they enact a Southern Western, face down an angry town from the confines of a bar, venture onto a plantation owned by Big Daddy (Don Johnson) to find their targets in a confrontation that splatters blood across the cotton growing in the fields, and face down the Klan in a scene that's pure Mel Brooks.

Waltz and Foxx are terrific together, the verbose, flowery Schultz balancing out the taciturn Django as he shakes off his former identity as a slave (just as he casts off his blanket in extravagant slow motion, bearing a scarred back) and becomes a confident force to be reckoned with. But the film slows its pace to a crawl as the pair travel to a giant Mississippi estate owned by Calvin Candie (Leonardo DiCaprio) called, naturally, Candyland, where they come up with a plan to buy back Django's wife Broomhilda (Kerry Washington). Samuel L. Jackson is there too, playing a canny house slave named Stephen even more concerned with enforcing the power structure than his owner seems to be.

If the first part of the film is Schultz's, the second is Django's, but he's competing with big, talky performances from DiCaprio and Jackson that diminish his presence in comparison, as Tarantino lets a pair of scenes at a club and later at a dinner spin out endlessly like a virtuoso playing his instrument past his audience's threshold of enjoyment and, eventually tolerance. The film is so in love with certain elements, like DiCaprio's monstrous preening, his sister's (Laura Cayouette) exaggerated Southern belle simpering and Jackson's toadying, that the suspense of the ruse that's being played gets lost in the clutter. By the time the film ends, and then ends a second time, it feels exhausted, not electric.

Django Unchained is filled with film geek touches, including a cameo from Franco Nero, who played the title character in the 1966 Spaghetti Western Django, music from Ennio Morricone, the presence of both Russ and Amber Tamblyn in a town scene, and Zoe Bell and Tom Savini playing two of a group of trackers. They're classic Tarantino — but the film's not short on auteurist touches. It's an unfortunate example of a director disappearing so far into his own vision that he's lost interest in taking a step back and looking at it in its entirety.