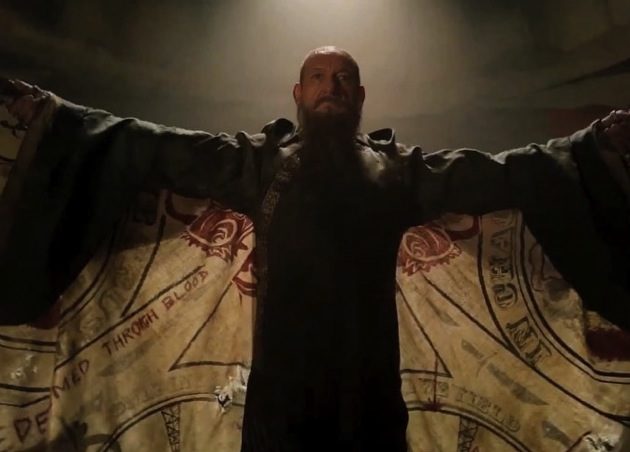 There's yet another Iron Man 3 TV spot making the rounds, and, like the international TV spot I wrote about on Monday, it leaves the distinct impression that Ben Kingsley has dialed back the affected voice he was using in his portrayal of the Mandarin.

How Kingsley Dialed Back The Mandarin's Vocal Acrobatics

In this clip, Kingsley, in voiceover, uses his signature line, "You'll never see me coming," but this time he doesn't lead-foot the l's and r's.  Instead, he breaks up the sentence with dramatic pauses, so he sounds appropriately dangerous as opposed to dangerous and destined to be a recurring Saturday Night Live character.  Check out the second clip for Kingsley's original reading of the line.

A Disney spokeswoman still hasn't gotten back to me on whether a conscious decision was made to change the downplay the Mandarin's vocal acrobatics. If that ever happens, I'll update.

In other Iron Man 3 news, Marvel Studios Production President Kevin Feige plays superhero shrink in an "Under The Armor" interview at Marvel.com and sheds some light on Tony Stark's mindset going into the movie.  Noting that this latest installment in the Iron Man saga takes place after the events of The Avengers Feige says:

"Not only did he encounter all of those crazy characters with hammers and capes and shields and gamma-irradiated strength, but a portal to another world opened above his head. Tony Stark is a very scientifically minded guy who thought he was at the cutting edge of science, and suddenly learned in those brief moments at the end of “Marvel's The Avengers,” that there is an infinite amount that he doesn’t know.

I think that made him feel small in a certain way and I think even encountering those other super heroes in “Marvel's The Avengers” made him feel like he was not the most powerful person in the world, which I think Tony likes to feel like he is. He may be the smartest person in the world, but not necessarily the most powerful. So when we meet him at the beginning of “Iron Man 3,” he’s using the suit as a shell almost. It is a shell to shield himself from all of this new information, this new influx of reality that is crashing around him. At the same time, as tends to happen in good movies, another villain arises. And suddenly, when he’s sort of at a state where he’d much rather stay in his lab and work on his suits, something happens that forces him to get out of his house, to get out of his lab and even in some cases, get out of the suit, to confront this new evil."

More on Iron Man 3 & the Mandarin: