Five Reasons To Just Say 'No' To 'Noobz' 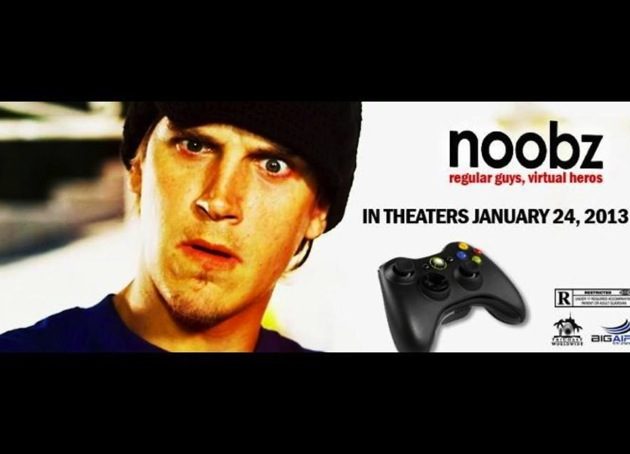 New video-game movie Noobz hits theaters this weekend, so make sure you’re absolutely anywhere else.  Pry open a manhole and spend the day pretending to be a plumber in the sewers if you have to: it will be more fun and have more in common with video gaming. We’re always excited to see new independent filmmaking, but this looks more painful than sitting on a joystick.

Filmmaker Blake Freeman (Gawd Bless America) writes, directs, and stars in this movie about competitive gaming, and based on these trailers, he's no Ben Affleck. These clips do the exact opposite of what they're meant to do: instead of making me want to see Noobz, they've proven invaluable at helping me compile a list of five reasons why this Dodgeball should be avoided:

Mewes is best known as Jay from Clerks, Jay from Mallrats, and Jay from everything else Kevin Smith could wedge him into. He’s made a career playing the archetypical stoner you knew in college, and unfortunately he’s still playing that same guy two decades later. Even though his character's name is "Andy" in this picture and not Jay, he hasn’t learned anything new, and his brainless shtick, which used to be so funny, is now desperately depressing. Fully five percent of the trailer consists of him shouting “Bro!” in the most annoying possible way.

If you can make it to 0:35 without wanting to punch him, Captain Kirk wants you back on the bridge so Captain Adama can shoot you, you Vulcan robot. 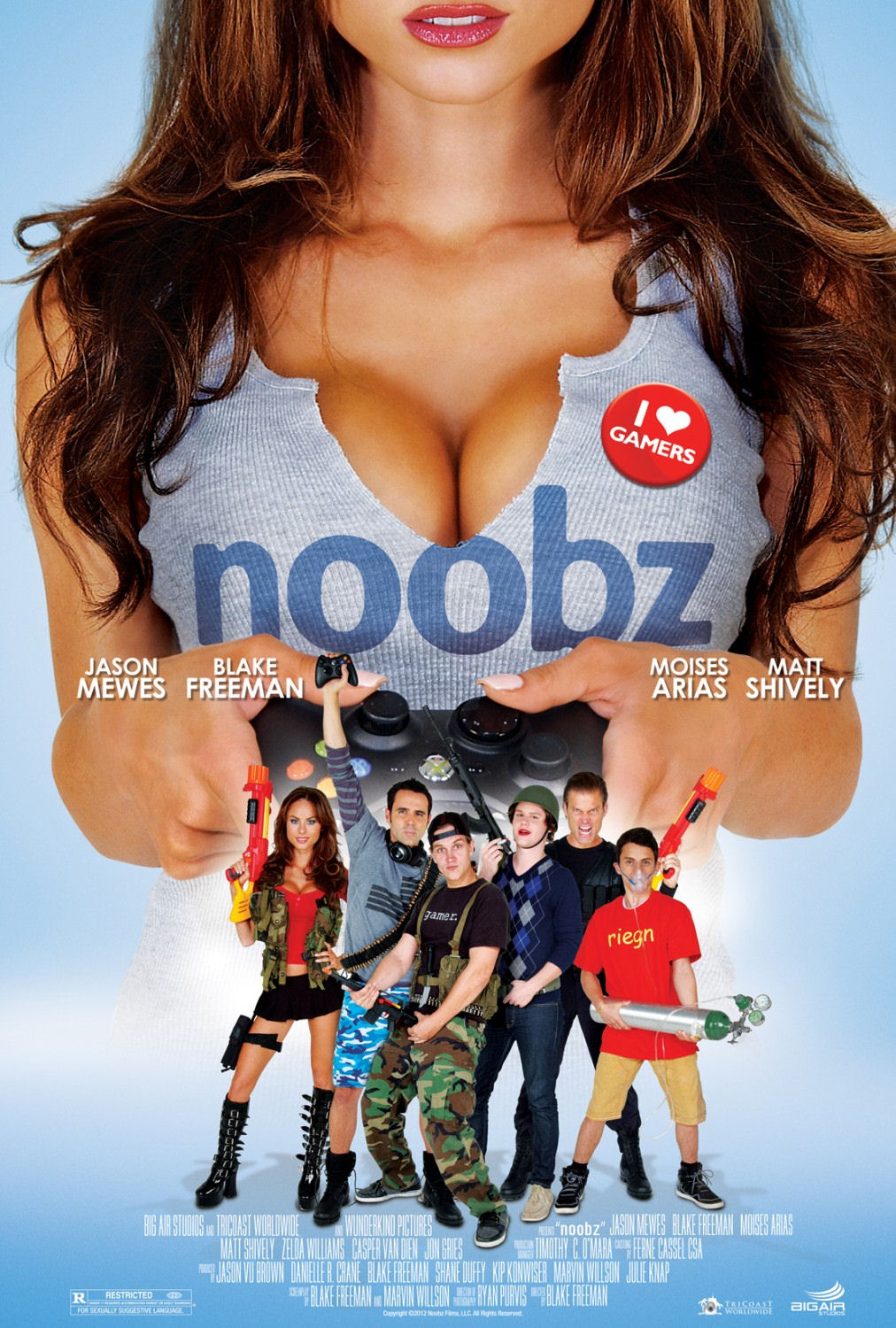 Along with the trailers, this poster pretty much bludgeons you over the head with the second reason you should say 'No' to Noobz: it's going to be yet another Revenge of the Nerds-meets-Dodgeball-style comedy that relies on the tired conceit that gamers are...awkward around women!  Huge chunks of the trailer are based on the gamers going to a strip club. Are you chortling to yourself about the zany madcappery that's hinted at in these clips?  I didn't think so.   Another scene has Blake warning a woman not to use her "vajayjay" to destroy his team's gaming chemistry. That's so 2007.

It looks like Moises Arias gets to play the asthmatic gamer geek most terrorized by the female of the species and, if the movie proves to be as predictable as I predict it will be, he'll ultimately end up in the sack with a woman who's either incredibly beautiful or incredibly freaky. Probably both. Arias, who played Juan Pablo in Nacho Libre, does have some comic chops though, so he could be the sole redeeming performance in Noobz. If he's not, check him out in Toy's House when it's released.  He's laugh-out-loud funny in that movie.

Another sophisticated sexual theme of this movie appears to be that fat women are funny. I'm afraid that's pretty much it.  Chenese Lewis plays "Milkshake," a plus-sized stripper who apparently almost kills one of the gamers by sitting on him.  It's an odd role for someone whose Wikipedia page describes her as a "positive body image advocate," a spokeswoman for the Binge Eating Disorder Assocation and past chairperson of the Love Your Body Committee.

Oh yeah, here's another cutting-edge plot point to anticipate: one member of the gaming team, Oliver (Matt Shively) is sort of gay. You know this because in one of the trailers, Freeman's character's angry girlfriend curses him out for having a closeted gay friend and Jay later points out that Oliver is wearing lipstick.  Oliver also says "Put that in your pipe and suck it," instead of "smoke it." I don't want to make to make too much of an assumption based on the trailer, but the actual gaming world has such real and terrible problems with homophobia that I'd hate to see a movie validate them for cheap laughs. 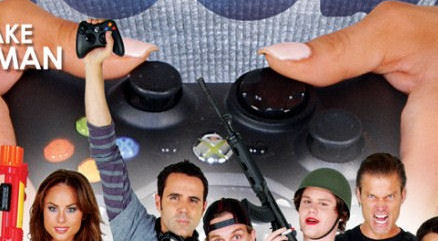 Noobz's Facebook page claims that it's “an indie film comedy that is the first realistic look at competitive gaming.” Which is weird, because an Amish preacher could probably demonstrate more knowledge than the stuff shown in the trailers.  The only gaming detail visible in any of the trailers is “you hold a controller”. And the poster doesn’t even get that right. The left thumb should be on the upper stick, or at least on the center of the D-pad.

There’s a passing mention of Frogger, but the only gameplay footage from the fictional Cyberbowl video gaming championship is based exclusively on Gears of War 3.  While it's clearly a form of product placement, it's a bizarre choice at that: Gears of War 3 isn’t a championship level game by any means (especially with the atrocious host-advantage issues in multiplayer).  The product really doesn’t benefit from the association.

More worrisome: there isn’t any knowing gaming humor in the trailers. (Remember Wreck-It Ralph ?)  Much of the movie seems to be road-trip scenes, which could just as easily be applied to nerds on their way to a mathematics Olympiad, or a Warhammer tournament, and when they finally arrive the scenes are based on the players being assholes to each other while holding joypads — rather than anything to do with actually playing the game. 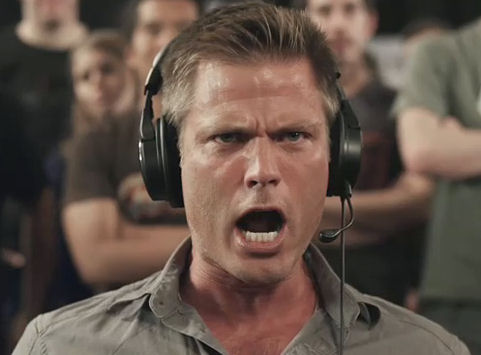 I can't tell you how much it pains me to see a screaming Casper Van Dien using up the last of his Starship Troopers credibility to play the competition's hard-ass announcer.

He's gone from a cult classic movie that featured a brain-sucking bug to a movie that looks like it just plain sucks.