'Everything Changes − Now!' Why Wreck-It Ralph May Be The First True Gaming Movie

Everyone is either looking forward to Wreck-It Ralph or still refers to video games as “those beeping boximacallits.”  There are no other options. Gaming movies have a bad reputation, which is weird, because, despite what you may have heard and read, they have yet to materialize. We’ve seen dozens of action movies that share the titles of video games and little else, and run from reprehensible to ridiculously profitable — sometimes in the same series. We've also watched feature-length advertisements for video games that we've paid to see in hopes that there might be a movie in there somewhere. Case in point: Universal Pictures’ The Wizard. But that may be about to change.  Disney’s Wreck-It Ralph could be the first true gaming movie — the first of a genre that could some day stand alongside war, horror and gangster movie genres.

It’s a genre whose time has come. The children being brought to the latest Disney movie have grown up with games, while their parents have watched their kids — and the games — grow from simple noise-making bundles of reflexes to fully interactive 3D characters.

I haven't seen Wreck-It Ralph yet, but I already know one thing that's smart about it. The movie doesn’t tie itself to a single franchise, but populates its world with characters and cliches from all of them. Imagine Super Smash Bros Brawl without being limited to Nintendo, then give them time off to chill between battles. That's the level of world we're looking at here.

Wreck-It Ralph puts together a dream team of retro characters from a savvily chosen array of games: Zangief from Street Fighter, Q-Bert, Sonic, Kano and even a Beholder.  If you're not familiar with that last creature, he exists in video games the same way Captain Kirk exists in video games — he’s certainly been there but comes from a whole other world: Dungeons & Dragons. The Beholder is an extremely cool nod to gamers.

Better yet, the characters are all rendered with such love that even the zombie — the most generic enemy in videogaming history — is recognizably from a specific game series. The double-fire-axe and torn beige shirt distinguishes him as a walker from House of the Dead clearer than a passport with his bite-marks on it.

Wreck-It Ralph is stuffed with so many celebrity cameos that Chun-Li, also from Street Fighter, as a background character. Other companies have built entire films around her, although considering how that turned out, it’s probably a good thing the producers didn’t follow suit.

The cruelest (but most accurate) gaming revelation was the presence of Sonic and Bowser, but no Mario. The writers told TotalFilm.com  that Mario is such a powerful character that there would be no way to put him in the movie without him dominating it. But Sonic? Sure, stick him in there. There was never any doubt about who won the '90s battle between him and Mario — and his inclusion removes any doubt that the writers really understand the games they’re referencing.

Others have bitched about Zangief ‘s presence in the Bad Guys support group when he’s just one of many playable Street Fighters, but come on: he was a Russian in a fighting game in the 90s. He was also almost unplayable in the original, so the only way most people saw him was from the wrong end of a devastating Screw Piledriver. He’s become much cuddlier since, and a surprisingly effective character in Super Street Fighter IV multiplayer.

This detailed attention to our old gaming friends is glorious, but could cause a hardcore backlash. The trailers’ focus has obviously been on these recognizable characters, but they’re just as obviously trailer-trash. We’ve probably seen fully half their screen time already. This retro-disappointment is going to be a big complaint for people missing the point, but put it this way: These are Expendables cameos, not Expendables 2 cameos. We can expect these old-school characters to turn up for a few seconds then get out of the way of the main story.

Still, for any veteran gamer it’s mind-boggling to see so many different game publishers cooperating. That many intellectual properties overlapping means more legal wrangling than the average nuclear test. That also probably means that none of these characters will actually do anything for most of the movie, but it's a real coup just to have them along for the ride.

Besides, even though, after seeing the trailers, some people are expecting this: 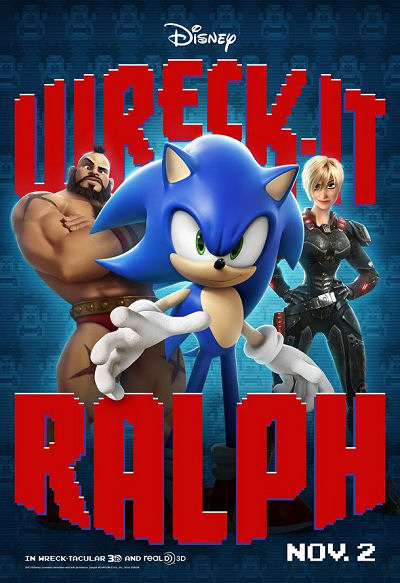 The movie has to be about these guys:

And that’s a good thing. Because this isn’t a retro movie. It’s a gaming movie. Sonic and the Beholder will get asses in seats, but it's the original characters, and the, I hope, original story that will make the faces on the other ends of those asses leave with smiles. One of the parody games featured in Wreck-It Ralph,  Hero’s Duty, fuses Halo, Call of Duty, Battlefield 3 and every other action shooter, while another, Sugar Rush couldn’t be more of a Mario Kart clone if it featured an Italian plumber. The filmmakers can make all the pointed jokes they want about these and other video games without their publishers complaining. (And it’s not like every other gaming company hasn’t made a knock-off of Mario Kart already.) 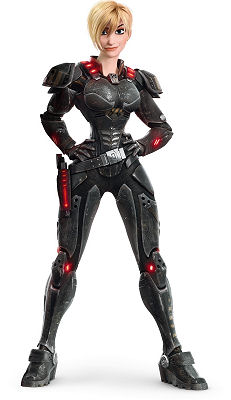 The new characters are well capable of carrying the movie. Ralph is entirely believable as an 1980s game villain (and already has his own game). Sergeant Calhoun is a tough female soldier who kicks ass and actually wears sensible body-covering clothing, meaning Wreck-It Ralph is better at character creation than most modern video games.

Wreck-It Ralph is important because games aren’t a niche market anymore. They’re everywhere and everyone, from casual Angry Birds players to 80th level World of Warcraft Paladins.  It looks like the movie industry is finally ready to take video games seriously. And by that, I mean, have some real fun with them.