Alice In Umbrella-Land: Three Things The Resident Evil Movies Do Right (Besides Make Buttloads of Money)

As Paul Thomas Anderson painstakingly rolls out his latest labor of love, The Master — next stop, New York City, with a 70-mm screening at Manhattan's Ziegfeld Theater on Tuesday night — another Paul Anderson with different middle initials — W.S. — is preparing to infect the worldwide box office like a zombie virus  on Friday with Resident Evil: Retribution. It's the latest chapter in the movie franchise based on the blockbuster game franchise, which will also spawn a new installment, Resident Evil 6 on Oct. 6.

The Resident Evil movies are the most mocked video-game movies because they’re also the most popular. Four movies earning almost half a billion dollars over budget usually wins most logical arguments when it comes to this subject. Unfortunately, heated Internet arguments have little to do with logic or reality — particularly if you take into account the graph I've prepared using data from Metacritic.com and Box Office Mojo.com.  You'll find it after the jump, but the gist is that when it comes to box-office revenues, Metacritic reviews are about as essential as unicorn insurance. 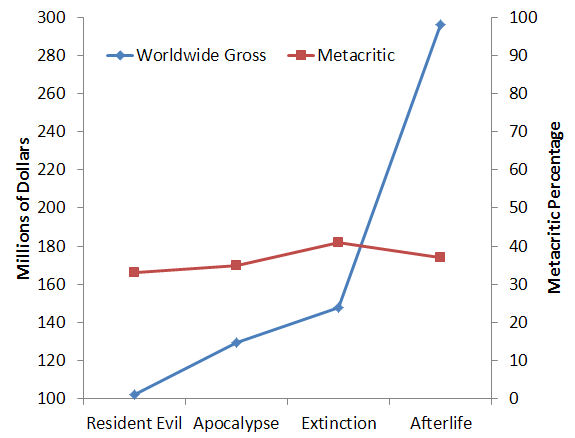 The exponential growth in Resident Evil profits is a clear sign that Constantin Films, the producer behind the franchise, is doing something right. As an unabashed fan of movies,  I count three: 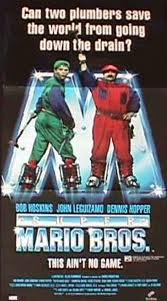 For many kids this was worse than Bambi’s mother dying.

1. Streamline the Core Plot: Some games are so impossible to convert that the process drives screenwriters completely insane, as proven by Mario Bros.

Resident Evil is not one of those games. The plot is good guys versus evil zombie corporation, and the movies aced it. The most common complaint is that the movies don't follow the plots of the games, but all the producers did was cut the repetitive rubbish which stretched what amounts to a 90-minute story into more than 12 hours of gameplay. In the Resident Evil games, the sinister Umbrella Corporation's two most loathsome products were voracious zombies and utterly unbreakable doors. The movies wisely dropped the the latter.

2. Jettison Irrelevant Sub-Plots:  The Resident Evil games have more dubious sub-plots than a soap opera — sub-plots, by the way, that require the brain activity of  bracket fungus to grasp. These plot tangents tended to be designed to justify and set up a sequel rather than advance the story at hand. You had characters chasing after their brothers, hunting down rogue mercenaries, searching for missing presidential family members, and in one memorably stupid case, learning that the city was going to descend into zombie hell but patiently waiting until that happened before making an escape.

Anderson smartly left most of that crap out of the Resident Evil movies and this ties back in to my first point: The essential conflict of the movies is simple and amounts to: sexy badass Milla Jovovich shoots monsters, which takes the occasionally stupid complexity of the video games and refines it into a concept that is almost as beautiful as the theory of relativity 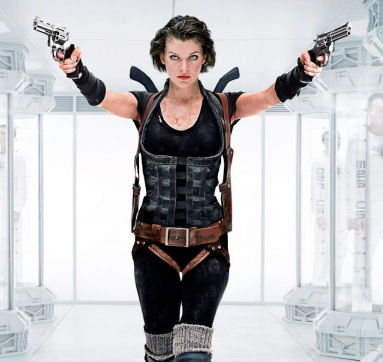 Dressed for a night of clubbing.

When the basic gameplay and the basic conflict doesn't change, you contrive reasons to keep doing the same things over and over.

Another effect is the pointless multiplication of viruses and corporations. At last count, there were nine different viruses and parasites creating the monsters, and since the first t-virus could clearly do anything it wanted in the first game, all this did was give the fan-wiki editors more to edit .

Likewise, the Umbrella Corporation has been replaced by WilPharma and then Tricell, which did nothing but allow a graphic designer to bill additional hours by slapping the logos of these new nefarious companies on the exact same Generic Monster Laboratory equipment that Umbrella was using. If you saw a movie sequel in which the names were changed but the plot was identical, well, that would describe just about any horror franchise out there. I’m glad Anderson & Co. didn't do that.

3. Escalate: The Resident Evil movies went the action movie route, which meant that the stakes had to be escalated with each subsequent sequel. Ditching the game plot allowed for this genuine progression. The first movie was about a secret lab infected with a virus. In the second, it was an entire city. In the the third, the plague had spread around the world.  The ante was upped in each case, which was far better than the game's plot of,  “Where’s Wally’s next secret viral base which will blow up at the end of the game?” 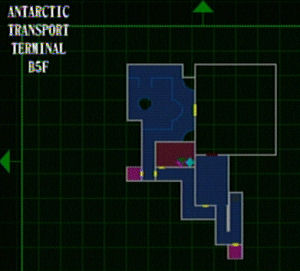 Behold the exotic hallways of Antarctica

The movies' disconnection from the source material is justified. Players have already seen the game plot, and non-players couldn’t care less about it. If the movies slavishly copied the games, they would amount to glorified extended cut scenes — and many gamers skip those when they’re playing.

If the master works of Conan Doyle can be interpreted in this fashion, then it certainly shouldn't be a problem when you're dealing with mowing down and blowing up loads of zombies. Keep up the good work, Mr. Anderson.