Activision Don't Need Hollywood: Why 'Call Of Duty' Will Never Be Turned Into A Movie 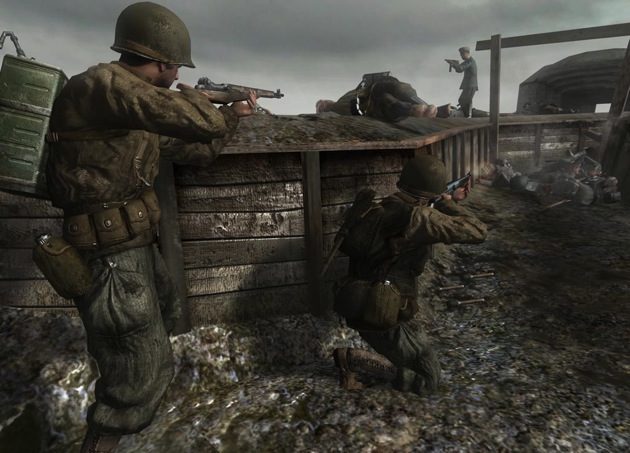 Call of Duty is one of the most profitable gaming franchises ever created. The ninth in the series, Call of Duty: Black Ops 2, grossed more than half a billion dollars in its first 24 hours of sales. That’s enough to buy three actual F-22A Raptor stealth fighter jets. When a video game can afford to purchase air superiority over most countries — and have enough to hire Robert Downey Jr.as a pilot — that’s the sort of thing Hollywood notices. 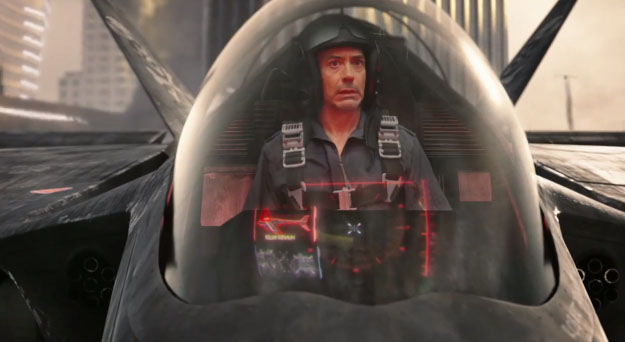 It’s not just a guaranteed movie, it’s a trilogy of trilogies, every franchise-loving movie executive’s wet dream. The series started with three games set during World War II, three more based on Modern Warfare, and the Black Ops triptych spans both eras and extends well into the future.  Every game is about a few guys with guns pretty much ending wars single handedly. Most action movies already have that plot. Making a film should be such a no-brainer it becomes invisible to zombies. But Activision CEO Bobby Kotick recently told the New York Times that there won’t be any such movie. According to him, "movies based on video games rarely please devoted fans and could taint the brand." Here are four other reasons:

Hollywood turns everything it can into movies because that’s its job. Many video game franchises have leapt at the chance, because the box office generates bigger numbers than every other field outside of astrophysics. But Activision is already making the big money. The midnight launch of Modern Warfare 3 moved over 6 million copies of the game and raked in $400 million. Remember this was a a midnight launch — around the world, people queued up to get the game a few hours before everyone else. That’s not just “this video game is popular,” that’s “this video game is more popular than most movies.”

Making a movie necessarily means compromise, and Activision reacts to compromise the way lumberjacks react to trees: cut them down to make more money. When Modern Warfare 2 became the most successful shooter history had ever seen in 2002, Activision famously fired and sued the people who made it, instead of paying promised bonuses. (The cases were settled out of court last May.)

In the New York Times interview, Kotick’s explanation for this action was: “You find out two executives are planning to break their contracts, keep the money you gave them and steal 40 employees. What do you do? You fire them."  He does not sound like the kind of guy who would have a lot of patience for a process that involves actors, directors and other persnickety creative types.

3. Nobody Cares About Plot

Call of Duty’s main attraction has always been the multiplayer mode. That’s why people are prepared to stand in line to get an early start, or pay extra for elite weapon unlocks and XP bonuses. The entire point of the game is shooting strangers in the face. Millions of players have spent over a hundred hours on the game. Some have played the game so much, they take on attack helicopters and machine guns with nothing but their knives, just to keep it fresh. And they still wouldn’t consider single player. 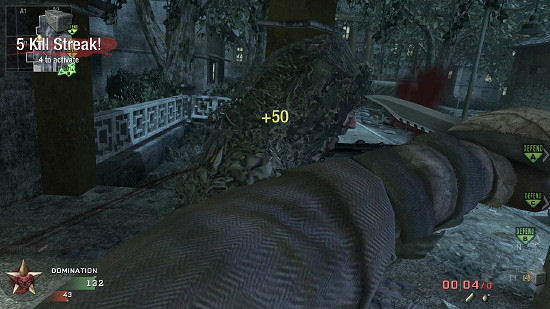 4. In Some Respects, The Games Are More Immersive Than A Movie Could Ever Be

Most of their fans might not care about the single player mode, but the developers do, and they’ve been using it to blur the line between gaming and movies. While early games were traditional shooters, the later additions to the franchise have used the single-player mode to push narrative boundaries. Call of Duty’s single player is the embodiment of railroaded cut-scene cinema. This is a modern style of game design where instead of having choices, the player is effectively riding a roller-coaster of experience. Modern Warfare had entire “levels” which were nothing but point-of-view shots from the doomed and dying at various points in the conflict. 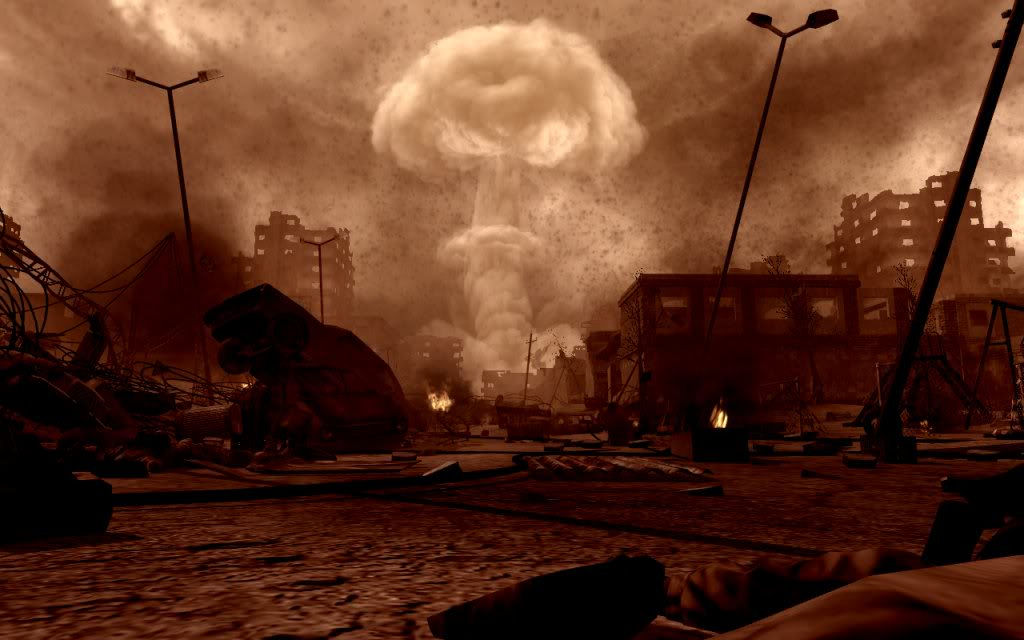 After spending half the game as an immortal warrior gunning down dozens of enemy troops, you spend a sequence — you couldn’t call it a level — painfully crawling through the wreckage of a crashed helicopter. It gradually dawns on the player that there’s no objective here: there's no button you can press to stand up, no health kits or help. You are inhabiting a character who is going to die.

This optional story mission morphed from artistic experiment into advertising with Modern Warfare 2. The infamous “No Russian” level had your undercover agent joining terrorists as they gunned down the population of a civilian airport. It was a blatant tactic to generate outrage and, in the process, free advertising. And it worked.

Turning these plots into movies would only remove the emotional involvement of taking part. 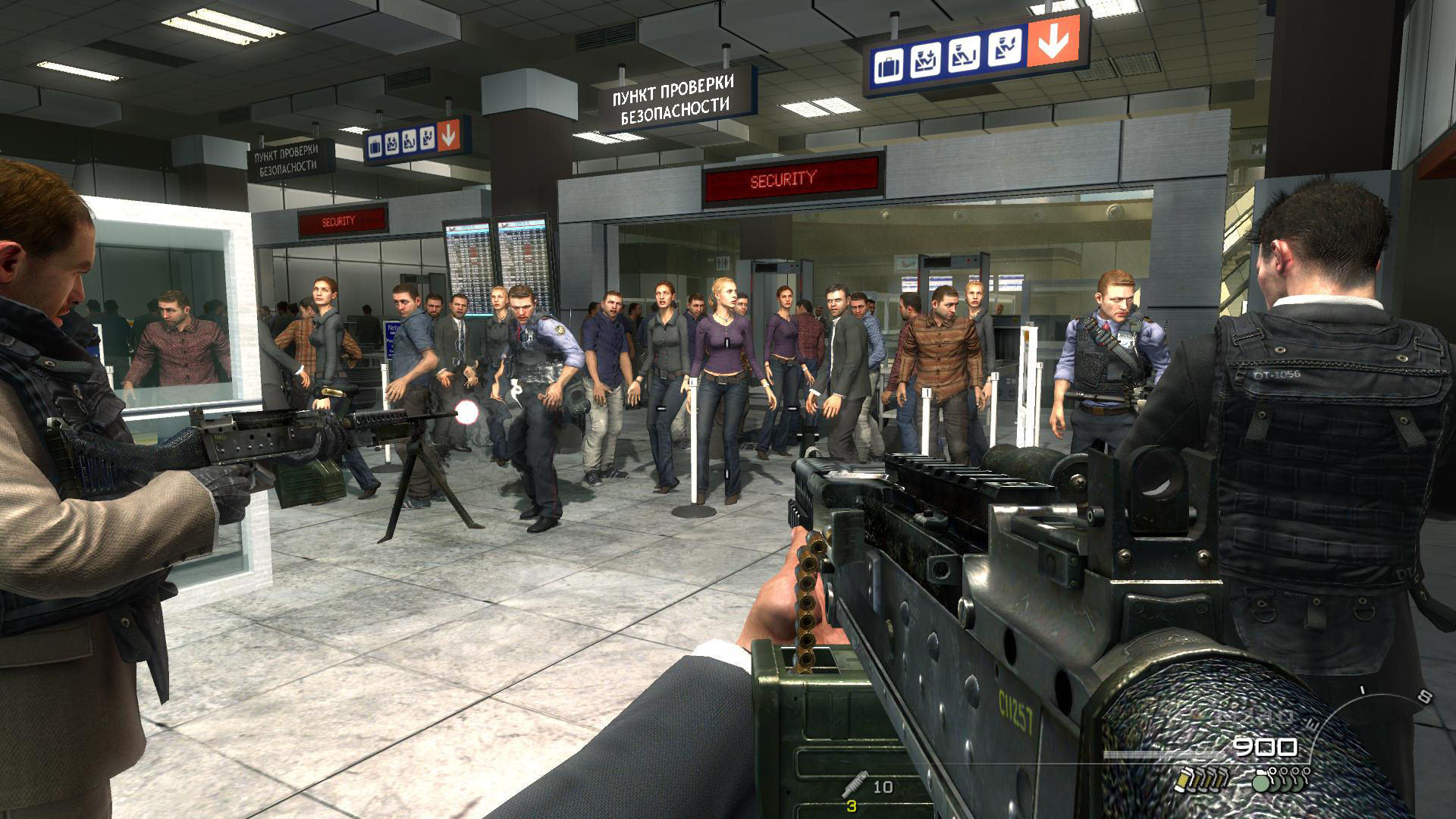