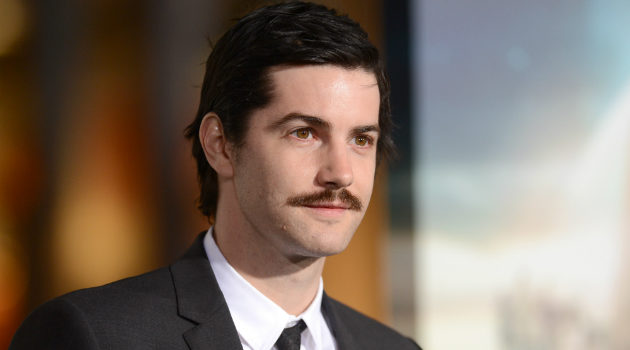 Everything is connected in Cloud Atlas, a few things more directly than others: actor Jim Sturgess portrays one heroic, kind-hearted soul through its evolution from a seafaring 19th century lawyer to a Korean freedom fighter in the futuristic Neo Seoul, many lifetimes (and some controversy-courting Asian make-up) later. When he first read the script, adapted from David Mitchell's novel by Lana & Andy Wachowski and Tom Tykwer, Sturgess understandably had some questions. For starters: Why?

"I had a million questions," Sturgess admitted in a chat with Movieline about Cloud Atlas, which required him to play multiple characters — including the sci-fi hero Hae-Joo Chang, disguised under make-up that set critics abuzz — linked by the same soul. "Like, why would you want me to play an Asian man in your film? What reason did they have — and was that going to be okay?"

The very idea of eternal souls traveling from one mortal identity to the next forms the backbone of Cloud Atlas, which waves away those raised eyebrows fairly quickly. Many of the cast play against gender, ethnicity, and even age in the film, though the person underneath always remains crucially recognizable.

In the film's Neo Seoul segment, set in the year 2144, Sturgess turns in some of his finest work to date — nearly unrecognizable under his futuristic Asian make-up, and the better for it — as Chang, a determined rebel operative who falls for his clone charge (Doona Bae) and helps her change the fate of humanity.

When Cloud Atlas first came to you, when you first read the script, did you feel an instant connection to the material? Did you think, ‘This role must be mine’?
It was kind of weird, actually. I was sent the script and was told they were maybe interested in me to play these two parts, Adam Ewing and Chang, which was pretty confusing. I didn’t understand what it was all about. So I read the script — it was while I was shooting another film so it was pretty rare, normally you’re so focused on what you’re doing that you don’t really read other scripts — but it arrived, and it was sort of just sitting in my hotel room where I was filming, and it just said “Andy Wachowski & Lana Wachowski & Tom Tykwer,” and I thought, this looks interesting.

Eventually I couldn’t help but to just have a little peek, and I ended up reading the whole script. Then I met with Andy and Lana who came to London and they asked if it was something I’d be interested in doing. They hadn’t chosen me, I guess they were meeting other people, but we just had a meeting about the ideas. I had a million questions. Like, why would you want me to play an Asian man in your film? What reason did they have — and was that going to be okay?

That is an interesting and important question with your portrayal of Hae-Joo Chang — one I think the film itself answers as it explores the boundaries of identity.
I hope so.

When it first came out that Cloud Atlas would be blurring the lines of ethnicity, the internet had some very heated discussions.
Rightly so. I totally understand where it comes from. But yeah, you don’t get the full picture unless you watch the film, so just to get it from the trailer or the images that were put online could be jarring for some people. Which I understand.

What were some of the bigger questions you initially had for Lana and Andy?
I was just like, ‘Explain to me why I would be playing this character,’ and they explained to me the idea of the souls — that whoever was to play Adam Ewing, it was necessary, absolutely necessary, that that soul develops into the Hae-Joo Chang story. Because essentially they’re telling very similar stories, just in different paths, and Hae-Joo Chang is a progression of a soul, like Adam Ewing, who made very unconscious decisions of human kindness because it was in his make up to know right from wrong. But he had no idea he would change the course of human history. Then there’s someone like Hae-Joo Chang, who is battling the same idea of repression but in a more futuristic landscape but making very clear conscious decisions; he knows what he will do and that what he will achieve with Sonmi will alter the course of human existence.

I like the idea of approaching it as an actor playing a soul through multiple lifetimes rather than simply individual characters.
And there was a reason for absolutely everything. That’s what was so exciting. It wasn’t just, we want you to play this because it will be cool — no, this is the reason, this is your journey of your soul and this is how it maps out, what it represents. And, you know, Tom Hanks’ represents something very different, and Halle’s character represents something very different for her.

Tom Hanks said he had a lot of fun trying to kill you.
I know he did, I was there! [Laughs] I didn’t have so much fun having him try to kill me each day. He’s a force of nature, that guy. It was amazing just to meet him and work with him.

How did you feel about becoming, in Cloud Atlas's Neo Seoul segment, a bona fide action star for the first time — and not only that, but a Wachowski action star?
It felt pretty cool, I’ve got to say! There were moments, little “pinch me” moments, just standing there clutching a gun, flying a space motorbike, knowing you were being looked after by the Wachowskis.

They did make you look pretty cool. Or maybe that was you.
[Laughs] No, it was all them! But it was cool knowing it could be such a sci-fi experience within a bigger film. It was just a piece of a bigger picture.

Doona Bae is such a revelation in Cloud Atlas, partly because we haven’t seen her before in an American film and speaking English but also because when you think of this film, the idea of a relative unknown stealing the spotlight from the famous Hollywood “movie stars” falls right in line with the larger themes. How did you two develop your onscreen chemistry, that connection that binds your characters?
I was really nervous to work with her because I was just told that she was a Korean actress who spoke very limited English. You would be amazed at how much her English has progressed since we first met. I’m so proud of her that she could do a press junket really not even using a translator. But we met and even though there was a huge language barrier, we got on instantly. Within five minutes of meeting I knew we were going to get on really well, because she’s got an awesome sense of humor. And the language barrier almost brought us closer together, in a weird way. Instead of being able to talk, we had to sort of try to make each other laugh a lot because it was our only way of connecting. So we’d just mess around most of the time. [Laughs] We grew really close. And you know, it’s about the process of making a film. I grew very protective of her in a strange way — she was so out of her regular comfort zone and she was all on her own, didn’t speak much English at all, and she was in a foreign city… I sort of felt duty-bound to look after her a little bit. We just had a lot of fun.

You got a chance to play around with a Scottish accent in one of the film’s more broadly comical scenes, in which you actually get to smash Hugo Weaving over the head during a bar fight.
That was cool! They cut that scene down a lot, actually. I mean, I understood why they had to. We actually rehearsed this giant kind of Spaghetti Western bar fight, and there were whole scenes where I was doing shots of whiskey and punching someone, then doing another shot of whiskey and punching someone. I was throwing people over my head! But obviously, it’s a big four-hour movie and they had to start shaving it down.

Maybe the eventual director’s cut or extended cut will have all four hours intact so we can see this fight.
I hope so! It was fun. I liked doing it.

As it happens you have another science fiction romance story coming out — Upside Down, with Kirsten Dunst. What do you think it is that’s drawn you to sci-fi and to so many romantic figures of late?
Each choice is sort of a reaction to the last thing you’ve made, and I had just done a film called The Way Back, which was a grueling, really bleak and difficult shoot — it was life-changing and amazing in so many different ways, but it was tough. It was all outdoors, no studio work. No comfort. We were out in the mountains of Bulgaria and the deserts of the Sahara, and it was really, really hard work. So the next script, I didn’t want to do anything like that at all. I’d just had that experience and I thought, what can I do that’s completely opposite to that? Then Upside Down kind of landed on my lap and it was this great, fun love story with this great idea of these two worlds, very much a CGI film but in a cool and artistic kind of way. So I thought, cool — I’ll go for that. I’m a fan of Kirsten Dunst and I knew she was going to be playing the girl, so I was really excited that they asked me to do that. I’m not necessarily drawn to science fiction stuff — I guess One Day was very much a love story, but the draw of that was to play one character that you’d stay with over 20 years, and I thought the character of Dexter was interesting.

You seem like something of a natural born romantic.
[Laughs] Maybe, I don’t know!

There’s another project you’re about to start; how would you describe Electric Slide? [The film, about Eddie Dodson — the "New York Yankees Bandit" — was previously set to star Ewan McGregor.]
It’s a film called Electric Slide with a first time director called Tristan Patterson — it’s a true story, and set in the 1980s. It’s a cool period! I have to grow a mustache for it, that’s why I have the beard. Totally ‘80s, in a cool way though. Hopefully it’ll look great. I get to rob some banks!