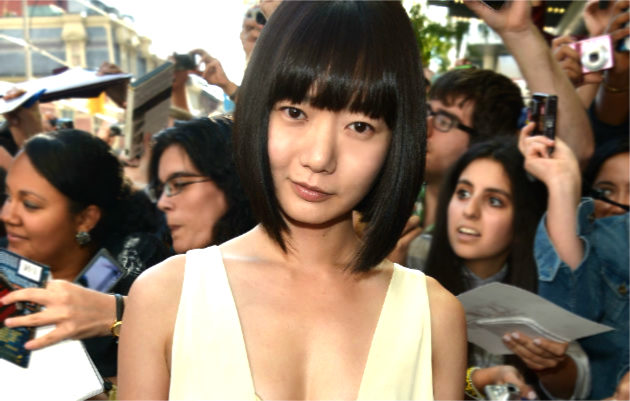 You'll hear much of the movie stars and familiar faces that pop up again and again in Tom Tykwer and Lana and Andy Wachowski's sprawling, ambitious Cloud Atlas, from Tom Hanks to Halle Berry to frequent Wachowski Starship performer Hugo Weaving. But the beating heart of the film belongs to Korean actress Doona Bae, who makes her English language debut as the luminous Sonmi-451, a genetically-engineered "fabricant" whose fierce humanity and love for a freedom fighter (Jim Sturgess) will change the future.

Like Sonmi-451, Bae's world opened up with an unexpected offer from a stranger. A successful model and actress in her native South Korea, she starred in Park Chan-Wook's Sympathy for Mr. Vengeance and Boon Jong-Ho's The Host — two of the most popular Korean crossover hits of the last decade, although the humble Bae is still surprised to hear that American audiences may have seen her work. Courted for the role of Sonmi-451 by the Wachowskis themselves, Bae won the part, then took a crash course in English to film her scenes.

Bae's Sonmi-451 (her name a nod to Fahrenheit 451 courtesy of author David Mitchell) inhabits the futuristic world of Neo Seoul circa 2144, where she's broken out of capitalist enslavement by Hae-Joo Chang (Sturgess), a rebellion operative. Although the actress, like her castmates, portrays multiple characters through the film's nested plots (including a pre-Civil War Caucasian belle with freckles and a hoop skirt), Bae commands the screen in one of the most transfixing performances of the year every time the film alights back on her ethereal Sonmi.

Movieline spoke with the eloquent, soft-spoken Bae in Los Angeles about her journey with Cloud Atlas and the childhood dream of traveling stateside that she couldn't follow then, but is living now.

How did you first meet the Wachowskis and hear about the vision they and Tom Tykwer had for Cloud Atlas?
They just called me! It was weird because I had no American agent at the time, and I didn’t even have a manager in Korea. I was in between managers, so it was hard to find me. [Laughs] But I got a call from my Korean friend, the film director Pil-Sung Yim [Doomsday Book], and he said, “Doona, some famous Hollywood filmmakers want to send you a script – do you want to read it?” I said, “Yes, of course!” I got the script and I found, “Oh my god – this is Lana and Andy Wachowski and Tom Tykwer, this must be amazing.”

After you got the script, what happened next?
I did some auditions and sent in a self-taped recording – my older brother recorded it, and I just read the Sonmi part at home.

Which scenes did you record?
The scenes with the Archivist in the interrogation room, and one with Chang after I see the slaughterhouse. Two scenes. Then we met each other in Chicago and had camera tests. Then I got the part. [Laughs] It was like a dream. I’m still dreaming.

Were you already interested in doing English-language films or attempting to find Hollywood movies to cross over with before Cloud Atlas came along?
Actually, no. I wasn’t looking for any parts – if so, I would have learned English earlier. I think if so, I would have prepared. But I thought it might not be possible.

Here, science fiction and foreign film fans have seen your work – Sympathy for Mr. Vengeance and The Host in particular played well stateside – so it felt like it would make sense for you to make that move.
Really? I haven’t thought about it. Actually, I wasn’t ready, I think – but I worked hard. I worked hard on the language. My favorite subject was English and I wanted to study English abroad when I was young, when I was a kid, but my mom said “No, it’s too dangerous to go abroad by yourself.” So I gave up. Now I’m learning English. I’ve been learning English in London for six months.

Jim [Sturgess] says your English has improved quite impressively, and fast.
Oh, thank you Jim! So sweet.

Had the Wachowskis seen your film Air Doll? Your character follows a slightly similar path to Sonmi’s.
Yes! When I first met Lana and Andy on Skype, I was so curious about it. “How do you know me?” I asked. [Laughs] And Lana said, “We saw Air Doll and The Host and Sympathy for Mr. Vengeance." "Oh, Air Doll!" I see. There is some connection between the two characters.

Sonmi has such a big arc – she changes so much, from being naïve and childlike at the beginning of her story to becoming such a powerful and intelligent woman.
That’s exactly what I think of her, actually. I like Sonmi because she has both purity and innocence and at the same time she’s got such a strength.

When you were playing her, did you feel a moment in her journey when you felt like she changed the most on her way to becoming who she would be?
Actually I don’t study the script – I didn’t analyze anything, I just emptied myself and felt Sonmi, let her into my heart. So when I first saw Yoona-939 die, it was a big shock. It was like I realized something at that time. Also when I met Chang and saw the slaughterhouse – it was gradual.

There are so many actors in this cast, but beyond Jim who you spent most of your time with, who did you bond with the most?
Ben [Whishaw]. We became good friends. We actually had no scenes with each other but personally we had a good time – and actually, I was very lonely because I went to Berlin by myself, on my own. I was lonely and a little bit depressed and stressed, and Ben was so sweet. He cheered me up. I’ve got some good energy from him.

You recently starred in As One, a film about a Korean table tennis team. Did you ever challenge Susan Sarandon to a match?
Oh, not yet! She’s got a ping pong club in New York City, I want to go there! I trained for six months with my left hand, so I can play ping pong with both hands. I should challenge her. I can beat her!