James Bond is not going all emo on us.  In a new Vanity Fair cover story on 007 actor Daniel Craig,  the actor defends the tear his character shed over the death of the girlfriend who betrayed him, and says Bond is not getting soft. “He didn’t sob. There was, like, a tear in his eye. No snot coming out of his nose, you know,” Craig says in the magazine's November issue, which is out this month. 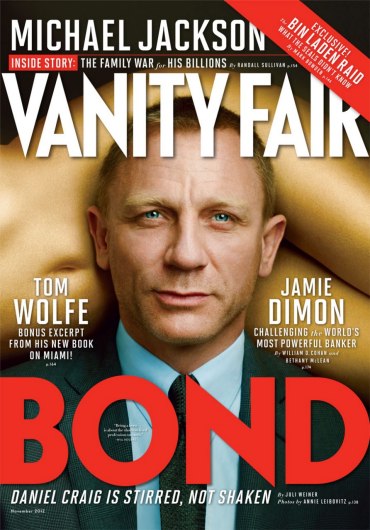 With the latest Bond adventure,  Skyfall, set for a Nov. 9 release date, Craig talks to the magazine about the responsibilities that come with the character. "Pierce [Brosnan] used to say that it’s like being responsible for a small country. It’s kind of like you have to look after it diplomatically. I kind of get that, but I can’t really say that’s my deal. I’m not going to be the poster boy for this. Although I am the poster boy.”

And being the face of one of the biggest money-making franchises in cinema has its drawbacks. “You talk to people in the movie business who have been doing this 40 years and they all say the difference is that, back in the day, you could go and have a drink in the bar, get drunk, fall over, have a good time, relax,whatever, and no one would know about it. But now everyone’s got a camera” Craig says. So you can’t live a normal life anymore. Because it will become public knowledge that you’ve whatever—gotten drunk in a bar or skinny-dipped on a beach or something. Things that normal people do occasionally. And in a way that’s kind of—I’ve got to be high-class. I’ve done a lot of things in my life. But you have to think in that way. Which is sad, because I like bars.”

The actor also takes a pragmatic look at the Heineken product-placement deal that will have the martini-drinking Bond drinking its beer in Skyfall.   “Heineken gave us a ton of money for there to be Heineken in a shot in a bar. So, how easy is that? Just to say, O.K., there’s Heineken. It’s there—it’s in the back of the shot. Without them, the movie couldn’t get sold, so that all got kind of blown up. ‘Bond’s new drink is a Heineken.’ "  Craig says, pointing out atht Bond "likes a lot of drinks—Heineken, champagne; it’s all in there.”

Not that Craig will totally sell out in the name of product placement. “I’ll drink a beer in the shot, I’m happy to, but I’m not going to do an ‘Ahhhhh’ [pantomiming an actor looking refreshed]. And I would say this because they’re paying, but they’re kind of respectful about it. They don’t want to screw the movie up.”

If you need more Bond, check out Annie Leibovitz's shoot with Craig here.