'Kill Bond! Now!' (But Not Before I Say Something Appropriately Evil) − The 10 Best Bond Villain Lines

Bond villainy is demanding work. Evil genius and a lust for world domination are crucial, but  future  Blofelds of the world take note,  a way with words — steeped in wit and curare, or whatever neurotoxin the cool kids are using these days — is essential.  Given that inevitable defeat and death are occupational hazards of obsessively pursuing the world's greatest spy,  one of the few ways a Bond villain to distinguish himself from the other loser Bond villains is by delivering some of the most memorable lines of the movie. Sometimes it's the little victories that count. Without further unnecessary exposition, the 10 best lines delivered by Bond villains in ascending order.

10. “I like a girl in a bikini: no concealed weapons.” — Francisco Scaramanga, The Man With the Golden Gun

The supernumerary-nippled Scaramanga, played by the great Christopher Lee, may not be one for sensible artillery purchases, but The Man with the Golden Gun certainly knows how to dress a woman for optimal security — and cleavage. 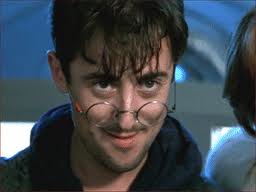 9. “I am invincible!” — Boris Grishenko, Goldeneye

8. “The distance between insanity and genius is measured only by success.” — Elliot Carver, Tomorrow Never Dies

Carver (Jonathan Pryce) is a compelling villain in a not-so compelling Bond film about a William Randolph Hearst-like media mogul who uses his control over said media to kickstart global warfare. The above quote demonstrates the fine line between being unhinged and just plain evil. Fox News could not be reached for comment regarding his passing resemblance to Rupert Murdoch.

7. ““Such nice cheeks too. If only they were brains.” — Ernst Stavro Blofeld, Diamonds are Forever

It's no coincidence that Bond’s most long-lived adversary was also quite the wordsmith. With this little verbal bon bon, he  nicely captures the mixture of  arrogance and casual misogyny that makes Blofeld (in this instance, played by Charles Gray) one of the franchise's best villains.

6. “Of course Vargas does not drink…does not smoke…does not make love. What do you do, Vargas?” — Emilio Largo, Thunderball

In the hedonistic world of James Bond, it’s almost unthinkable that any character would abstain from the above-mentioned vices, let alone all three. No wonder Vargas chose assassin as a career.

5. “The first one won’t kill you. Not the second. Not even the third. Not until you crawl over here and kiss my foot!” — Red Grant, From Russia with Love

Sean Connery’s Bond was a cold and ruthless secret agent, and as such, his adversaries were the stuff of legend, often digging into deeper and darker places than the more fleshed-out characters of the later films. Robert Shaw’s magnificent turn as the psychopathic Red Grant is one for the ages. 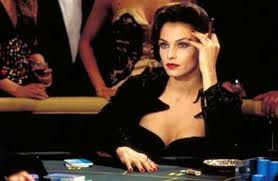 4. “This time, Mr. Bond, the pleasure will be all mine!” — Xenia Onatopp, Goldeneye

This line from the 1995 Goldeneye may be in keeping with the double entendres that distinguished so many of the earlier Bond films, but it's delivered by the most confident, badass female villain (played by Famke Janssen) that Bond has ever faced.  The scene marks the moment when (most of) the vicious sexism of the 007 franchise was left behind.

Joseph Wiseman laid the framework for the Bond baddies, and consequently, for the spy villain archetype itself. He's clinically insane, emotionally detached and obsessed with world domination, as demonstrated by the above sentiment.

That really says it all in a neat but expressive package, doesn’t it?  Normally a man of refined taste and precise language, even Blofeld has his breaking point. 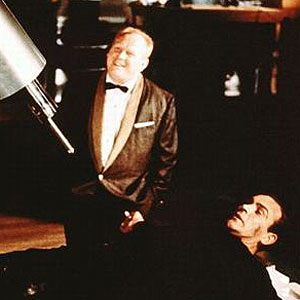 1. No Mr. Bond, I expect you to die.” — Auric Goldfinger, Goldfinger

Goldfinger's icily matter-of-fact response to the about-to-be-lasered Bond’s sneering inquiry, “I suppose you expect me to talk?”, is villainy at its streamlined best: no bad puns or goofball cackles, just pure malevolence.  Nobody chilled the blood like Gert Frobe. Nobody!

John Jarzemsky is a contributor at LitReactor, Twitch, and can be read semi-regularly at his personal blog, the ineptly named Super Roller Disco Monkey Hullabaloo! or on twitter @jtjarzemsky. He is big in Japan.