After scoping out Noah cinematographer Matthew Libatique's dark-but-revealing shot of the interior of the title character's reptile-laden ark, I find myself praying for a cameo by Samuel L. Jackson in which he lives long enough to say, "I have had it with these mother-fucking snakes on this mother-fucking ark."   Libatique, who was nominated for an Oscar for his work on Black Swan, tweeted the photo on Tuesday, along with the line: "Pre lighting on the holiest day of the year," an apparent reference to Yom Kippur.

The photo appears to prove that Aronofsky won't be following the part of the Book-of-Genesis story that says the pre-Flood Patriarch brought &mdash; depending on which interpretation you believe &mdash; at most seven pairs, male and female, of each animal on the planet. ("Unclean" creatures were limited to a single pair, and given the snake's role in the fall of Adam and Eve — you know, the story where seeking and acquiring knowledge is deemed a really bad thing — I'm presuming snakes fell into that category.) By the way, according to one Biblical parsing  I found on the net, the animals agreed not to procreate on the boat. Apparently, they did not have a strong union at the time. 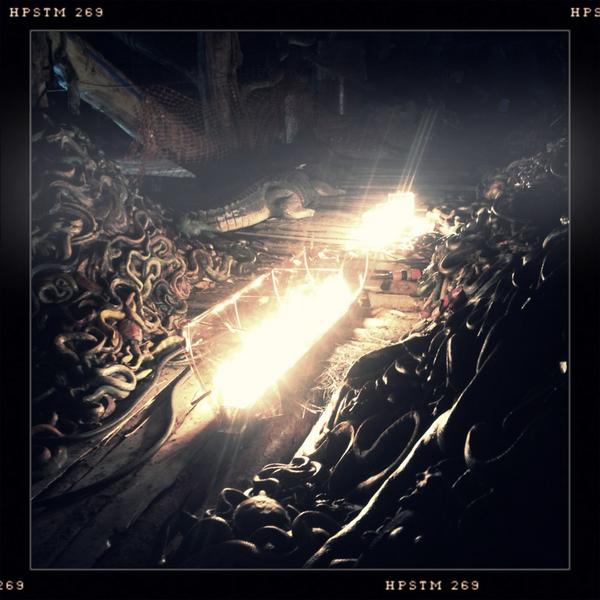 Then again, this is not your Father Flanagan's Noah, judging from the graphic novel series, Noah, For The Cruelty of Men, that Aronofsky created with executive producer Ari Handel and artist Niko Henrichon to help sell the film. If the movie follows the comic, Russell Crowe, who plays the title character, will be doing battle with such exotic creatures as "Watchers," 11-foot fallen angels that have no wings but six arms. Here in New York, we call them panhandlers.

Anthony Hopkins has been cast as Noah's 900-year-old father Methuselah and Jennifer Connelly (who is welcome on our ark any time), Emma Watson, Ray Winstone and Logan Leman will co-star.

And, with a little help from Above, Samuel L. Jackson!