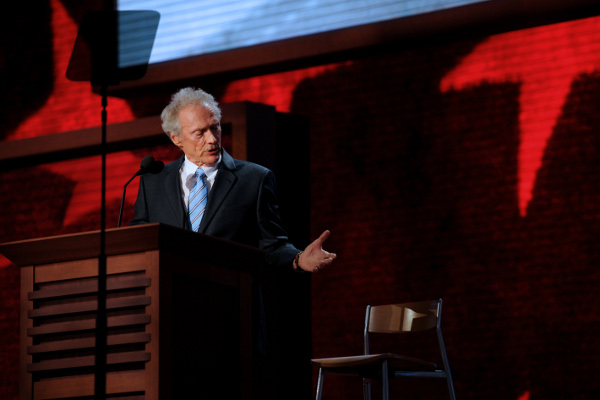 Clint Eastwood made Twitter's Day — or at least its night. The veteran actor and filmmaker's bizarre, aimless speech at the Republican National Convention in Tampa on Thursday night — to a chair that purportedly contained an invisible President Obama — brought out plenty of celebrity tweeters on the social media site.

As of Friday morning "Eastwood" was still trending intermittently on the Twitter, and a number of actors and filmmakers' comments were among the reactions to the Unforgiven actor's speech.

Among them was Magic Mike actress Olivia Munn who tweeted: "Clint Eastwood was talking to an empty chair at the RNC...No, that's not the set-up to a joke. Its not even a joke."

This Is 40 filmmaker Judd Apatow had fun with the subject on a more oblique level.  "Clint used to be Every Which 'But'Loose. Tonight he got loose,"  Apatow tweeted. The truncated film title was a reference to Eastwood's  1978 buddy picture with an orangutan, Every Which Way But Loose, which seemed to mystify Apatow:  "How does that title refer to a relationship with orangutans?" He wrote. "Really. How?"

Shaun of the Dead filmmaker Simon Pegg weighed in from the UK, tweeting: "Woken up to excited chatter in the US. Apparently Clint Eastwood had an argument with an empty chair regarding its political standpoint."