The marketing noise at Comic-Con is always such a cacophony, it can be tough-to-impossible to get tiny movies noticed in the chaos unless they've got attention-grabbing hooks. Like, say, finding a thumb drive inside a condom that just happens to contain the first-look teaser at Ron Perlman as a transsexual named Phyllis greeting his Sons of Anarchy son Charlie Hunnam (both in town for this weekend's Pacific Rim and SoA panels) and Bridemaids' Chris O'Dowd with a big, fat kiss. Movieline's got your first look at the indie comedy Frankie Go Boom!

3,2,1 … Frankie go Boom follows Frank Bartlett (Charlie Hunnam) who has been tortured, embarrassed and humiliated by his brother Bruce (Chris O’Dowd) – usually on film - for his entire life. Now that Bruce is finally off drugs and has turned his life around, things should be different. They are not. 3,2,1 … Frankie go Boom is a comedy about two brothers a girl with a broken heart, a sex tape, an angel and a pig.

Since Movieline was the first to debut Frankie Go Boom's poster featuring Perlman as "Phyllis," it's fitting that we bring you this glimpse of his post-op vamping. Let Perlman's "HER, MOTHAF***A!" terrify you into addressing the trans community with cowering respect. (Fun fact: I'm told it was Hunnam who suggested his Sons of Anarchy father figure play the transgender Phyllis.) 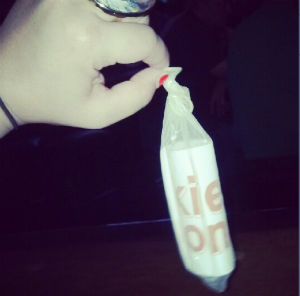 As for you other would-be attention-grabbers here at Comic-Con: Good luck topping the visceral recoil followed by "Oh thank God" relief I experienced when I picked up the Frankie Go Boom viral "package" last night and realized what was (or wasn't) inside...