An amusing-looking (and harmless) independent film called Iron Sky is hoping to make some noise at Comic-Con. The noise they've picked is that of goose-stepping — a publicity march of hot women dressed as pseudo-Nazis marching around the convention this Saturday. And you can hashtag your pics, too!

Iron Sky is a Grindhouse-y tale about Nazi descendents (led by Udo Keir!) living on the far side of the Moon, poised to invade Sarah Palin's America. A little campy, but it's in good enough fun, plus the special effects look remarkable for a low budget affair. So far my grandparents aren't spinning in their grave. Oh, wait, my grandparents don't have graves. They were incinerated.

Anyway, Saturday at the Con, the producers of Iron Sky invite you to “Catch the hot Iron Sky army girls marching in full formation for photo ops in San Diego's Gaslamp Quarter and outside the Convention Center Concourse.”

Catch the hot IRON SKY army girls marching in full formation for photo ops in San Diego's Gaslamp Quarter and outside the Convention Center Concourse on Saturday, July 14th from 8:30am to 7:00pm!

Tweet your photo with the IRON SKY babe army #IronSky #ComicCon #SDCC and come visit the film's official booth on the convention floor to claim your prize! Prove you found our army by showing us your photo on Twitter, Facebook, or Instagram and win some sweet IRON SKY swag!

A publicist confirms that Iron Sky's "Army Girls" will, in fact, be dressed like the female character on the film's poster – a Nazi invader played by actress Julia Dietze - and are meant to evoke the lost band of Aryans who, in the film, used rocket technology to wait out the post-war years. (Wernher von Braun you have some splainin' to do!)

Now, I've no doubt that the film's producers aren't dumb enough to have a gaggle of Eva Brauns jackbooting outside the Hilton Bayfront Hotel – surely the swastikas and Death's Heads will be kept to a minimum. (A representative of distributor Entertainment One tells Movieline the Iron Sky marchers will be wearing military costumes, with armbands similar to the one in the poster bearing the film's title treatment in lieu of a swastika/logo.) But if these babes lining up for TwitPics are actually secret “in-Universe” Space Nazis, isn't that just a little bit creepy? 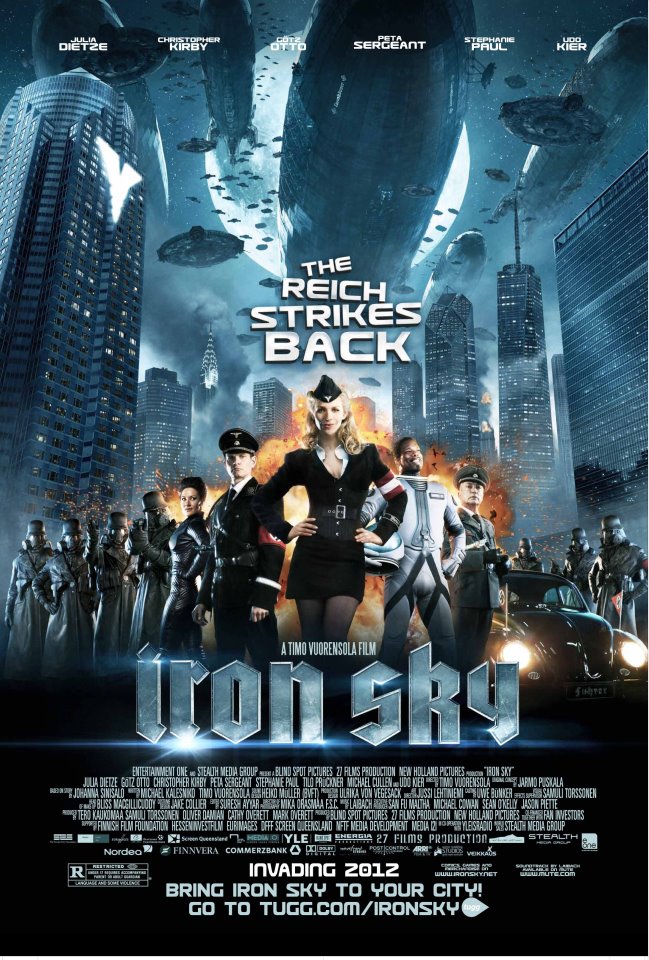 And maybe the obfuscation makes it even worse? Maybe the CSU-Bakersfield dropouts who answered a Craigslist ad for “women with hairstyles that can be pinned to look 1940s/also likes crowds” will have no idea that the costumes they'll be handed actually represents, you know, genocide?

I mean, I get it. It's the sort of marketing idea you spitball in a meeting, then, hopefully, someone quickly comes to their senses and says "Naaaaah." I suppose we'll just have to take a wait and see. I'll be on the scene in San Diego, wondering where my sense of humor and sense of decency intersects.