Summertime is blockbuster season, and with it comes the usual onslaught of promotional tie-ins. Naturally, The Amazing Spider-Man has generated its share of interesting merchandising partners. However, with great products come great risibility, and with over ninety promotional partners it was inevitable that some of the marketing would miss the mark. From odd adult eyewear to a line of cosmetics, take your pick of the items that failed in the goal to get your spending-sense tingling.

Promotional Partners in Crime
In this new era, with all the kids living on the inter-tubes, the concept of keeping the details of your film a secret is a dwindling enterprise. Directors endeavor to preserve the crucial plot points of their film, hoping those details can remain veiled with closed sets, limited script releases, performers signing non-disclosure agreements, and all manner of clandestine control of their intellectual property. That is why it becomes amusing when all these efforts become unraveled by unintentional reveals by the companies licensed to sell branded merchandise. (Obligatory spoiler-alert!) 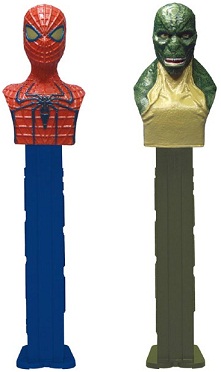 Up until last December the visuals of The Amazing Spider-Man’s villain – The Lizard – had been a closely guarded secret. That is, up until a certain confection company released promotional materials for retailers. Suddenly the web was abuzz because everyone had a sense of how he would appear – courtesy of The Lizard Pez dispenser.

A few months later key plot spoilers were discovered when construction-toy maker Mega Bloks released their tie-in play sets at an annual toy fair. Fanboys began drooling over the fact that key moments of the film were rendered via injection-mold plastic. One involved a mechanical battle frame Rhys Ivans would use to combat our hero, while another diorama exposed a battle at an underground laboratory. Yet another play set shows a climactic battle that ensues atop the Oscorp Tower. The addition of what were described as “S.W.A.T. Team Lizard” action figures tipped the hand of yet another plot detail. If you want to learn the details of upcoming films, go to aisle 8 at Toys-R-Us!

Common among summertime blockbusters are the food tie-ins, and Peter Parker does not disappoint here. Kelloggs and Keebler together have forged a shopping cart full of products, from a disturbing-looking cereal to Cheese-It crackers to fruit snacks.

The Spidey-branded Rice Krispy Treats not only get spider graphics on the box and wrappers, they’re comprised of industrially-dyed red pieces. These, I suppose are emblematic of the color associated with our hero. The end result is something… different; the unwrapped product takes on more of a viral appearance that seems to make it more appropriate for a film like Contagion. 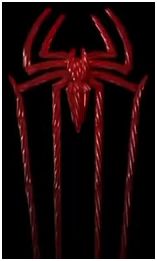 Twizzlers candy has also joined the fray, using their licorice as more than a supplemental confection: They’re selling it as a key component in the Spidey universe. The eponymous hero is shown crouched on a web made of the candy, and even the film’s logo is rendered in red licorice. Better still is the corporate explanation, which tells us in a press release just how perfect Twizzlers complements the Spider-Man moviegoing experience:

"Twizzlers Twisted Web! From the candy's signature red color to its web-like characteristics, our iconic Twizzlers Twists are the perfect complement to sweeten fans' movie experience."

That’s something for fans to bear in mind as they are about to breeze past the concession stand. And you thought deciding whether to see this in 3-D was going to be the big decision.

Surprising among the numerous promo partners is that the fast food licensing rights went to the lesser franchise Carl’s Jr. (Burger King carries those rights in most Latin America markets). Now, before stampeding to a local burger joint for a collector cup there’s something to bear in mind. On July 4 the Carl’s Jr. restaurants offered their “Spider-Man Eats Free” promotion. This actually means that anyone arriving at the restaurant decked out in full Spider-Man attire in theory received a free Amazing Grilled Cheese Bacon Burger. To get a sense of who might show up, behold what the company envisions for its own lobbies.

Across the Pacific we find our favorite niche territory marketing partner Jolibee has teamed up with Spidey. The Phillipine chicken magnate has once again offered up a collectors bird bucket – filled with its signature “Chickenjoy” – decorated in heroic graphics. Jollibee also offers a number of toy food promotions with our webbed hero, one of which makes me pause; the Spidey ring-toss toy has a rather curious design. Now, a better person may avoid mentioning this appears to display rectal violation of the web slinger, but amazingly I’m not better than that. Nor am I above noting how he seems to be enjoying things in this particular pose. Better to simply move on. 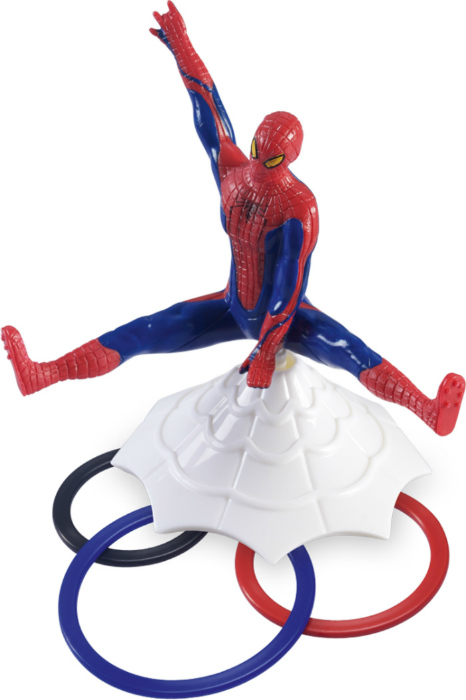 Roll Your Eyes-Play
It goes without saying that there are a crap-ton of toys associated with any given superhero film. One of the talked-about aspects of this reboot helps the kids out: In years past the tots had to contend with clunky web delivery contraptions to replicate the physiological spinnerets displayed in the previous three efforts. Now, even as the toys have not gotten better, Marc Webb’s Spider-Man has Peter Parker employing a mechanical web shooter means the kids will have a much easier time getting their Andrew Garfield on. Variations in design involve these toys launching various media, from twine to rubberized webs, to water. Parents will especially cherish the “Silly String” version, which can stain household fabrics and requires rapid replacement of the “web fluid.” 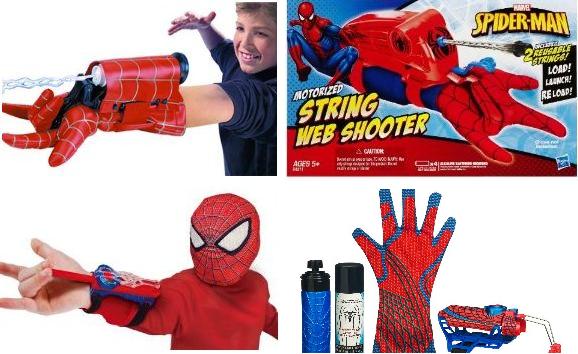 Among the action figures there’s one particular curiosity. Remember the scene in The Amazing Spider-Man where Spider-Man had to take to his dune buggy to battle an evil scourge? Of course you don’t remember, because nowhere in the franchise, nor the comic pantheon, does Spidey EVER get behind the wheel of such a conveyance. Despite that reality, your kids can relive the moment which never occurred. About the closest you can arrive to this object making any sense would possibly involve some random scene involving The Sandman from Sam Raimi's Spider-Man 3 – and that is a monumental stretch. 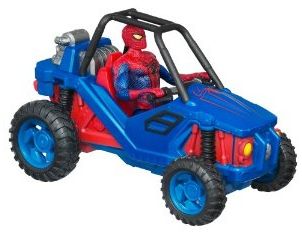 When you imagine the entire realm of the Spider-Man universe I’m certain the first thing to come to mind is an array of colored finger nail polishes. Cosmetic manufacturer OPI has released a line of lacquer colors in conjunction with the film. The hues range across the spectrum, with names that evoke the film. Number One Nemesis, Just Spotted the Lizard, Call Me Gwen-Ever, Into The Night, Your Web Or Mine, Shatter The Scales, and My Boyfriend Scales Walls. The last one, for the record, is white. All of them, for the record, make little to no sense. 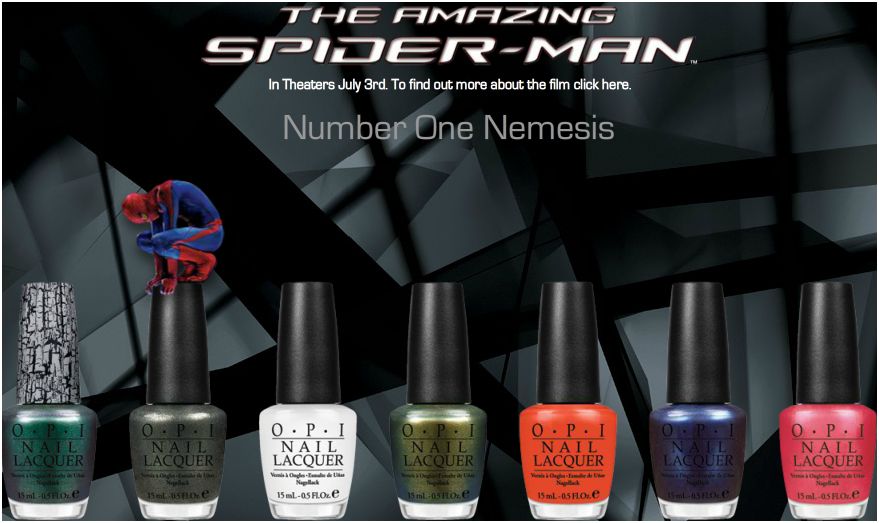 Footwear tie-ins for the kids are another commonality in comic book-based releases. The Amazing Spider-Man has generated quite a few different designs, but the most arresting has to arrive courtesy of Striderite. Not only does the design resemble the famed mask, but with each step the eyes flash. As the company states, “Your little super hero will feel like the real deal with light-up powers.” It’s a little difficult to gather, however, just how Spider-Man is particularly connected with the power of light. Clearly someone did their homework. 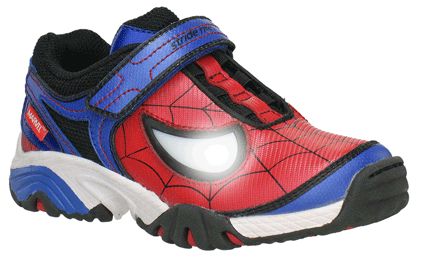 So let’s say you’re near a group of shrieking 6-year-old harridans and they are all sporting shoes that strobe. The retinal damage one may incur is a potential threat, but you can ward off those rays from their Spidey shoes with this functional and entirely sane-looking set of Spider-Man glasses. Sure, you may run the risk of getting kicked out of the Chuck E. Cheese if caught wearing these, but let’s be honest here; you probably deserve it. 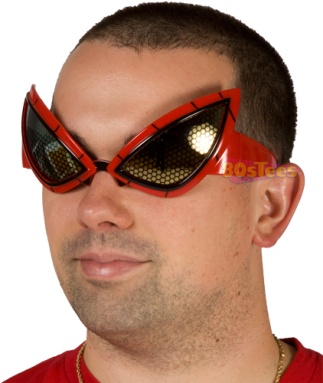