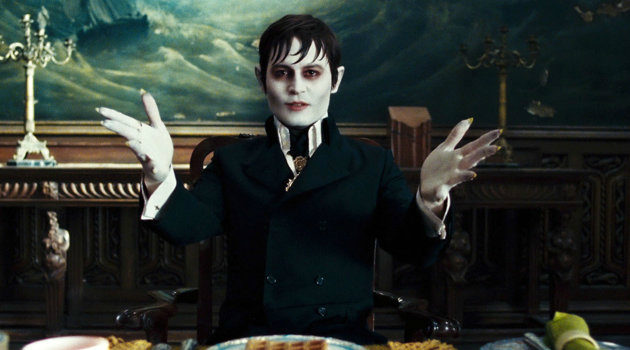 There are enough terrific, elegant old-style Tim Burton touches in Dark Shadows that, now and then, you might be fooled into thinking the once-mad genius had finally come back to his senses: A young girl gazes dreamily through the window of a train slipping through the New England countryside, the Moody Blues’ “Nights in White Satin” serving as an aural curtain for her reverie; a wispy ghost woman floats toward the waiting arms of a giant chandelier, her hair and tattered skirt winding around its crystals like jellyfish tendrils; a secret button reveals a passageway whose opening is framed by mechanical ocean waves and a cadre of cast-iron wolves raising their snouts to the moon in a hearty salute. Parts of Dark Shadows look lovely. So what happened to the story?

Burton used to be a madman; now he’s just a franchise. The vibrant inventiveness of pictures like Pee Wee’s Big Adventure (his debut) and the doleful elegance of his Batman movies and Sleepy Hollow have given way, over the past 10 years, to an excess of primary-color gimmickry. Charlie and the Chocolate Factory and Alice in Wonderland are loaded with self-conscious wonder and strained jokes masquerading as clever ones. Similarly, Dark Shadows suffers from the now-predictable Tim Burton pile-on: Like a matron who’s gone mad for garish jewelry, he just doesn’t know when to stop.

It didn’t have to be that way. Dark Shadows takes its inspiration from the late-’60s spooky-Gothic soaper of the same name, starring Jonathan Frid (who died just last month) as a lovesick vampire named Barnabas Collins. The show was just the thing to scare the bejesus outta you while you enjoyed your bowl of after-school Cheerios, and my friends and I adored it. Clearly, Burton did too, because there are dots and dashes of affection in this Dark Shadows. The script, by John August and Seth Grahame-Smith, resuscitates many of the original characters and keeps them fairly close to the spirit of their forbears, though only the movie’s opening sequence – the finest section of the picture — is set in the early 1800s. Johnny Depp plays Barnabas Collins, formerly the son of a rich Maine fishing family, now a lost 19th-century soul transplanted to early ’70s New England, a land of banana-seat bikes, frilly granny dresses and Donovan records. Eva Green plays Angelique, a witch who begins spinning a never-ending web of revenge around Barnabas after he spurns her. Bella Heathcote is Barnabas’ original true love Josette DuPres and her 20th century reincarnation Victoria Winter, two women — or, rather, two versions of the same woman – who drive Angelique to diabolical, murderous measures.

Here’s how it all plays out in the Burton version: Angelique, after murdering Josette, turns the then-human Barnabas into a vampire and locks him in a coffin, which is then buried. He remains there until the 1970s, when he’s dug up accidentally. (He wastes no time in makes a tasty meal out of some hapless construction workers.) He treks to his old homestead, Collinwood Manor, and finds that much has changed: The mansion's current mistress is Elizabeth Collins Stoddard (Michelle Pfeiffer), an ice-cool lady whose necklace collection appears to include the complete stock of the Trifari, Monet and Napier factories combined. Elizabeth lives in the old house with other members of the extended Collins family, including her disaffected teenage daughter Carolyn (Chloë Grace Moretz) and her semi-orphaned nephew David (Gully McGrath), a troubled lad who keeps having visions of his dead mother. Also floating around are David’s layabout dad, Roger (Jonny Lee Miller), who seems to exist in the story only as a hanger for loud plaid jackets, and blowsy, horny psychiatrist Dr. Julia Hoffman (Helena Bonham Carter), who can’t keep her mitts off mystery-man Barnabas.

If you think that’s too many characters to fit comfortably or reasonably into any story, you’re right. Dark Shadows is a rambling affair in which characters who ought to be central to the plot — Josette/Victoria, for instance — drop out of sight for long, mysterious stretches. Some of the performances are extremely entertaining: Green makes a great bad gal, a lanky temptress in an assortment of vixenish Ossie Clark-style gowns and pantsuits. (Costumer Colleen Atwood does right by her.) And Depp is marvelous when he’s not called upon to look quizzically at lava lamps and such: His hair has been styled into great, Frid-like pointy bangs, but his performance is more homage than impersonation. Just as he discovers he’s been turned into a bloodsucker, he surveys his newly sprouted Nosferatu talons with a mix of wonder and horror. The scene takes place in the movie’s semi-naturalistic Gothic opener, before Barnabas has acquired his white warpaint pallor, and it’s the kind of moment that makes you wish Depp would play more roles with less makeup.

Because, through most of Dark Shadows, he’s wearing a lot of it, and it’s almost as heavy as the shtick Burton has saddled him with. The movie is overloaded with gags about how tacky the ’70s were, and the routine gets tired, fast. Barnabas recoils from the bright-eyed visage of a Troll doll, and blanches when he accidentally hits the buzzer on an Operation game. Sure, lava lamps are hee-larious, and yet — does everything in Burton’s world have to be so retrolicious?

Dark Shadows needs a lot more soap and a lot less kitsch. I fell in love with the movie’s opening sequence, which lays out the movie’s back story — if only Burton had taken that preamble and fleshed it out, instead of just cranking up the old gag machine. The opening sequence captures what was so compelling about the TV show, despite its rather modest production values: It was true to the spirit of Gothic literature while also being dishy and entertaining enough for the masses (i.e., a seven-year-old me). Burton outlines Barnabas’ origins with the same courtly spookiness he brought to his sort-of Washington Irving adaptation Sleepy Hollow: We see Josette, driven to madness by Angelique and throwing herself off a steep cliff. Barnabas runs after her and stands on a rock amid the crashing waves, gazing into the mist and seeing only a bleak eternity. The image — rendered very handsomely by DP Bruno Delbonnell, though I’m sure there was plenty of CGI help — is lifted straight from a famous painting that you’ve probably seen even if you think you haven’t, The Wanderer Above the Sea of Fog, by the German Romantic painter Caspar David Friedrich. Why couldn’t Burton have sustained that moody elegance, while also packing some of his loopy wit around it? Beyond that opening sequence, there’s nothing very dark or shadowy or even just imaginative about Dark Shadows. It's proof that the candyman can’t.