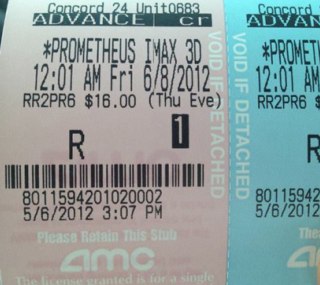 Speculation has swirled for a while now about whether or not Fox and Ridley Scott would pursue a PG-13 rating for its blockbuster hopeful Prometheus, which, if previews and disgusting animated GIFs are any indication, has plenty of raw sci-fi terrors to back up an R. But one fan who locked up an advance ticket to the film might have unintentionally solved the ratings puzzle.

Collider passes along the accompanying photo, which an IMDB user apparently nabbed in advance over the weekend and passed along with the giddy declaration: "AS PROMISED!! CHECK THE LINK ABOVE, PROMETHEUS IS RATED R!!!!" ZOMG, etc. Sorry, kids! May I suggest Bully?