The 9 Most Intriguing, Still Perplexing New Clues as to What the Hell’s Going on in Prometheus

Ridley Scott’s Alien prequel Prometheus made the biggest impression on the geek faithful Saturday at WonderCon, where glimpses into the film’s set-up and ensuing space shenanigans were revealed in a new two-and-a-half minute trailer for the sci-fi action film. The trailer (not to be confused with the more truncated one-minute teaser that leaked yesterday) offered more hints at spoilers and narrative threads for fans to try to piece together, not to mention some very interesting new imagery – but how much do Prometheus-watchers really want to know? [Spoiler alert, obviously.]

That’s the intriguing question ahead as Fox carefully disseminates more and more information about Prometheus and the mysterious story it contains. On the one hand, Friday’s teaser and Saturday’s WonderCon trailer still only comprise a series of (admittedly awesome) shots and snippets of scenes, seemingly key dialogue, and ominous soundscapes, leaving most of the plot and potential reveals up to a viewer to piece together. But the more we see of Prometheus, the more these sparse rations of information add up into a jumble that almost feels like too much information.

After presenting the new trailer, which you can watch below, Scott, co-writer Damon Lindelof, and stars Charlize Theron and Michael Fassbender answered a handful of Twitter questions before making their way backstage, where the group (minus Theron, who stayed behind to attend her Snow White and the Huntsman panel) fueled even more Prometheus speculation. Here are the nine most provocative, intriguing, maybe-spoilery and potentially revealing clues the Prometheus filmmakers spilled at WonderCon.

1. New trailer, new clues
Prometheus’s setup is revealed in the new trailer, which shows Noomi Rapace’s scientist-heroine Elizabeth Shaw and Logan Marshall-Green’s Holloway presenting evidence of a startling new discovery: Multiple ancient civilizations have been found which all use the same mysterious pictograms – and Shaw believes those symbols are an invitation sent by an unknown entity to seek out their makers, prompting the crew of the Prometheus to depart into space on their journey.

That seemingly leads our heroes to a planet where their probes discover life forms. Which somehow leads to this:

Is that... a baby facehugger being extracted from close quarters with Shaw, prior to the hallway-stumbling in LeeLoo-style skivvies glimpsed in the trailers?

2. The devil is in the dialogue
Consider two key quotes that bookend the trailer. The first, spoken by Theron as the icy corporate tool Meredith Vickers: “A king has his reign and then he dies… it’s inevitable.”

And the last, uttered by Fassbender as David, the ship’s android servant: “Big things have small beginnings.”

Now also consider Theron's response to the last fan question of the day: What does Michael Fassbender smell like? "Musk and chilies... sometimes mixed in with a little mint."

Selecting a few questions sent in via Twitter to answer onstage, Lindelof picked one burning question that fans have been dying to know. “There are rumors on the net that Fassbender gives birth to mankind in the movie,” he read. “Are these rumors true?

“Absolutely,” answered Fassbender with a coy Mona Lisa smile. Was he serious? Hard to say. Did Lindelof just randomly pick that one Twitter question out of many to address onstage with a non-answer? Another mystery to add to the list. 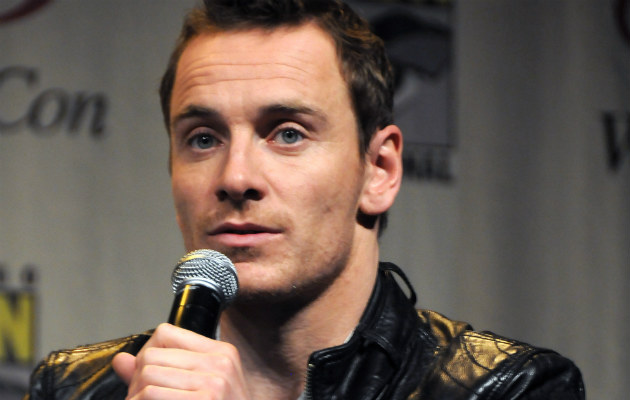 5. Is Prometheus really just a story about a guy looking for love?

During the panel, Lindelof joked with Theron and Fassbender. Given the film’s mysterious nature, how do they explain to friends and family what Prometheus is? “I told them it was a romantic comedy, so they’re going to be shocked,” quipped Theron.

Fassbender agreed, describing his character David – an android with lifelike human qualities, a la Bishop – as “just a guy trying to find love in all the wrong places.”