'Funny, You Don’t Look Jewish’: 7 Mel Gibson Revelations from the Get the Gringo Premiere

Wednesday night in Austin, Texas the embattled (but cheery) Mel Gibson popped down to the Alamo Drafthouse to premiere his latest film/star vehicle, the darkly comic Mexico-set action pic Get the Gringo. Though his most recent and public feud with Maccabee screenwriter Joe Eszterhas took a notoriously ugly turn of late, Gibson was jovial and in a joking mood – even when moderator Harry Knowles dared to make reference to Gibson’s documented anti-Semitic remarks.

The film, co-written by Gibson, director Adrian Grunberg, and producer Stacy Perskie over the course of a year and a half (from an idea by Gibson), follows an American career criminal known as Driver (Gibson) as he flees American authorities and makes a break for the U.S. –Mexico border with millions in stolen cash. Thrown into a Mexican prison modeled on a real life “pueblito” – an effective working city operating within the confines of a fortress run by gangsters and corrupt officials – Driver uses his unique set of skills and a newfound friendship with a street-smart 10-year-old (Kevin Hernandez) to survive and plot his way out.

Gringo is an effective and at times strangely winning B-movie vehicle for Gibson, whose precise and hardened Driver doles out wisecracks and ruthlessness in equal measure, orchestrating the downfall of a network of interconnected baddies while redeeming himself through his friendship with his young sidekick and the kid’s comely mother. Squibs of blood fly fast and furious as shoot-outs, torture scenes, and an energetic opening car chase scene keep the action pulse quickening throughout; it’s the kind of movie in which Gibson dives sidelong through the air in slow motion in a gunfight and nails a bad guy through the eye with his superhuman shooting skills without getting so much as grazed by a bullet.

In other words: It’s better than your average direct-to-DVD title and a fleeting return to the smart-ass Mel Gibson, movie star, that audiences fell for in films like Lethal Weapon. 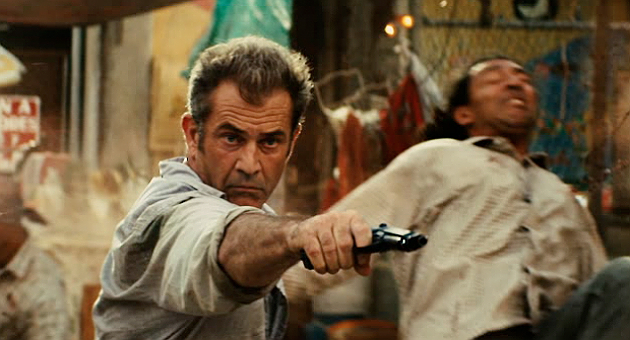 But are audiences ready yet to forgive the once-adored actor for his personal troubles and transgressions? Gibson’s well-publicized meltdowns are likely partially to blame for Gringo’s unusual release strategy; instead of a traditional theatrical release, the film will release via Direct TV on May 1. Which brings us to The Awkward Moment at the Gringo premiere when Gibson’s personal troubles came front and center.

It was late in the post-premiere Q&A (which was streamed online and shown via satellite in participating theaters) when Knowles turned to director/co-writer Grunberg to address the elephant in the room. “I see that you’ve got a Star of David on,” began Knowles. “How was it -- did y’all have any trouble working together or anything?”

“I hate his guts,” Grunberg joked, before nodding off any suggestion of ill relations with Gibson. “I’ve known him for six, seven years.”

Moments later, co-writer Perskie chimed in with an admission of his own: “I’m Jewish.”

The attendees around me at the Los Angeles screening audibly gasped at Gibson’s joke, a less than successful attempt at levity. But just like that, the moment when the entire night could’ve bombed just simply passed. Knowles, his basic duty done, moved on to easier topics. What music did the Gringo gang listen to during filming? (“The music of the spheres,” was Gibson’s non-serious answer.) What about that Viking movie? (Oh, that.)

So it seems that Gibson’s not quite tiptoeing around his past remarks. It's business as usual, perhaps – why make a big deal of it? Whether or not that line of flippant joking in the general direction (if not near vicinity) of his most controversial comments to date should affect how film audiences see him is a matter of opinion. For now, mull it over and chew on six more revelations Gibson shared Wednesday night.

Tags: Get the Gringo, Mel Gibson