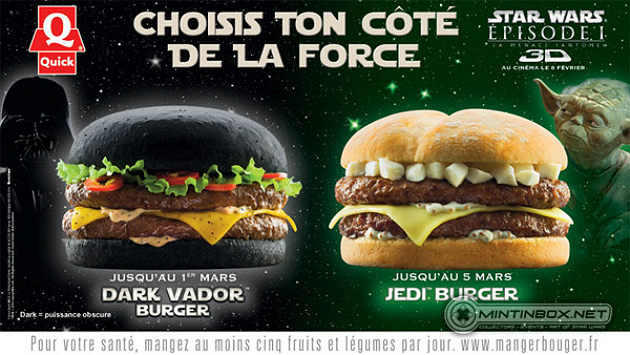 If Yoda shilling for cup noodles made your skin crawl and your soul cry “Nooooo,” get ready to feel the Force sell-out even harder, and weirder, with a recent spate of George Lucas-approved shameless Star Wars marketing tie-ins. First, there’s Darth Maul and Yoda stumping for Lipton iced tea. Embarrassing, but that’s nothing compared to the super disgusting idea of a Darth Vader-themed hamburger featuring black-dyed buns. Blech. These are not the burgers you’re looking for, at least not to eat.

The Vader burger is offered at French-Belgian fast food chain Quick, along with two other new sandwiches, the Dark Burger on dyed red buns a la Darth Maul, and the Jedi Burger, topped with diced mozzarella cheese cubes. The special Star Wars fare will be available for a limited time from January 31 to March 1, though the Vader burger, which is comprised of “two minced beef patties topped with one slice of melted pepper Cheddar cheese, pepper sauce, endives and rings of red pepper all between black-colored buns sprinkled with black pepper and poppy seeds” and is explicably spelled “Vador” burger in this Quick ad, will get an extended run through March 5. [Ed. Courtesy of commenter "AFrenchman": "Darth Vader became Dark Vador in France," which explains the alternate spelling but not the bizarre choices in burger composition.] 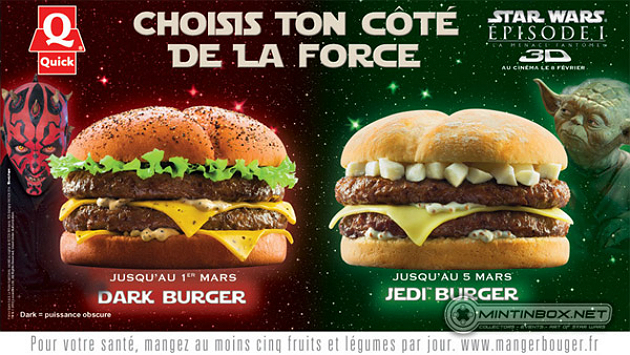 You can thank the upcoming 2012 release of Star Wars Episode I -- The Phantom Menace 3D for the upsurge in shameless cross-branding, which is fine and a part of the business, especially when reintroducing a film to newer audiences and older fans who are now old enough to drink iced tea and order gross burgers at the drive-through. Still, that doesn’t excuse Lucas from the real problem: These burgers look completely disgusting.

Who in their right mind will be ordering the Vader burger? French diehard Star Wars fans, I’m sure, and the kind of perversely curious fast foodies who thought the Double Down sounded intriguing. Oh, and maybe the members of the International Church of Jediism, followers of a new faith whose quest for recognition was immortalized this week by the Taiwanese animators at NME.

According to the NME news video, these real life Jedis hang out drinking Mountain Dew and eating Doritos. Substitute the Quick Jedi Burger for Communion bread and everybody wins, no?