'Pacific Rim' TV Spot − Is The Monster Lame Or What? 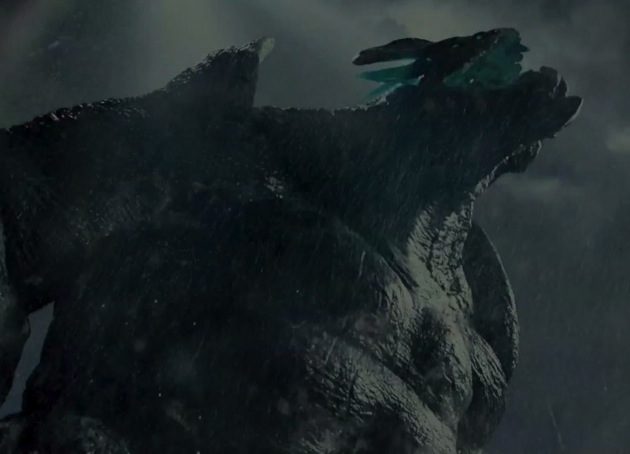 Why am I not excited about Pacific Rim?  I'm mostly a fan of Guillermo del Toro's work, particularly the superb Pan's Labyrinth, but the three teaser clips that have been released for the filmmaker's hotly anticipated mechs-vs-monsters summer sci-fi film have all left me cold. Part of the problem is that they're all virtually the same. The new international TV spot, for instance, is a condensed retread of the earlier trailers, and its brevity draws attention to what I think may be the film's biggest weakness: a lame monster.

Yes, the giant human-piloted Jaeger mechs are impressive — even if they defy science and physics — but their enemies, which are called Kaiju, Japanese for "strange beast,"  don't look the fearsome, formidable part they're supposed to play in the picture. (If you're okay with spoilers, this review of the Pacific Rim script indicates that the Kaiju overwhelm the Jaegers.)

Clearly, del Toro is paying homage to the Japanese Toho Studios kaiju films of the 1950s, '60s and beyond — the Godzilla franchise being the most well known of them.  The problem is, the creature in the Pacific Rim looks like it came directly from the set of one of those hokey movies and didn't stop by the visual effects department to get a rad new upgrade. Remember, Gamera, the amusing flying turtle (which was not a Toho creation)?  If you took the body of that '60s-era monster and grafted the head of Roland Emmerich's 1998 Godzilla onto it — not a movie that any filmmaker should be referencing — then you'd get a creature similar to the one you see in the photo above and trailer below.

Perhaps del Toro is keeping more fearsome creatures under wraps. The Kaiju apparently hail from another universe — a kind of interstellar Monster Island — so conceptually there could be more than one species. I hope so. If the creature in the teasers is all we get, then Pacific Rim could suffer from a real tension deficit.

One other thing:  It's time to give Idris Elba's "Today, we are canceling the apocalypse!" speech a rest.  It was rousing the first 10 times I heard it — in January. Three months later, it's ripe to be satirized, and the movie isn't out until July 12.

What do you think?