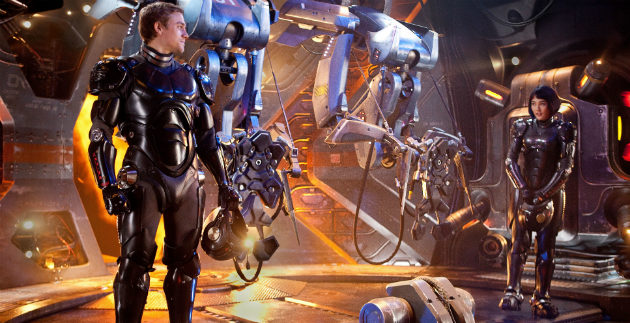 Holy Macross, the first trailer for Guillermo Del Toro's Pacific Rim is here, and I can't believe what I'm seeing! Dimensional rifts, enormous monsters, and sweet sweet giant mechs battling it out over the streets of a large city while the helpless populace flees. Someone finally figured out how to update the kaiju genre without ruining it. Glory be!

I've been keeping my powder dry on this since Del Toro isn't always 100 percent successful making films that live up to his vision, but you know what? Done. I'm now an extreme religious fundamentalist for Pacific Rim. Watch this trailer and you will be too:

“Today, we are canceling the apocalypse!” What a line, and considering the timing of the trailer, what a lovely middle finger to everyone ruining your Facebook feed with nonsense about Mayan calendar realignment. Pacific Rim looks like it lacks even a shred of knowing campiness or edgy BS; it just coasts on a sincere awesomeness of the sort we haven't really seen since the '70s, only with funding.

It's The Space Giants with humans controlling the robots! It's Robot Jox with a budget. It's the live action Robotech* movie we've been dreaming of since the '80s. It's anything you want it to be because it loves you more than anyone else ever could, and will probably send you your favorite cupcakes on your birthday.

* Yes, we know Robotech was cobbled together from Macross, Mospeda and Southern Cross. If you claim to have seen any of them before you saw Robotech and you aren't from Japan, I don't believe you.